A Look at NASA's Planetary Budget

Correction
Jason Perry asked where the funding for Cassini was in the budget I posted below.  The proposed document I looked at didn't discuss Cassini at all.  I went back to the original Bush administration FY09 budget and found, "Cassini has been transferred to the Outer Planets Program."  This would mean that a substantial portion of the money I "projected" from that line item to future mission development would not be available for building future planetary craft.

I want to re-emphasize that the budget analysis was not meant to be precise -- almost all the guesstimates for future mission costs, for example, are certainly wrong in the details.
Rather, the message is that while $1.3B per year for planetary exploration seems like a large amount, it does not allow for lots of new missions to be added to the roadmap in the coming decade.  Running out existing programs and plans likely will use up available funds unless Congress appropriates a larger budget.
Original Post
In this blog entry, I'll look at the types of planetary missions that NASA may be able to develop in the coming decade. I'll start with a proposed budget for this current Fiscal Year (FY09) and extrapolate into the future with some educated swag costs of potential missions.
All figures presented here come from a proposed (not passed) House budget for FY09, which means that many of the specific numbers will change before it becomes law. If you are so inclined, the proposed budget figures can be found buried here. If I understand ESA's budget correctly, it spends about 434M euro (~$555M) for its entire science budget (not including another 585M euro for Earth observations). (ESA's budget figures are not directly comparable to NASA's because ESA's member nations pay for the development of scientific instruments outside of the ESA budget. Science instruments are not a trivial expense, and this likely adds tens of millions of euros to ESA's effective budget.)

What does all this mean for future NASA planetary exploration?

First of all, it is instructional to look at the top line, which is approximately $1.33B for FY09 to development new missions, operating in-flight missions, analyze data from on-going and past missions, and develop new technology for future missions. The development of new missions gets ~$752M or ~57% of the budget and everything else gets ~$575M or ~43% of the budget. That second, "everything else" category is a big bucket of money. When you hear of NASA trying to save money by reducing mission operations for missions past their prime mission, it is because dollars spent on old missions can't be spent for future missions.

Where is the money for future mission development budgeted to go? Here is what's in the proposed budget: 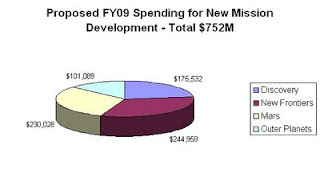 If I understand the implications of the Mars Science Laboratory (MSL) slip, a good chunk of the outer planet mission money may go to fund the MSL cost overruns. That would be one of the reasons that the Jupiter Europa Orbiter is planned for lauch 11 year hence.

The current fiscal year is merely a snapshot in time. What is perhaps more interesting is to look at what budgets like this might mean for planetary mission development over the next decade. For this exercise, I'll assume that future budgets, adjust for inflation, are approximately the same as current budgets. I'll also make some guesstimates about what several categories of proposed missions would cost in FY09 dollars (an exercise where I'm bound to be wrong in the specifics because the figures I've seen quoted have assumed wildly different base FY years).

If NASA is spending $752M a year to develop new missions, what can it afford over the course of the next decade? Here is one possible breakdown, with assumptions for three Discovery and two New Frontiers missions:

Click in image for larger view. Dollars in $1,000s.
(New Frontiers costs assume $650M for the spacecraft and $100M for the launch vehicle, with the latter a swag.)

As I've said, the details are certainly wrong here. NASA can also decide to change how it allocates money (for example, do fewer Discovery missions to beef up the Mars program). So take this as an example of one possible roadmap constrained by approximately current spending levels. If my analysis has any validity, this allocation of mission development funds seems to mean is that NASA may already be committed to its major planetary mission roadmap for the next decade

- A Mars program consisting of MSL, ExoMars contribution, and one medium sized mission

It will be interesting to see if the Decadal Survey in progress to plan the roadmap for the next decade will hold to these priorities.

Here is the Planetary Science budget from the proposed FY09 budget referenced above: 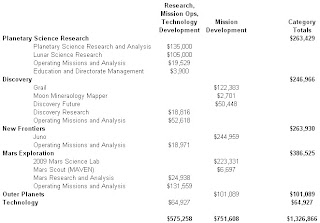