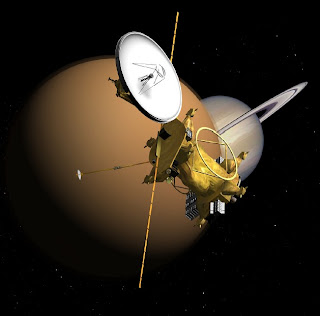 The final Europa and Titan orbiter proposals have been on-line for several days now. (I apologize for my slow response, but am working against a deadline for a paper of my own.) These massive (400+ pages each) tomes provide an incredible wealth of detail for both missions. Both documents, however, focus only on the NASA orbiters -- the ESA documents describing their possible contribution are still to be posted. (However, summaries of the full missions from both agencies are also available at the same web address.)

As I write this, the heads of the planetary programs for both agencies should have met on Feb. 12 (no word if they did or not). As I understand the process, they may have selected the target. If, however, no technical or cost issues ruled out one of the missions and the science upon review were equally compelling, the agencies may ask their scientific advisory boards for help in selecting the target.

The final documents are so detailed that trying to summarize them in a blog entry is virtually impossible. Jason Perry at The Gish Bar times as handled this problem by focusing on the studies the Europa orbiter would do in a series of Io flybys and the science that could be done at Io with the ground penetrating radar. I'll take a similar tact and focus just on a few highlights of the Titan orbiter mission that I found especially intriguing.

However, you may also find a short summary of a possible Russian Europa lander posted at the Unmanned Spaceflight forum by Ralph Lorenz interesting.

What I found most intriguing about the Titan orbiter is how tightly focused the mission is. Just six instruments are included in the payload, and each it tightly tied to science goals at Titan (although they fortunately would also greatly advance our knowledge of Enceladus during a campaign of flybys of that moon).

Two of the instruments focus on the Titan surface and subsurface:

The High-Resolution Imager and Spectrometer (HiRIS) would map Titan at 50 m resolution in three near and mid-infrared channels (2.0, 2.7, and 5 μm) where windows are present that allow clear views of the surface. This resolution is an order of magnitude better resolution than that achieved by Cassini's radar imager. (An imaging radar instrument was not selected for this mission proposal because the high orbit (1500 km) required to clear the atmosphere would have required a massive instrument with unacceptable power and data requirements.) HiRIS will also map the surface at 250 m resolution in three ranges of spectral bands to examine its composition (0.85-1.75, 1.9-2.2, and 4.8-5.8 5 μm).

The Tian Penetrating Radar and Altimeter will map the surface topography (elevation)and the sub-surface structure down to 5 km below the surface. (Jason Perry has a non-technical explanation of ground penetrating radar.)

The descriptions of these two instruments show how difficult the study of Titan's surface and subsurface are. The thick, aerosol laden atmosphere is clear only in specific spectral bands. The depth of the atmosphere requires that the orbiter study Titan from a height of 1500 km, limiting the capabilities of both HiRIS and the radar. Contrast that with the Europan orbiter which would achieve resolution at Europa of 1 m with its camera and penetration of the surface to 30 km with its radar from an orbit of 100 km.

For three instruments, however, the thick atmosphere of Titan allows detailed study:

The Polymer Mass Spectrometer would directly sample the atmosphere during flybys and aerobraking to determine the composition of molecules much more complex than those that Cassini could measure.

The Sub-millimeter Spectrometer would study winds and abundance of carbon dioxide and nitrile in the atmosphere from 200-1000km.

The Thermal Infrared Spectrometer would study composition and temperature of the atmosphere in the 30 - 500 km range.

Two additional science instruments round out the orbiter's compliment:

The Radio Science and Acceleromter instrument would study the temperature profile of Titan's stratosphere and troposphere and its gravity field.