The current issue of Aviation Week and Space Technology (2/23) has a few tidbits that I haven't seen elsewhere that I'll pass along. 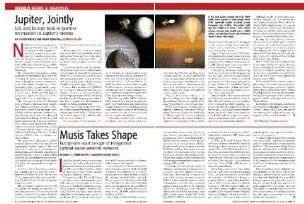 The key issue with the Titan Saturn mission was the the concept was less mature than for the Jupiter Europa mission. The reviewers were concerned about details of the engineering proposal, the propulsion system, and trajectory. They also felt that the mass margins were too small to handle possible increases in mass that could have caused it to be unable to be launched with its stated launch vehicle. The article doesn't say whether there is a launch vehicle with the mass margin that would be too expensive or if there simply wouldn't be a good alternative.

NASA is reviewing whether or not to use Advanced Stirling Radioisotope Generators (ASRGs) in place of the plan of record Multimission Radioisotope Thermoelectric Generators (MMRTG). ASRGs would use a fraction of the plutonium of the MMRTGs, potentially leaving enough in NASA's stockpiles to fuel other (especially smaller missions of New Frontiers or Discovery class) missions. The key issue whether the ASRGs could be validated in time, particularly since they have moving parts that cycle 100 times per second and must do so reliably for 15 years.

NASA plans to continue to study Titan missions to be ready to proceed should the Decadal Survey make a mission to return to Titan a priority.