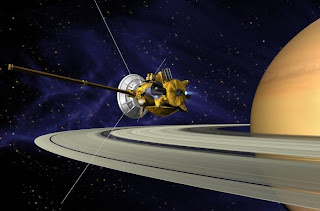 The Cassini management has approved a mission plan for a seven year extended extended mission (XXM) -- also known as the Solstice mission -- that would continue explorations of the Saturn system until 2017. The Planetary Society has an in-depth description of the mission goals and plans. For those that want a quick summary, I'll provide one here.

Currently, the mission is in the midst of a two year extended Equinox mission. At the end of that time, the mission management expects to have healthy spacecraft that would explore for many more years.

The mission planners had a number of goals they wanted to achieve. The first was to last until the summer solstice arrives in the Saturn system to provide a complementary view to the winter season that was present when the spacecraft arrived. (A Saturnian year is 29.5 Earth years.) That would extend the mission an additional seven years beyond the end of the Equinox mission. For the Solstice mission, the planners wanted to maximize the number of encounters of Titan and Enceladus to both further the mapping of these worlds and to look for changes. At Titan the changes would be in the weather systems and at Enceladus they might be to the system of geysers. At the same time, the planners wanted to achieve as many close encounters with other moons as possible. At the end of the mission, the spacecraft needs to be disposed in a place where there will be no chance of accidental collision with and contamination of either Titan or Enceladus.

At the same time, the planners had a number of constraints. Foremost is that the spacecraft will have used four-fifths of its fuel supply by the end of its current extended mission. So the last seven years would have to get by on a quarter of the fuel that was used in the first six years. In addition, the mission will have to be done with less money a year than it currently spends ($80M/year). The Planetary Society blog doesn't list say what the new budget will be.

The mission that the planners came up with promises to be exciting with 56 flybys of Titan, 12 of Enceladus, three of Dione, 20 orbits that pass just outside main rings, and a final 23 orbits that pass inside the ring system just above the cloud tops of Saturn. (These are just the highlights -- many other observations would be carried out in addition to these encounters.) In the last phase of the mission, Cassini will be able to replicate the magnetosphere and gravity measurements that the Juno mission will do at Jupiter. (Cassini lacks the instruments that Juno will carry to look deep into Saturn's atmosphere.) At the end of the mission, Cassini's fuel should be all but gone, the spacecraft will be set on a course to plunge into Saturn's atmosphere.

The Solstice mission still needs to be approved, especially the end of the mission plan to dispose of the orbiter into Saturn. The cost of the mission also will not be trivial. Apparently the mission management looked at trying to get by with $40M a year, but that apparently was too tight. Let's say that the mission can be done for $60M a year. Over the course of the seven years, the cost almost will equal the cost of doing a Discovery mission. For myself, this would represent a bargain. I have trouble conceiving of any other mission that could return the science and awe of the Solstice mission for the money that would be spent. 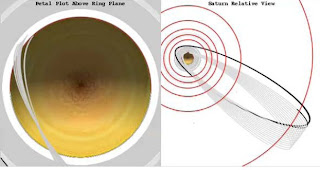 Final close up orbits just above Saturn's clouds. Click on the image or here to go to a presentation on the options considered and science goals of the Solstice mission. The discussion of the science goals starts about the middle of the presentation.

Jason Perry has been exploring the views that Cassini would have of several of the moons during the Solstice mission, and he has provided the following examples and captions: 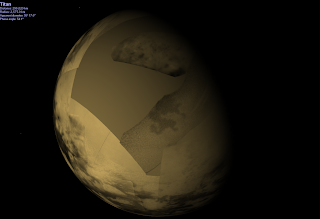 Despite the fact that Cassini will be flying by Titan 56 times during the XXM, my favorite Titan encounters is actually a non-targeted one on July 10, 2017. This encounter will
provide our best opportunity to image Kraken Mare at excellent emission angles. The XXM mission will provide scientists with an opportunity to monitor Titan's polar lakes. 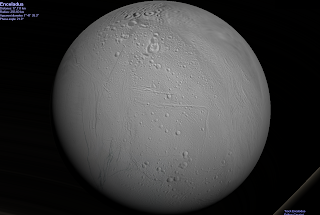 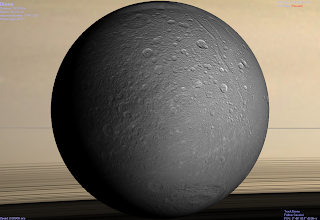 Cassini will fly by Dione three times during the extended mission, including one encounter in December 2011 that will take the spacecraft over a set of unusual pits that may have a cryovolcanic origin on the moon's leading hemisphere.