Other Science by the TSSM Orbiter

The Titan Saturn System Mission (TSSM) flagship proposal has received considerable attention both at this blog and many other places. There are now over 600 pages of detailed mission description covering the orbiter and the Titan balloon and lander as well as a 39 page summary of both (available at http://opfm.jpl.nasa.gov/library/ and http://sci.esa.int/science-e/www/object/index.cfm?fobjectid=44185#). (The balloon is more correctly termed the 'montgolfière'.) If you are not familiar with this mission, this site offers an overview (click on the submenu at the left for more detail)

In a few days or weeks, we should know if this mission or the competing Europa-Ganymede-Jupiter flagship mission is accepted at the next Flagship (>$3B) mission. 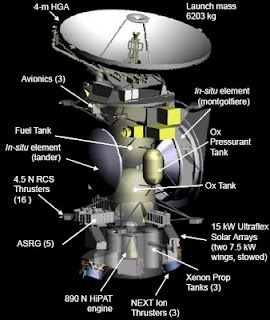 The full TSSM mission stack including the orbiter, Titan montgolfière and lake lander, and solar electric propulsion stage to shorten the flight to Saturn. From http://www.lpi.usra.edu/opag/nov2008Meeting/presentations/TSSM3.pdf
In my previous entry on this mission, I talked about how focused the orbiter's instrument set are on exploring Titan itself. Many flagship missions (for example the Cassini Saturn orbiter) attempt to cover a breadth of science at their destinations. This mission is carefully focused on Titan. Every instrument appears to have been justified in terms of extending our knowledge of that moon.

On the other hand, the orbiter will spend 24 months in orbit around Saturn prior to Titan orbit insertion. What science can it conduct along the journey?

The principle target will be the tiny moon Enceladus with seven flybys. Since the discovery of its active geysers and increasing hints that they may originate in a subterrainean ocean, this moon has been a target for a follow on mission. While the TSSM orbiter's instruments will be selected for Titan science, it is fortuitous that they will also provide excellent science at this moon. Several key goals are forseen:

- High resolution imaging of the moon for both mapping and spectrometry to determine surface composition
- Probing the interior of the moon down to 50 km depth with an ice penetrating radar and measuring the internal structure through analysis of the gravity field
- Directly sampling the material in the geysers with a mass spectrometer that can determine the composition of molecules, including organic molecules, that are much heavier and more complext in their composition than the instruments on Cassini could

Each flyby of Enceladus will produce approximately 15Gbits of data. If all goes according to plan, we may learn whether Enceladus has an internal ocean laced with complex organic molecules that could suggest pre-biotic chemistry or even life. Among the goals of the flybys is to identify potential landing sites for a follow on mission.

In addition to flybys of Enceladus, the orbiter will fly close to Saturn's rings during its orbit insertion about that giant planet. It will come three to four times closer than Cassini to the B and C rings and seven times closer to the A ring. In addition, while Cassini passed by the rings on their unlit side, the TSSM orbiter will pass over them on the sunlit side. This will provide new opportunities to take images and perform spectrometry of the rings at resolutions better than Cassini.

For Saturn itself, the TSSM orbiter's instruments can see further into the infrared than Cassini, allowing the cameras to study atmospheric phenomena deeper than those Cassini could see. It is also possible that the orbiter may perform a small number of close flybys of other small moons in the Saturn system. If this occurs, then the ice penetrating radar would provide our first internal probes of those worlds, along with new imaging and spectral measurements of their surface.

The orbiter will also perform 16 Titan flybys before entering orbit around that world with eight at altitudes of 720 to 1240 km. Priority will be given to remote imaging and spectral measurements of the atmosphere and surface along with in situ sampling the atmosphere's tenous upper atmosphere and fields and particles. One instrument that won't be used will be the surface penetrating radar. There is concern that this instrument's deployed 10 m antenna could cause problems during later aerobraking at Titan. So that this doesn't occur, one set of antennas will be used at Enceladus and then jestissoned with the second set deployed after achieving final Titan orbit. No deployed antenna will be available for the low Titan flybys.

The planning documents unfortunately do not give details on how much of Titan will be imaged and at what resolutions during the flybys. However, a total of ~26Gbits of data would be collected. 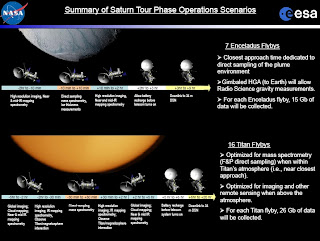 Examples of flyby science for Enceladus and Titan. Click on image for larger version. From http://www.lpi.usra.edu/opag/nov2008Meeting/presentations/TSSM3.pdf
The information provided on the Titan flybys gives hints for an alternative mission to Titan if the Titan flagship mission is not selected. NASA's scientific advisory boards have given high priority to Io and Ganymede observer missions that would study those targets during a series of flybys during an orbital tour of Jupiter. The science returned by either observer would be much less than that provided by a dedicated orbiter such as the Europa or Ganymede orbiters in the competing flagship proposal. However, if repeated flybys of those moons would be scientifically valuable, then why not for Titan? Yes, the science returned would be far less than from the TSSM orbiter. If it's flybys or nothing, though, a Titan observer may receive sufficient priority to be the next mission to this moon. The TSSM orbiter would perform 16 flybys, but the number of flybys could be much greater for an observer mission. And one could hope that a design could be found that would allow for deployed antennas during the flybys for an ice penetrating radar on such a mission. It is possible that another space agency could launch one or more balloons or landers to Titan timed to arrive when the Titan observer could act as a data relay.

One major issue for a Titan oberserver is that missions to Saturn cost more than to Jupiter -- it takes longer to reach and return the same amount of data from Saturn as Titan requires a heftier communications system and power system. A study of an equivalent Enceladus or Titan observer found that the cost would be $1.5-2B (FY 06 dollars) versus a potential cost of $650M + launcher (accounted for separately) an Io or Ganymede observer. With a $2.5B* (FY 07 dollars) cost for the TSSM orbiter, it may not be worthwhile to mount a Titan observer. On the other hand, if it is an observer or nothing to Titan for the next 20 years, one can hope that clever solutions in the $1-1.5B range might be developed. Several Mars missions in that price range are under discussion for the coming decade, so that scale of mission might be possible. Perhaps the observer is a pipe dream, but I for one will hold out hope should the TSSM mission not be selected. (And I will hold out hope for a Jovian icy moons observer if the Europa Jupiter flagship mission is not selected.)

*The $3.7B figure quoted for the TSSM orbiter mission is in real year, i.e., inflated, dollars