Planetary Missions Up For Review

You may never have heard of the upcoming NASA Senior Review, but it may have as big an impact on planetary exploration in the coming decade as any mission selection except possibly the approval of a Flagship mission to Mars or Europa.

First, though, some background.  When a mission is first approved, its budget includes funds for operating the spacecraft in flight and initial analysis of the scientific data.  The period of flight covered by this budget is known as the prime mission.  Once the spacecraft completes the prime mission, there's usually years of life left in it to go to new targets (such as the flights of the Deep Impact and Stardust spacecraft to second comets) or to continue collecting science at the prime target (such as the rover Opportunity at Mars or Cassini at Saturn).  These mission continuations are called extended missions.

NASA has to budget substantial funds to operate its many planetary and other science missions in their extended missions.  Generally the costs of these extended missions aren't well publicized (likely because NASA and the press reasonably assume few people in the public care).  However, we know that the Cassini mission in its current extended mission costs about $60M per year (probably near the high end) and the EPOXI (formerly the Deep Impact) mission costs about $5M per year (probably near the low end).  Cassini could operate through 2017, so the rest of its extended mission will cost ~$300M (assuming flat budgets).  The EPOXI mission will cost around $45M if its fuel holds out for a 2020 asteroid flyby.  Compare these costs to the $425M dollar cost of a new Discovery mission.

Then consider the list of missions that are in or will enter extended missions in the next two years:

Early in 2012, a series of Senior Reviews will be held that appears to cover all NASA's planetary, astrophysics, and heliophysics missions that are in or will enter extended missions by 2014.  (I don't know if the Earth science missions will be included in this senior review.)  As backdrop to this review, remember that each of these divisions are projected to face flat or declining budgets in the next several years.  In addition, NASA will need to find funds in its declining budget from these programs to help fund the completion of the James Webb Space Telescope, the over budget successor to the Hubble Space Telescope.

The review panels have a tough job.  Each of these missions continue to gather data for which there will not be a chance to gather again for many years or even decades.  How do you rank, for example, the science that will be enabled by the next 1%* of Mars imaged at 0.3 m resolution by the Mars Reconnaissance Orbiter against the next 40+ planned Titan flybys by the Cassini spacecraft?  (*In it's first four years of operation, the MRO's HiRISE camera imaged about 1% of Mars at this resolution.)

In my next post, I'll look at what is at stake for one extended mission, the Cassini mission at Saturn. 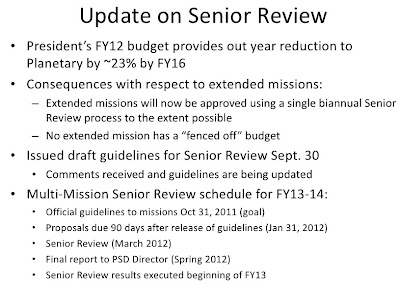 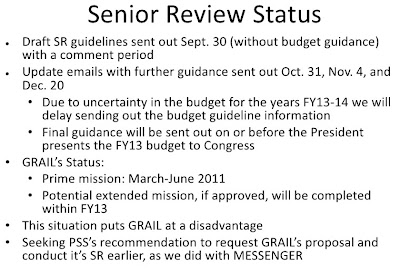 My Google searches failed to find the website for the Planetary Science Division's Senior Review.  (Either poor searching, or it's posting may have been delayed because the planetary budget appears to be in particular flux.)  If you are interested, however, you can read the guidance for the Astrophysics programs' Senior Review along with results from past reviews.

Each extended mission team has to write a proposal to support its request for continued funding.  The call for proposals includes this description of the process for the reviews:


In the following descriptions, “project” denotes a full mission or project in the traditional sense or U.S. participation on a mission led by an international partner. NASA HQ will instruct the Senior Review panel to:


(1) Rank the scientific merit of each project on a “science per dollar” basis (based upon expected returns during 2013 and 2014) in the context of science goals, objectives and research focus areas described in the SMD Science and Strategic Plans.
(2) Assess the cost efficiency, technology development and dissemination, data collection, archiving and distribution, and education/outreach as secondary evaluation criteria, after science merit/usefulness.


(3) Based on (1) through (2), provide findings to assist with an implementation strategy for Astrophysics Division missions in extended operations for 2013 and 2014, including an appropriate mix of:

Titan on the Installment Plan 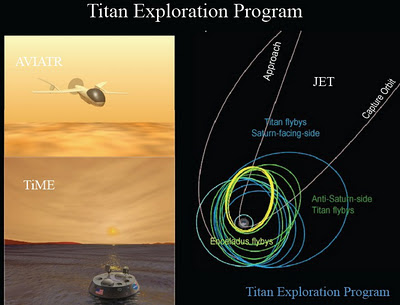