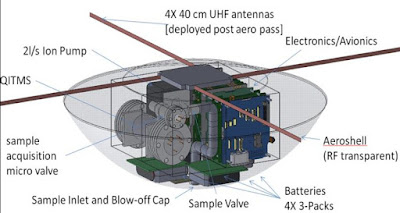 
The last two weeks have seen a number of articles and press releases on future planetary exploration.  The big news was that NASA’s managers are proposing a fast track Mars sample return mission for the mid-2020s.  Numerous articles were written; I’ve listed several that I thought were among the best I saw.

You might also want to check out Leonard David’s story, Beating Curiosity, on the technical enhancements that will enable the Mars 2020 rover mission.

For fans of Titan exploration, there’s now a website for the proposed Dragonfly rotocraft and an article on the proposed Oceanus orbiter.

Several other articles discuss other plans and proposals to explore the planets.

A future comes into focus for the Mars Exploration Program

NASA's Next Mars Mission to Investigate Interior of Red Planet

Proposed Orbiter Could Probe the Ocean Beneath Saturn's Moon Titan

A clockwork rover for Venus

Rounding out the field

CubeSats: faster and cheaper, but are they better?