It’s clear that the President’s budget officers really don’t want to fund a mission to Europa.  Other than that, the proposed Fiscal Year 2017 budget submitted by the President last week to Congress would be great for planetary exploration.

The submission of the Fiscal Year 2017 proposed budget is just the opening move in getting to what will be NASA’s actual budget for next year.  The proposal itself is the result of negotiations between the budget managers in the President’s Office of Budget Management and the space agency’s senior managers.  Most of the proposed NASA budget is a simple continuation of the 2016 budget.  In the few areas like Europa where the administration and Congress differ on policy, though, there are significant changes from this year’s budget.  In the next step in the process, committees in the House of Representatives and the Senate will make changes to portions of the budget to reflect their priorities and then will negotiate their differences.  Eventually a spending bill will be passed and signed by the President.

Excepting Europa (more on this later), there’s a lot to like in the proposed planetary budget.  Following successive years of cuts early in the decade and a gradual series of increases to rebuild the program, the top number for the FY17 planetary program is proposed to be $1.52 billion.  With the proposed cut to the Europa mission studies, this number is down by $110 million from this year’s FY16 budget.

With the proposed budget, we should see a number of new planetary missions launch in in the 2020s starting the launch of the ~$2.2 billion Mars 2020 rover.

If the funding levels suggested for the beginning of the 2020s were continued through the next decade, then NASA should be able to launch several low-cost (~$450 million) Discovery missions.  The budget proposal specifically talks about the desire to select two missions from the Discovery competition in progress to launch in 2021 and 2023.  The head of the Planetary Science Division, Jim Green, has said he’d like to hold competitions approximately every four years and select two missions from each competition, resulting in a new mission approximately every two years.  That would support the launch of around five Discovery missions in the 2020’s.

The budget supports the launch of a mid-cost (~$850 million) dollar New Frontiers mission in the mid-2020s.   Dr. Green has said that he and his managers are planning for launches approximately every five years going forward, meaning that we should see two missions fly in the 2020’s.

The budget would also fully fund NASA’s contributions to the European Space Agency’s 2016 ExoMars Trace Gas Orbiter, 2018 ExoMars rover, and the JUICE Jupiter system mission that will arrive in the late 2020’s.

NASA has also talked about a new orbiter for Mars for the early 2020’s, although the budget is silent on funding for this mission.

And then there’s the Europa multi-flyby (previously called the Europa Clipper) mission.  While previous Presidential budget proposals have called for this mission to launch in the mid to late 2020’s, this budget proposal seems to call for a possible delay in that vague schedule by suggesting a “launch as early as the late 2020s”.  The proposal ignores language in the FY16 budget law (which governs spending only for this year) inserted by Congress directing NASA to launch the mission by 2022 (and that also directed NASA to add a lander to the mission, which also is ignored in this new budget proposal).

The stark difference between what the President’s budget proposes and what would be needed to launch the Europa mission in 2022 is shown by the numbers in the following table (both sets of numbers are provided in the budget proposal document).

Under the President’s proposal, $493 million would be spent on the Europa mission through 2021 versus the $2.1 billion needed to keep the mission on track to launch in 2022.

In political terms, pushing the mission’s launch out a dozen or more years may be the equivalent of postponing it forever.  For the mission to fly, it would need continuous support from at least two more Presidential administrations and as many as six to eight new Congresses.  It’s hard to imagine any mission sustaining support for that long.  It’s also hard to imagine how NASA could keep a high caliber engineering and science team together for what might be fourteen or more years (with a possible six or seven additional years of flight following launch to arrive at Europa).  On a very practical engineering level, many of the technologies available to design into a mission today will be obsolete and no longer available by the late 2020s.  The mission design would need to be continuously tweaked to substitute new technologies.

Why might the President’s budget officials be opposed to the Europa mission?  The explanation given in the proposal document is that launching a Europa mission before the late 2020’s would lead to an unbalanced planetary program that would not support the program laid out in the last Decadal Survey.  This statement assumes that the cap on the total planetary budget would remain fixed at around the $1.5 billion proposed for this year.

Here are the possible explanations I’ve been able to think of for the Administration’s lack of support for the Europa mission (the first two are consistent with the explanation in the budget document):

Delaying the Europa mission prevents a bulge in spending requirements.  For the rest of this decade, NASA’s new mission spending is dominated by the expensive Mars 2020 rover.  The budget proposal also shows sharp budget increases late in the decade for the Discovery and New Frontiers programs.  Launching the Europa mission by 2022 as mandated by Congress would require either greatly increasing overall planetary funding or cannibalizing other programs.  (Note: I would like to see a much larger planetary budget.)

The budget officials (and perhaps NASA’s senior managers) prefer cheaper Discovery and New Frontiers missions to the Flagship Europa mission.  Experience has shown that large Flagship mission are more likely to have large cost overruns that play havoc with NASA’s budget.  Countering this, the generous money that Congress has provided the mission so far as matured the design much more than is typical at this stage of development.  That maturity makes cost overruns less likely.

Europa isn’t Mars, and studying and eventually getting humans to Mars is NASA’s current overriding goal.

Pure politics.  Several of the Congressional leaders who are strongly backing the Europa mission and planetary exploration in general are highly conservative politically.  While they favor spending more money on planetary missions, they also want to cut funding for missions for NASA to study the Earth, especially climate change.  Essentially proposing to push out the launch of a Europa mission to forever may be part of a hardball negotiating tactic to trade more funding for the Europa mission for also fully funding the President’s generous proposed budget for Earth science missions.

At the moment, we are left with the Europa mission as a formally approved mission on NASA’s books with an engineering and science team, a selected suite of instruments, and no target launch date.  The interesting politics will be whether or not Congress forces the addition of the many hundreds of millions of dollars into NASA’s planetary budget over the next several years needed to launch as early as 2022 without cannibalizing other planetary programs.  (For more on this, see this previous blog post.)

The Europa mission isn’t the only areas in which the Administration and Congress disagree on NASA budget and policy.  While outside the scope of this blog post, they also disagree on the amount that should be spent on Earth science (as noted above), developing commercial launch capabilities, and developing the Orion and Space Launch System programs.

Outside of these areas, though, there is a consensus on spending levels, and the final budget is likely to be similar to the proposed budget.

SpacePolicyOnline has a very good summary of the overall NASA budget and areas where the Administration and Congress are likely to disagree.  For the planetary program, Casey Dreier at the Planetary Society has good commentary on the proposed planetary budget.

Each budget proposal comes in two parts.  The first proposes spending for the next fiscal year (FY17 in this case) and is the starting point for the eventual law allocating funding for the next year.  The second part projects notional funding for four additional years (FY18 to FY21 in this case).  These notional budgets are not acted on by Congress, but provide agencies with guidance for future years.  For agencies like NASA whose projects typically take several years to implement, these notional budgets take on particular importance.  The agency cannot issue multi-year contracts that are inconsistent with the notional out year budgets.  These creates a problem if, for example, Congress provides generous funding for the Europa mission next year but the notional budgets are inconsistent with the necessary multi-year contracts.

The numbers for the following charts come from NASA’s budget documents except as noted. 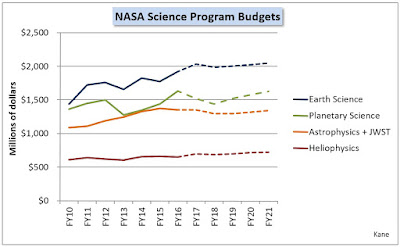 The FY17 budget proposal projects a onetime significant increase in the Earth Science budget to pull in development of the next Landsat Earth observing satellite.  The dip in planetary science funding comes primarily from proposed reductions in funding for the Europa mission.  Otherwise, the budget proposal shows relatively flat projected budgets for NASA’s science budgets. 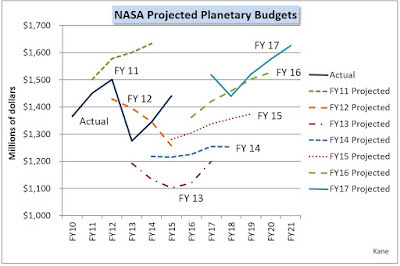 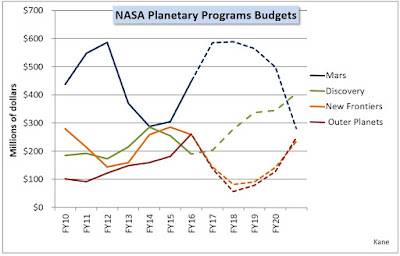 Within NASA’s planetary program, the budgets that fund current and future missions show projected shifts in future years as development of the Mars 2020 rover mission nears completion.  Funding shifts to the low-cost (~$450M per mission) Discovery program, the mid-cost (~$850M per mission) New Frontiers program, and the outer planets program, which includes the Europa mission.   Final funding levels at this level of detail haven’t been set for FY16, and I show estimates in this chart and the next from Casey Dreier and Jason Davis with The Planetary Society. 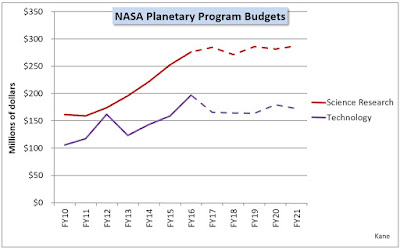 NASA’s planetary budget also includes two essential programs that funds scientists to analyze the data returned by NASA’s planetary missions and to develop technology for future missions.  The latter is proposed to take a one-time hit to reflect a cut in spending to develop technology for future Europa missions.  Otherwise, both programs are projected to have approximately flat funding for the remainder of this decade.