There's been little news to report lately, hence the lack of posts.

NASA's budget for FY2012 (which starts October 1) continues to wind it's way through Congress.  The committees responsible for NASA's budget in the House and Senate both have completed their recommended budgets.  They have recommended funding at $1.5B, just $40M less than the President's request.  While the House committee recommended cancelling the James Webb Space Telescope (JWST), the Senate recommended a substantial increase in this program's budget (with the increase coming from other parts of NASA's budget than the planetary program).

These actions are good leading indicators for the planetary program.  However, this is likely to be an unusual budget year.  Current law requires substantial cuts to the federal budget that will be either automatic across the board cuts or will follow the recommendations of a super committee that will attempt to draft recommendations for targeted cuts.  Any cuts to the planetary program would likely be applied to future mission planning and development (which is why I follow the budget in this blog -- budget politics certainly are not where my interests lie!).

I will be traveling the next few weeks, so future posts may be erratic for a bit.  However, I may finally find time on airplanes to write a couple of posts I've been wanting to write.
No comments:

As I'm sure most readers of this blog know, NASA's James Webb Space Telescope (JWST) -- the successor to the Hubble Telescope -- is seriously over budget.  The latest estimate puts the cost to complete the telescope at $8B, with only $3.5B of that already spent.  Based on the budget proposed for JWST for next year, it would take almost a decade to complete development.  (You may see a JWST budget estimate of $8.7B, which includes $0.7B to operate the telescope after launch.)

NASA has proposed to the White House (specifically, the Office of Management and Budget) that it 'tax' it's other programs, both science and manned spaceflight, to increase the budget for JWST and launch it around 2018.  There's no news, so far as I know, publicly available about the White House's reaction.  The House of Representatives voted to kill JWST.

A number of leading planetary scientists have just published a strongly worded editorial stating, "We individually and together reject the premise that JWST must be restored at all costs... Without additional funds to NASA, JWST should not be restored unless and until an open science community assessment is made of the value of what will be gained and what will be lost across the entire NASA science portfolio."

A less strongly worded letter from Dr. David Alexander, Chair, American Astronomical Society, Solar Physics Division (SPD), echoes some of the same concerns, "The SPD fully supports the science goals of the JWST and the priorities of our colleagues in astronomy and astrophysics; however, it is extremely worrisome that the proposed solution to the problem will further reduce the ability of the other divisions within the NASA Science Mission Directorate to accomplish their own nationally sanctioned scientific programs."

The journal Nature's News Blog has some additional analysis of these letters and their motivation.

Editorial Thoughts: The problems in JWST's funding comes at the same time as NASA's manned spaceflight program faces it's own budget challenges.  The programs on NASA's plate simply appear to be more expensive than it's current budget can pay for.  I don't know what the least wrong solution is, but the following thoughts may suggest how difficult the choices may be.

JWST promises to continue Hubble's revolution in the understanding of the universe.  Here's a list of the JWST program's major science programs, copied from the its website:


What might be lost from the planetary program if it's budget is cut?  The planetary Decadal Survey prioritized its programs as:


If NASA were to cut starting the planetary program starting with the lowest priority, it would appear that the 2018 rover would be the first to be cut.  That mission would place a second rover (after the soon to be launched Mars Science Laboratory) with a highly capable analytical laboratory on Mars.  The mission also would collect and cache samples for possible return to Earth.

JWST and the 2018 Mars rover both would be great missions.  How would you make the decision?  If you are an American citizen, you might want to share your choice with your senators and congressman.
No comments: 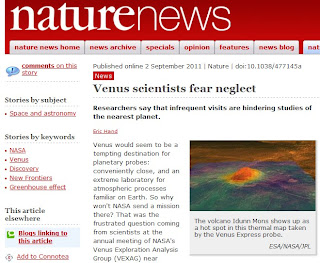 For the last several years, I've followed every meeting of the several Analysis Groups that provide NASA with feedback on it's planetary exploration plans.  There's a group for Mars (MEPAG), the outer planets (OPAG), small bodies (SBAG), and Venus (VEXAG).   When there's no major issues in the area of focus, the meetings can be status updates that might provide tidbits of news.  When there's a hot issue, the meetings can provide first looks at those issues with meaty presentations.

The just completed VEXAG meeting had a focus I'd not seen before, that appeared to be asking NASA to explain the lack of missions planned for Venus:


These presentations haven't been posted yet, but the journal Nature has provided a summary of the concerns behind asking NASA to discuss these topics.  According to the article, the Venus science community perceives, "an agency bias against Venus, a planet that hasn't seen a US mission since the Magellan probe radar-mapped its shrouded surface in the early 1990s, and which won't see one any time soon, after NASA this year rejected a bumper crop of Venus proposals."

The community has tried to get a mission prioritized by describing why Venus is worthy of exploration and listing priority investigations (for example, Venus Exploration Goals and Objectives).  The SAGE Venus lander was proposed for the last New Frontiers competition, but was passed over and the OSIRIS-REx asteroid sample return mission was selected.

According to Nature, a quarter of the 28 Discovery proposals for the latest competition targeted Venus, but not one was selected as a finalist.  Six of those received the lowest ranking, and only one that focused on atmospheric studies was judged competitive.

Nature reports that NASA's explanation for the low rankings is that, "Venus scientists need a clearer consensus on their goals and the measurements that they want to make."  In the meantime, that community is seeing interest in Venus shrink among the larger planetary community as missions focus on other solar system targets.

Editorial Thoughts:  I know from personal experience how tough proposal reviews are.  The ones that hurt are those where the proposing team had a technical error (they should have caught those).  Proposals for spacecraft missions also have to demonstrate that they can be developed with the program's mission cost cap.  The Nature article doesn't mention any proposals rejected for technical or cost issues, but some may have been.

Usually, the bigger hurdle for proposers is developing a compelling scientific question to address.  It's not enough to, for example, say that you will map x% of Venus' surface at 10x higher resolution than has been done before.  You have to show what compelling question(s) will be answered.   And your compelling questions have to be better than your competition's questions.

Given the low ranking for six of the Venus Discovery proposals, it appears that either the Venus community hasn't sharpened its priorities and questions sufficiently, or the best questions available for Venus that can be addressed within a Discovery budget aren't compelling compared to those for other solar system targets.  It may be that previous missions have picked off the inexpensive low hanging fruit.

The European Venus science community has also proposed Venus missions to follow up on the Venus Express mission, but so far have had no luck.  The Russians are defining a new mission, Venera-D, that would include a lander and possibly also an orbiter and balloon platforms.  (I'm not sure that this is a formally approved mission or not.  I'd appreciate it if any readers with a better understanding of this mission's status could leave a comment.)  See this previous post on the European and Russian proposals: http://futureplanets.blogspot.com/2010/01/russian-and-european-venus-ambitions.html

Bonus: NASA generally doesn't reveal too much information on the Discovery mission proposals.   The Nature article, though, gives the number of proposals by target for the competition in progress:

The selected finalists were the Titan Mare Explorer (TiME), the GEMS Mars geophysical station, and the Comet Hopper.