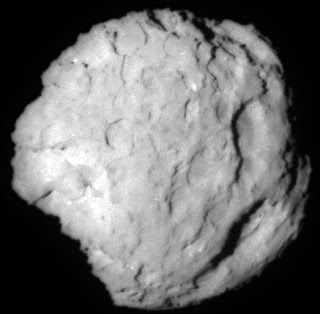 Comet Wild 2
Comets and asteroids have been an on-going priority for planetary exploration for some time because of the clues they hold for the formation of the solar system. A number of missions have flown past or orbited these worlds and returned dust samples from a comet. Two sophisticated missions are on their way to rendezvous and land on a comet nucleus (Rosetta) and orbit two of the three largest asteroids (Dawn). In addition, two spacecraft are on their way to fly past comets. The Japanese Hayabusa craft is returning to Earth and may bring with it samples from a comet. The Russians are preparing their Phobos-Grunt spacecraft to return samples from that small moonlet of Mars.

So, what is next for the exploration of these small bodies? NASA's advisory boards set mission priorities only for the largest mission classes. (The smallest class missions in the Discovery program are selected from proposals submitted for each competition without prior prioritization of missions.) There are no plans that I am aware of for a large mission ($1-3B range). For the medium mission class, the scientific community has included three small bodies missions in its list of eight mission priorities:

An asteroid sample return mission to provide samples of primative materials that likely have not survived entry into the Earth's atmosphere to be included in our collection of meteors. (The Marco Polo mission to return samples from an asteroid is in competition for selection ESA's next medium class (300 euro) and would be implemented jointly with the Japanese space agency (JAXA). ) 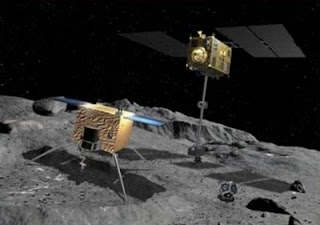 Marco Polo Mission
The multitude of missions to these bodies in the past and in flight raises the bar for future missions. Simple flybys seem unlikely (unless to a very distant object such a Centaur or en route to another destination). Simply orbiting or rendezvousing with a body also seems to be a repeat of past missions and hence would seem unlikely to receive funding. (As a scientist, I like repeating measurements in different places because that allows us to learn about the processes that create similarity and variance. However, doing this with multi-hundred dollar (or euro or rubble or equivalent in your favorite currency) doesn't seem to get your proposal funded.)

While the bar has been raised, there doesn't seem to be any shortage of ideas for future missions to small bodies. The concepts that I have seen discussed include:

Small missions (Discovery class). Proposals and concepts here include missions that would orbit and then land on small bodies (often with several landings). Examples include the Ilion mission to a Trojan asteroid and the CHopper comet redezvous/lander craft. The Deep Interior mission would not land on a comet but would instead orbit it and image its interior in high resolution with surface penetrating radar. A proposal to return samples from several near Earth asteroids was a finalist for the last Discovery selection. Why it wasn't selected isn't known: possible reasons include technical issues, cost concerns, potential science return, or something else. There is also a Discovery mission concept in the works that would collect dust samples at low velocity while flying in formation with a comet and then returning the samples to Earth.

Piecing together hints from various places, it appears that craft that orbit and then land on small bodies could fit within a Discovery budget. A key issue for Discovery class missions is affording a large set of instruments. If you have a craft that observes the body at a distance and on the surface, generally two sets of instruments would seem to be needed. For an asteroid with a rocky surface, one could imagine that the surface instruments could consist of a simple camera, a contact spectrometer for composition, and a robotic arm to place the spectrometer. For a body with significant organics, however, the instrument list for the landing phase becomes more extensive. The proposed instrument list for CHopper, "In addition to high resolution imaging and multi-spectral mappers, the in situ scientific payload instruments under consideration include a dust flux monitor, organic analyzer, elemental analyzer, microscopic imager, and gas mass spectrometer," bears out this argument. As few as two remote sensing instruments and four surface instruments (with the dust flux monitor probably working in both modes). In this case, it might be better to think of the craft as a lander that can also carry out some remote sensing.
Medium missions (New Frontiers class). Several studies have suggested that a surface sample could be collected and returned from an asteroid or comet within the budget of a New Frontiers mission (see, for example http://futureplanets.blogspot.com/2009/02/asteroid-sample-return-missions.html and links within that blog post). The Marco Polo mission, once the ESA and JAXA contributions are added together, appears to be in this price range. With sample return missions, we would be get some remote sensing of a body from orbit or rendezvous (the instrument list would probably be short to afford the sample return equipment) and actual samples for detailed analysis in Earth labs.

In general, near Earth asteroids probably would most easily fit within this price range. A study of a comet sample return mission suggested that such a mission might fall into the price range, but with a lot of cavaets (more on that in a moment) See http://www.lpi.usra.edu/opag/nov_2007_meeting/presentations/cssr.pdf for the mission analysis and http://www.lpi.usra.edu/opag/nov_2007_meeting/presentations/cssr_science.pdf for the science rational and goals.
Large missions (Flagship). Comets pose a particular challenge for sample return because the desired material to return includes solids (dust, pebbles, etc.) and ices (especially important because we don't have volatile samples from the formation of the solar system). Comet sample return requires that the sample be kept frozen both to preserve water ice (and other ices ideally, but that requires even colder temperatures) and to prevent melting water from chemically altering the solid sample. This cooling requirement apparently pushes comet sample return missions out of the New Frontiers budget at closer to $1B. (See slide 11 in this presentation for a discussion of the budget dilemna: http://www.lpi.usra.edu/sbag/meetings/jan2009/presentations/AHearn_SBAG-EPOXI.pdf). NASA's advisory committees have said that a proposal to return non-cooled samples should be allowed to be submitted for the New Frontiers competitions, but that the proposer will have to justify why the mission can still fulfill the science goals with a warm sample. That sounds like a potential deal breaker that would move comet sample return missions into the large mission class.

My take on all this is that we can expect to continue to see proposals for small body missions in the Discovery program with missions moving to more ambitious goals of landing or carrying out other new types of measurements. I would be surprised if there isn't a proposal for an asteroid sample return mission in the current New Frontiers competition (although we generally learn only of the finalists, not of the proposals that didn't get that far). However, the holy grail of small bodies missions for some time has been to return a large sample from the surface of a comet. It appears that that mission may not fly unless the Decadal Survey in progress makes that mission a high priority for selection as a large mission in the next decade.