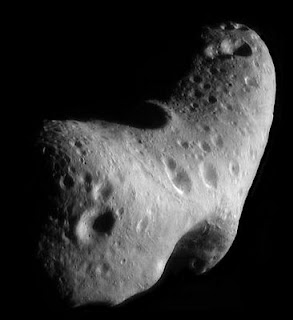 The Near Earth Asteroid Eros from the NEAR spacecraft.
Along with the selection of the next outer planets Flagship mission, a reoccurring theme of this blog has been candidate missions for the next New Frontiers ($650M not including launcher) mission. (For a list of candidate targets see the poll at the top of the right column.) This entry will deal with the asteroid sample return mission. The science community laid out the case for an asteroid sample return (click here to download the original report; these paragraphs are copied from the text on p. 38 and following):

The primary motivations for an asteroid sample return mission is the desire to both acquire samples with known geologic context and to return materials that are either unlikely to survive passage to Earth (e.g., friable, volatile-rich material) or would be compromised by terrestrial contamination upon their fall (e.g., extraterrestrial organics)...

In the past several years a number of developments have strengthened the case for asteroid sample return. The most important of these is the complete analyses of the data on 433 Eros (Figure 2.8) returned from the NEAR mission and the successful encounter of the Japanese Hayabusa spacecraft with asteroid Itokawa. These encounters demonstrated the diversity of asteroids and their complexity both internally and on the surface. The recognition of the diversity of organics in meteorite samples has prompted a re-evaluation of the astrobiological importance of asteroids.48 A sample return from an organic-rich asteroid may offer insights into the distribution of biogenic compounds and allow an evaluation of whether the delivery of precursor exogenous materials might have contributed to the origin of life...

The decadal survey emphasized the value of a return to asteroid 433 Eros, which has already been the subject of global characterization during the Near Earth Asteroid Rendezvous (NEAR) mission that ended in early 2001. The NEAR mission emphasized the complexity of asteroidal regolith and the need to understand surface processes if remotely sensed spectra of asteroids are to be interpreted...

The committee recommends that although the Asteroid Rover/Sample Return mission should be included as a candidate mission for the New Frontiers Program, the mission objectives should be changed to reflect new scientific information acquired since the decadal survey. Specifically, the unique scientific value of organic-rich targets may elevate them for consideration when compared to the type of asteroid visited by the NEAR mission emphasized by the decadal survey. Such a mission should have the following science objectives, which are not prioritized:

- Map the surface texture, spectral properties (e.g., color, albedo), and geochemistry of the surface of an asteroid at sufficient spatial resolution to resolve geologic features (e.g., craters, fractures, lithologic units) necessary to decipher the geologic history of the asteroid and provide context for returned samples.

- Document the regolith at the sampling site in situ with emphasis on, e.g., lateral and vertical textural, mineralogical, and geochemical heterogeneity at scales down to the submillimeter.

- Return a sample to Earth in an amount sufficient for molecular (or organic) and mineralogical analyses, including documentation of possible sources of contamination throughout the collection, return, and curation phases of the mission. 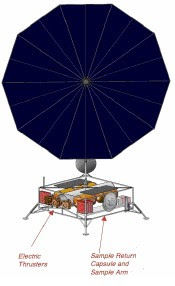 Conceptual asteroid sample return craft. The large circular object is the solar array. The small disk is the antenna.
What isn't clear from the report is whether near Earth asteroids are likely to have significant organic content. (I have no idea one way or another.) It may be that to acquire pristine organic samples that a sample return from a main belt asteroid would be needed. (If any of the readers of this blog know, please leave a comment.)

At the recent Small Bodies Assessment Group (SBAG), a NASA advisory board, advances in electric propulsion were presented. The presentation included a short summary of a possible mission to return sample from two near Earth asteroids. The key slides are reproduced below. (Click on the image for larger versions or go here for the original presentation.) It appears from the presentation that this class of mission could fit into the New Frontiers budget. There's no data on whether or not a main belt asteroid sample return would, but (editorial comment) I have my doubts. The main belt is further away and the temptation to sample a larger asteroid with a bigger gravity field may bump that mission out of the New Frontiers class. 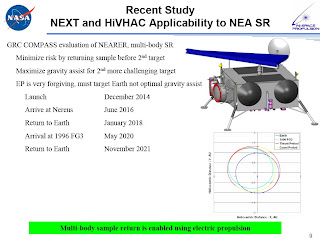 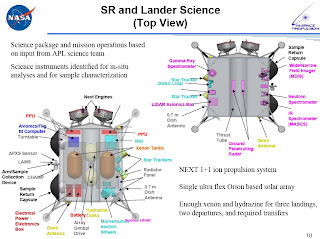