The Obama administration has presented a summary of what will be its Fiscal Year 2010 budget. The news for NASA overall is good. The FY10 proposal will be $1.4B greater than the FY08 actual and $900M more than the FY09 proposed budget. In addition, the stimulas package provides an additional $1B, with most of those funds targetted to new Earth observation missions (my bread and butter) and to exploration, which I believes means manned exploration.

The FY10 summary is sparse on details -- the entire paragraph dealing with robotic exploration appears below. The key news is that if Congress approves the budget, then NASA will have some significant new funding. We will have to wait until this spring to see how much goes to the planetary program. My guess is that the majority of the increase will go to Earth observations and building the craft for the next generation of manned flights. However, the increased money decreases pressure on NASA to pull money from the science programs to fund the manned program. My guess is that the best the planetary program will get may be some extra money to help pay for the Mars Science Laboratory cost overruns. NASA already has a number of planetary programs in flight or underway. Just keeping those on track will, in my opinion, be good news. However, the Obama administration is welcome to delight me by proving me wrong with a significant increase to the planetary program. :>

From the two page budget summary:

[The proposed FY10 budget]
Funds a Robust Program of Space Exploration
involving humans and Robots.
NASA’s astronauts and robotic spacecraft have
been exploring our solar system and the universe
for more than 50 years. The Agency will
create a new chapter of this legacy as it works to
return Americans to the Moon by 2020 as part
of a robust human and robotic space exploration
program. NASA also will send a broad suite of
robotic missions to destinations throughout the
solar system and develop a bold new set of astronomical
observatories to probe the mysteries of
the universe, increasing investment in research,
data analysis, and technology development in
support of these goals.
For those of you not familiar with the U.S budgeting process, here's a brief overview. The President proposes a budget for the next fiscal year (which starts Oct 1), usually in February. When there is a new administration, the details usually come in the spring. The two houses of Congress, the House of Representatives and the Senate, each pass their own version of the budget which can differ by several hundred million for NASA's science program. The two houses plus the White House then dicker on the details and pass a final budget which then must be approved and signed by the President. The final FY10 budget is unlikely much before October and may well come sometime after that.

In the past few years, Congress and the White House have not been able to agree on a budget, and NASA (along with most other branches of the U.S. government) have been funded at approximately the previous year's level. This effectively is a cut in funding since inflation will reduce purchasing power. Budget increases for NASA will be welcome, indeed. 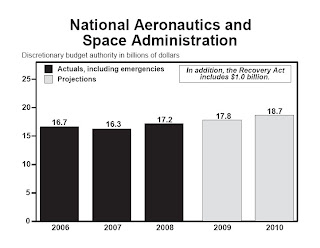