I came across a great website today called Robot Explorers run by David Portree, who is a "space archive manager, a planetary map librarian, a science writer, a historian, an outreach educator, a widower, a single dad, and a geek." He looks through old mission proposals (most of them for planetary exploration) and provides very lucid summaries. Many of the ideas for missions that never were simply are fun to think about:

One of my favorites, the Saturn Ring Observer would have a craft hover over the rings for detailed observations. Several methods have been proposed to bring the craft into orbit around Saturn at a distance where the craft is just a kilometer or two above the rings. The craft's engines would fire every so often to keep it safely above the rings. From there, it would provide "to obtain close-in observations of centimeter-scale ring particle interactions"[emphasis added] to determine the mechanics of ring collisions. The results could give insights into how planets and moons formed from rings of material in the early solar system. 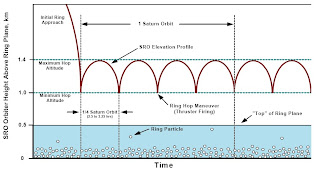 From A Conceptual Saturn Ring Observer Mission Using Standard Radioisotope Power Systems. Click on the image for a larger view.
You can read the full paper at:
http://trs-new.jpl.nasa.gov/dspace/bitstream/2014/37668/1/05-2221.pdf

To put this mission proposal into context, JPL has a small team that looks a decade or two out to envision possible planetary missions. They develop concepts for possible planetary missions and works out the engineering requirements and the new technologies that would be required. So far as I know, the Saturn Ring Observer is not on any space agency's mission roadmap. Several technologies (including aerocapture) probably would need to be developed.

Portree's website can also be thought of as a historical analysis. Regular readers of my blog may have noticed a degree of cynicism about the probability of a Mars Sample Return (MSR). Portree documents the history of proposals for this mission, none of which as ever been approved for flight, much less left the ground. These missions have been studied since I was in junior high. I have a feeling that they may still be being studied when my grandchildren (and my son is only 19 with no romantic interests he's told his parents about) are in junior high. This mission is technically tough (and maybe beyond our technology given current launch vehicles) and expensive. The cheapest recent guesstimate I've seen is ~$3B and the smart money seems to be on $5-6B.