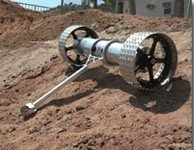 I'm not one given to finding things cute, but this concept definitely ranks as cute. And possibly quite useful for future planetary missions. It is the Axel Rover jointly developed by JPL and Caltech. It's basically a small cylinder with wheels attached. Cameras, electronics, batteries, etc. are housed inside the cylinder.

This rover won't replace the Mars Science Laboratory or ExoMars. However, it could operate as a nice axillary rover on a mission. As pictured below, it could go to places where a large rover couldn't. Or it could be an adjunct to a network lander. The main station would collect seismometry and weather data while the Axel rover explores the nearby rocks and soils. (Think of it as a round Soujourner.) 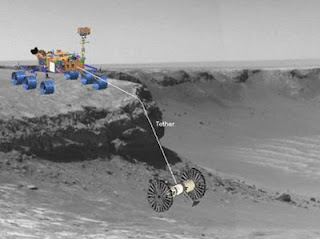 I can think of some key limitations (which means t he folks at JPL and Caltech have, too, and probably have better solutions than I'll give.) First, battery life would be limited, and it would seem hard to place a meaningful solar array on the cylinder. However, the tether could supply power from the main rover or lander to recharge the batteries. Second, I'd like a visual-near infrared point spectrometer. And third, I'd like a small second arm t hat would have a contact spectrometer such as an alpha-proton-x-ray spectrometer to measure composition. Just seeing close up pictures of rocks seems to me to be interesting; getting composition too would seem to be to be a dynamite combination. Don't know if you can cram that much in and still keep this rover small, but it's fun to daydream.

Here are some links for more information:

A general overview with discussion of applications (the pictures above are copied from this site)
http://www-robotics.jpl.nasa.gov/systems/system.cfm?System=16

Links to a paper and presentation
http://robotics.caltech.edu/~pablo/axel/publications.html