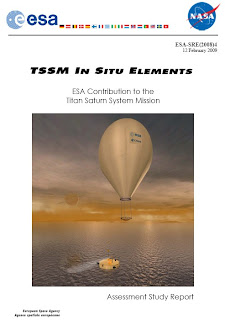 ESA has posted their Titan in-situ elements study assessment. This document has a wealth of detailed information on the two (and possibly three) craft that would enter Titan's atmosphere. The total package includes a balloon (termed by its French name, Montgolfière), an atmospheric probe that will land on the surface of lake, and possibly a long-lived lander (more on this later).

(Before I continue on possible Titan exploration, be sure to check out Jason Perry's description of the studies that would be performed of the thickness of Europa's ice shell by the competing Europa Jupiter mission.)

I suspect that most of the readers of this blog (and thanks to every one of the 1,390 of you who have visited since I figured out how to track this in early December) are most interested in planetary exploration for the excitement of the exploration. The Titan in-situ craft would, I believe, provide the most exciting exploration opportunity of the next twenty years. (Although the flyby of the Pluto system and future Mars rovers will be close contenders and may win out in some readers' opinion). Imagine the images captured from a Montgolfière of river beds, mountains, dune fields of a world that possesses many of the processes found on Earth -- just the deep freeze version. Think about the images captured by the lake lander as it floats gently (one hopes) on the waves of an alien see.

The day before the poll on this site closes, the Titan Saturn mission is out voting the Europa Jupiter mission by almost three to one. Given that the science is absolutely outstanding for both Flagship contenders, the landslide probably comes from the expected thrill of exploration that the in situ elements offer. 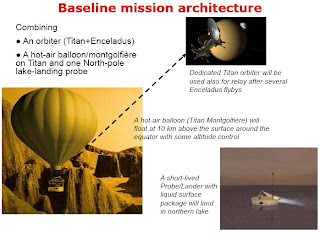 From http://www.lpi.usra.edu/opag/nov2008Meeting/presentations/TSSM2.pdf
However, space agencies don't fly multi-billion dollar/euro missions only to indulge the public's desire for exploration. There has to be solid science to be performed. The study assessment lists ten firsts that the Montgolfière and lake lander would perform. I can't improve on their writing, so I'll simply copy their list here and encourage you to go through the document for more detail:

"1. First direct in situ exploration of the northern seas of Titan—the only known surface seas in
the solar system beyond Earth.
2. Detailed images of thousands of kilometers of Titan terrain, with image quality comparable
to that of Huygens during its descent will test the extent of fluvial erosion on Titan at
Huygens spatial scales, well matched to the scales mapped globally by the orbiter.
3. First analysis of the detailed sedimentary record of organic deposits and crustal ice geology
on Titan, including the search for porous environments (“caverns measureless to man”)
hinted at by Cassini on Xanadu.
4. Direct test through in situ meteorological measurements of whether the large lakes and seas
control the global methane humidity—key to the methane cycle.
5. First in situ sampling of the winter polar environment on Titan—vastly different from the
equatorial atmosphere explored by Huygens.
6. Compositional mapping of the surface at scales sufficient to identify materials deposited by
fluvial, aeolian, tectonic, impact, and/or cryo-volcanic processes.
7. First search for a permanent magnetic field unimpeded by Titan's ionosphere.
8. First direct search for a subsurface water ocean suggested by Cassini.
9. First direct, prolonged exploration of Titan’s complex lower atmosphere winds.
10. Exploration of the complex organic chemistry in the lower atmosphere and surface liquid
reservoirs discovered at high latitudes by Cassini."

I'll close with some interesting facts I gleamed from going through the study:

The Montgolfière's ice penetrating radar will probe the surface to depths of a few hundred meters to approximately a kilometer. This will be deep enough to study near surface stratigraphy and search for subsurface bodies of liquids. It would not probe deeply enough to detect the large subterranean ocean believed to lie at some depth below the surface.

The lake lander will include a sonar to measure the depth of the lake (really, a small sea) beneath is splash point.

The study's engineers have figured out a way to potentially include a long lived lander (alas, no camera). There is some spare room and mass in the Montgolfière's entry system. By filling this space with a small radioisotopic power system, and a small (2.6 kg) package of instruments, long term (goal of > 150 days) studies of tidal distortion and rotational state, seismic, and variations in the magnetic field could be conducted. Following the deployment of the Montgolfière, the entry shield with the surface package attached would simply desend through the atmosphere to a soft landing. This lander has not been a thoroughly studied as the Montgolfière and lake lander and so isn't yet formally part of the proposal. It would be further studied if Titan is chosen as the destination for the next Flagship mission.