NASA's advisory board on Mars exploration, MEPAG, met on Tuesday and Wednesday of this week. The focus on Tuesday when I listened in to part of the discussion was on roadmap planning for NASA, ESA, and Japan. I'll pass along some highlights with links to the full presentations in this blog entry. Day two of the meeting looks to focus on summaries of other Mars related workshops and conferences. 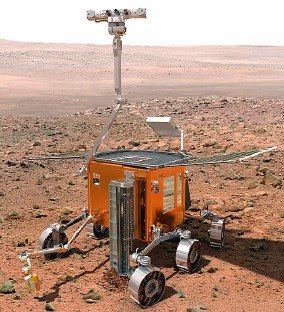 Concept for ESA's ExoMars Rover
A major theme of the roadmap discussions was discussing the possibility of international collaboration. The ESA update focused on ExoMars with some discussion of follow on missions. ExoMars will be a solar powered rover with a highly capable instrument suite focused on exobiology.

- ESA's member states have committed 850M euros towards the ExoMars rover, with another 150M euros to be paid for separately by member states. ESA believes it needs more like 1.2B euro (plus instruments) to execute the full mission. [The presentation says that NASA is planning to contribute up to $75M in instruments. I don't know if this is in addition to or part of the 150M euros.]

- ESA is looking for international cooperation with the U.S. and Russia to help close the funding gap. Even with this, ESA believes that the mission plan will have to be descoped.

- ESA is thinking of an on-going Mars program that would be a joint program with NASA in which ESA would contribute ~200-300M euro a year.

- ESA's presentation lists one scenario in which it would take the lead on the 2016 ExoMars rover, contribute to a NASA-led 2018 rover, and be part of a 2020 network mission. The long term goal is a joint Mars sample return mission. 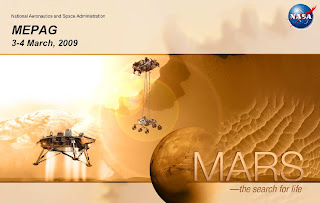 - His projected budget slide shows shows new mission development budgets of ~$300-400M per year for the first half of the next decade. That budget then ramps up considerably by the end of the decade to ~$900M with the assumption of a new start on a Mars sample return mission to begin in 2020. [This slide appears to be from a previous budget presentation to show previous expectations as a baseline for looking at a new roadmap. None of the other presentations in the meeting show MSR this early.]

- NASA has developed a series of guiding principles for its discussions with ESA on a joint Mars program. NASA wants to provide the entry, descent, and landing system for at least one mission in 2016 or 2018 to maintain its core competency in this area. For the same reasons, it wants to provide the surface system in at least one of those mission opportunities. NASA also does not want to provide the launch vehicle for more than one of those opportunities [presumably to avoid the cost]. In addition, the missions executed jointly must show progress toward MSR.

- McCuistion's presentation says that ESA would like to have a data relay orbiter for the 2016 mission.

- The joint mission plans must be "budetarily and technically realistic." Two plans apprently will be developed: "What we can afford to do, and the 'best' partnership." 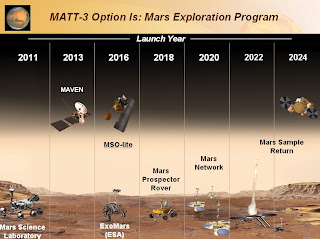 The MATT team's preferred mission sequence (click for larger version)
The Mars Architecture Tiger Team (MATT) then presented its assessment of the roadmap that best addressed scientific priorities that have been developed in the past. The goal was to reconcile those goals with the reduced budget that would be available following the MSL cost overrun. The MATT team was directed to look at NASA-only resources, but with the understanding was that the proposed missions would be examined in other forums for potential international cooperation.

- The team was told to assume that NASA would have ~$700M for a 2016 mission and ~$1.3B for a 2018 mission. These figures were for discussion only since budgets have not been decided. [The first look at actual budget possibilities will likely come with the detailed Obama budget to be submitted in April. The President's proposed budgets generally give guidance on what agencies can expect for several years. These figures are also higher than my back of the envelope musings have suggested.]

- Previous MATT roadmap exercises have identified four high priority missions to follow the already approved MSL and MAVEN orbiter missions: A Mars Science Orbiter (MSO), a Mars Propector (mid-range) rover (MPR), a network mission, and MSR. [In the past and in this presentation, MATT has identified several possible sequences for doing these four missions. Here, I will discuss only the one that seemed most favored.]

- For 2016, MATT proposed that a descoped MSO mission fly. The mission would focus on atmospheric chemistry and climate studies as well as serve as a communications relay for landed Mars missions. A previous proposal to include a high resolution camera (0.3 - 1 m resolution) would be dropped to allow MSO to fit within the new budget realities. The planned MSO mission would follow up on the discovery of methane and other key trace gases in the Martian atmosphere.

- For 2018, MATT proposed the MPR mission. This would both explore a new site at Mars and maintain core Mars exploration competencies within NASA by keeping the development teams together. This rover has been discussed in the past as being solar powered. In this presentation, it was described as as "at least MER-class," but with with the ability to land within a 6 km target area of Mars to allow access to new sites.

- For 2020, MATT proposed a Mars network mission with four or more surface stations plus supporting meteoroligical measurements from an orbiter [that presumably could be MSO] 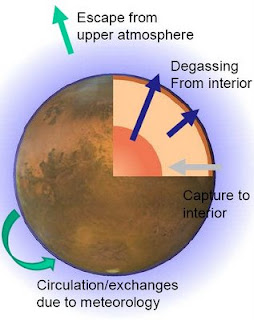 Subjects of study for the proposed Japanese MELOS Mars mission
JAXA, the Japanese space agency, also presented a concept for a mission between 2016 and 2020. The concepts seemed preliminary, but included an orbiter for meteorological studies and upper atmospher studies plus 1 to 3 landed network stations.

The presentations suggest a fruitful collaboration. One possible roadmap that would seem to meet both agencies' goals would be an 2016 ESA-led ExoMars rover with a NASA MSO orbiter. (If the Russians are included to provide the launch vehicle for ExoMars, US law may prohibit the launch of MSO by the Russians. This is, however, an area with which I'm not very familiar.) Then in 2018, NASA takes the lead with its own landed mission (presumably a rover) to which ESA contributes. Then in 2020, the two agencies plus possibly JAXA implement a network mission.

One concern I have is whether the NASA's budgets will support this aggressive of a roadmap while also funding the Jupiter Europa mission plus a sequence of New Frontiers and Discovery missions. This will be a question to be resolved not only by the details of the President's budget submission but also by the Decadal Survey review in progress. That review will take input from the entire planetary science community and prioritize missions (and by implication, allotment of the budget). Even if the MSO, MPR, and network missions don't all happen between 2016 and 2020, but are stretched out a few more years, it would still be an exciting and scientifically rich program.

And if NASA and ESA can manage to do MSR in the 2020s, I'll be delighted. Long time readers of this blog, however, know that I am a sceptic on this mission flying in my lifetime (which should give them until sometime in the late 2030s).