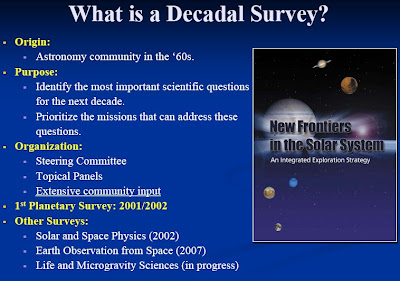 The next Decadal Survey for planetary missions is taking shape. I am encourage by what I'm reading (but more on that in the editorial notes).

Steven Squyres, at Cornell University and PI for the MER Mars Rover, has been named chair and Larry Soderblom, from the USGS Astrogeology Team in Flagstaff, Arizona, has been named vice-chair. Over the next two and a half years, the Decadal Survey will prepare a report that:


The process will be organized by panels focused on different classes of solar system bodies: inner planets, Mars, outer planets, outer planet satellites, and primitive bodies (asteroids and comets). These panels will take input from established panels (such as MEPAG, VEXAG, etc.), from town halls, from ad hoc groups of scientists with a shared interests, and individuals (with a specific note including input from students).

The following points from the latest Decadal Survey emphasize key points that will be different than the process last time:

"Compared to previous decadal surveys, this one will place much greater emphasison evaluation of the technical maturity and probable costs of candidate missions.
A key criticism of the last planetary (and astronomy) Decadal Survey was that the list of priority missions had wildly optimistic (i.e., low) cost estimates. As a result, list of missions was unaffordable.

Another key aspect of the Decadal Survey will be that "Mars missions will be considered on an equal basis with all other missions. No 'set aside'for Mars exploration will be assumed a priori." 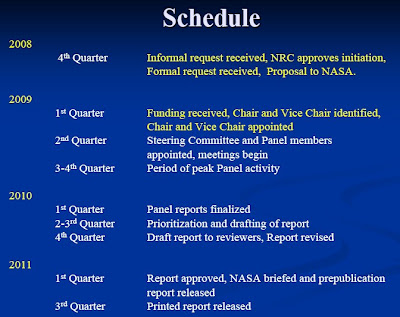 Editorial thoughts: I am encouraged by the early direction the Decadal Survey is taking. NASA and the planetary community have clearly learned from the mistakes of the last Survey, which nevertheless provided the roadmap for the planetary exploration program of the past decade. It turned out that only a portion of the program could be implemented within the available budget. (And a more capable and expensive Mars Science Laboratory was substituted for the one prioritized by the Survey.)

I expect that the Survey will still prioritize more missions than can be afforded. In my days of working budget processes, you always asked for more than you expected. What I will be looking for is a clear set of priorities both among missions and among classes of missions. If that is clear, then the highest priorities should be funded (assuming similar budgets for the next decade).

I would also be surprised if Mars does not remain a high priority and receives a good portion of the proposed resources. Looking at various mission proposals, Mars is simply cheaper to explore both because it is close and it has a relatively benign environment. A mission similar to the Jupiter Europa Orbiter (~$3B), for example, would probably be a half to a third that much at Mars.

Here are some predictions (I'll try to remember to score them in two and a half years).

I welcome your predictions in the comments.

Latest presentation on process to be followed