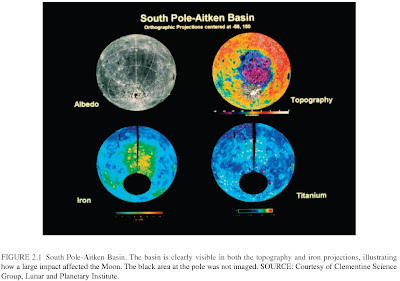 A mission to return samples from the moon has been on the New Frontiers candidate list since the beginning of the program and was re-affirmed as a candidate last year. This mission would return samples that can shed light on the early formation of the moon and solar system. The target for the sample return is the 2500 km-wide South Pole-Aitken (SPA) Basin, which is believed to be the oldest and deepest of the moon's basins. Unlike giant impact basins on the near side of the moon, the SPA basin never filled with lavas (which created the maria that are the darker areas on the moon's face). Data from the Clementine and Lunar Prospector missions suggested that the basin's surface could include material from the lunar lower crust and upper mantle. Returning samples from the basin would allow scientists to test their theories about how giant impacts influenced the development of planetary crusts and mantles.

In the words of the National Research Council report on recommended candidate New Frontiers missions:

"Melting of planetary surfaces (magma oceans) during the early accretion process of planetary bodies in the inner solar system is an important concept resulting from detailed analysis of the Apollo and Luna samples in Earth-based laboratories. The detailed analysis of samples from the South Pole-Aitken Basin Sample Return mission should verify and extend this central concept for the differentiation of the early planetary body into crust and mantle. Sample return allows samples to be analyzed with the most sophisticated instruments on Earth (many of which cannot be transported to the sampling location). And it has other benefits as well, providing the ability to share samples with many research teams for broad-based experimentation and the archiving of samples for analysis in the future when better instrumentation will exist. It is possible, for example, to conduct far more sophisticated analysis of Apollo samples today than it was when they were first returned to Earth."

"A South Pole-Aitken Basin Sample Return mission would directly address the following crosscutting themes and key questions identified in the decadal survey (numbering is taken from the decadal survey [of prioritized planetary missions published in 2003]):
The First Billion Years of Solar System History
1. What processes marked the initial stages of planet and satellite formation?
3. How did the impactor flux decay during the solar system’s youth and in what way(s) did this decline influence the timing of life’s emergence on Earth?
Processes: How Planetary Systems Work
11. How do the processes that shape the contemporary character of planetary bodies operate and interact?"

The report also notes that a SPA Basin sample return would provide "highly significant" information on the processes that led to the unique character of our home planet as well as information on the interior structure of planets. As well as being in a world in its own right, the moon is in many ways the Earth's fraternal twin. Current theories of the formation of the moon has it birthed from the collision of the proto-Earth and a Mars-sized world. In addition, the close proximity of the moon and Earth would have meant that the giant impacts still visible on the moon's surface also would have occured in on the Earth.

Two sample return missions were proposed for the SPA Basin by Michael Duke, then with the Colorado School of Mines and now retired. He first proposed the mission within the the Discovery program, but the mission was rejected as "risky for several reasons: (1) Concern that fragments, obtained from a single surface location, would be such a complex mixture of materials that fragments could not be adequately correlated to Basin units and address the principal goals of the mission (sample complexity); (2) There were no descope options – if costs were to rise, there was little in the mission concept that could be modified to reduce costs (programmatics); (3) Cost and mass margins were judged insufficient for a mission of such complexity; (4) The amount of time available for adapting to unforeseen anomalies was limited [sampling would have to occur during a single lunar day (~14 Earth days)]; and (5) There was insufficient consideration of landing risks." (http://www.lpi.usra.edu/meetings/lpsc2003/pdf/1684.pdf)

Duke resubmitted the sample return for the second New Frontiers selection. (The first selection, limited to missions to Pluto, resulted in the New Horizon spacecraft now in flight.) He described the goals of the mission and some of the strategy for addressing the shortcomings of the Discovery proposal. Specifics on the implementation were scarce. (These competitions are fierce and proposers often decline to provide details publicly that could help their competitors.) The biggest difference was that the New Frontiers mission would have used two landers. This would help mitigate the landing risk by providing a backup lander. Sampling two locations would increase the chance that a wide range of samples recording the history of the basin would be returned. Each lander would seive through 50 or more kilograms of lunar soil to collect hundreds of 4 - 10 mm rock fragments for a total sample of around 750 gm.

The New Frontiers proposal still would have had just a single lunar day to collect samples. Designing the landers to last through the long and cold lunar night apparently would have had added too much to the mission's costs. The proposal also include a small relay orbiter since the SPA Basin lies on the far side of the moon and direct Earth to lander communication would have been impossible.

Duke's proposal was selected as one of two semi-finalists in the competition, but in the end the Jupiter Juno mission was selected. I don't know if any other researcher has picked up where Duke left off to prepare a lunar sample return mission for the New Frontiers selection competition in progress. If someone does, they will benefit from the detailed mapping of the moon that has been carried out in recent years with more missions to come. That will enable careful selection of sample sites that both have a good chance of having desired material and would be safe to land on. Countering that, the problems experienced by the Mars Phoenix lander in acquiring samples may lead review teams to worry that a single lunar day is too short of a time to collect samples. Perhaps a new proposal will have a good answer to that concern.