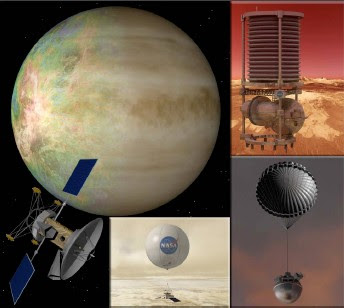 As usual, the meeting included a number of presentations. It was also followed by a Venus Geochemistry meeting that discussed scientific results and future mission plans. To keep these blog entries to a reasonable length, I'll review the presentations a couple at a time. Then I'll switch to reporting on the last Outer Planets Assessment Group (OPAG) meeting before returning to talk about the proposed Venus Flagship mission.

An update on the overall planetary program was given by James Green, Director of NASA's Planetary Division. Most of the presentation was a review of the current list of planned missions, a recap of the Mars Science Laboratory slip, and a reminder that Europa is the goal of the next outer planets Flagship mission. Green stated that the next New Frontiers Announcement of Opportunity (AO) is still being revised, but there isn't a date for its completion. There is a draft AO available that the planetary community has provided comments on, and a number of teams are preparing their proposals based on it. The MSL problems, however, slipped the schedule for the New Frontiers AO. Once the AO is formally released, we'll have the revised schedule for the selection of the next mission in this program. Sometime after the release of the New Frontiers AO will be an AO for the next Discovery mission competition. It still has not been decided whether or not radioisotope power systems will be made available for the next Discovery mission.

Ellen Stofan, chair of VEXAG, also presented a list of issues and questions on the group's plate. The largest task for this year will be to provide input into the Decadal Survey for Venus Missions. Far more missions will be proposed for the next decade by all the interest groups in the planetary community than could be flown. Getting your missions to be ranked as priorities requires defining compelling scientific questions and feasible (in terms of technology and dollars) missions to address those questions. It appears that VEXAG will use questions formulated in a previous 2007 VEXAG goals and objectives white paper as its starting point. The three highest priority goals (from Stofan's presentation) are:

"Past: Origin and Early Evolution of Venus: How did Venus originate and evolve, and what are the implications for the characteristic lifetimes and conditions of habitable environments on Venus and similar extrasolar systems?

"Present: Venus as a Terrestrial Planet: What are the processes that have shaped and still shape the planet?

"Future: Implications for Earth: What does Venus tell us about the fate of Earth’s environment?"
Resources:

I will admit to some confusion to the wealth of groups that provide input to NASA on it's planetary program. Like its Mars (MEPAG), outer planets (OPAG), and small bodies (SBAG) counterparts, MEPAG, VEXAG provides science community input into NASA on Venus science. It is not an advisory board, however, although NASA listens to and often acts on its input. There is also a Venus Science and Technology Definition Team that spent 2008 defining a Flagship-class mission for the 2020s for Venus. While this Team was formed based on VEXAG's "input", I'm not sure if it is formally a part of VEXAG or just works closely with it. In addition to the xAG's, there is also the Planetary Sciences Subcommittee of the NASA Advisory Council, which appears to be a formal advisory board that also is composed of planetary scientists, many of whom also serve on the xAGs.

The good news for those of interested in planetary exploration, all these groups post the presentations made at the meetings. This gives us insight into NASA plans and problems that was nearly impossible to get in past decades. I'm sure I wasn't the only person to make a weekly trip to the local library in years past to scan Aviation Week and Space Technology in hopes of finding a tidbit on plans and problems.