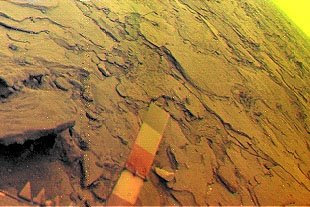 Venera 14 image of the surface of Venus

"The Venus In Situ Explorer (VISE) mission is a detailed exploration and study of the composition of Venus’s atmosphere and surface materials... VISE will make compositional and isotopic measurements of the atmosphere on descent and of the surface on landing. A core sample is obtained at the surface and lofted to altitude where further geochemical and mineralogical analyses are made. In situ measurements of winds and radiometry are obtained during descent and at the balloon station. Scientific data obtained by this mission would help to constrain the history and stability of the Venus greenhouse and the recent geologic history, including resurfacing. The technology development achieved for this mission will pave the way for a potentially paradigm altering sample-return mission in the following decade... Science measurements will be made during three VISE mission phases: (1) the descent phase [in which the lander would inflate a balloon to be lifted into the cooler reaches of the atmosphere], with atmospheric experiments and descent imaging; (2) the landed phase, with surface imaging and atmospheric and surface chemistry; and (3) the ascent phase, with surface mineralogy and atmospheric circulation analysis." - New Frontiers in the Solar System: An Integrated Exploration Strategy (2003)

The planetary Decadal Survey published in 2003 called for a regular program of New Frontier missions that would be medium priced (~$650M today). Included in the list of candidate missions was the VISE mission. It had two primary goals: (1) resolve the key questions about the composition of the Venus atmosphere, particularly the lower atmosphere not measured by the Pioneer Venus probes in 1978 (2) provide for detailed chemical analysis of surface samples. The Soviet Venera landers had previously sampled the surface, but their chemical analyses had to be completed in less than an hour. To measure the surface composition in the detail desired would require hours of data collection, too long for a lander to survive in the hellish heat of Venus' surface. To get around this problem, VISE would collect a sample, bring it inside the lander, and then inflate a balloon to carry out a leisurely analysis in the cooler upper atmosphere.

So far as I know, no one has proposed a Venus lander for the New Frontiers mission as elaborate as that envisioned VISE mission. However, a mission with two simpler landers was proposed for the second New Frontiers selection competition. (There have been only three competitions. The first was limited to Pluto missions and resulted in the New Horizons mission. The second selected the Jupiter Juno mission. The third is in progress.) Called the Surface and Atmospheric Geochemical Explorer (SAGE), the mission in many ways would have been an upgraded Venera mission. You may recall that the Soviet Venera landers were dropped off by flyby craft to make measurements during the atmospheric descent and for 30 - 60 minutes on the surface. Data relay was done through the flyby craft. The SAGE mission had a similar concept, except that two landers would be carried, one targeted at the extensive Venusian plains and one at the highlands (tessera). Capabilities of the landers would be considerably upgraded versus the Soviet landers. (Technology would have progressed in the nearly 20 years since the last Venera mission.) SAGE would make chemical analyses of the atmosphere all the way to the surface. During the latter parts of the descent, it would have taken descent images that would have provided our first high resolution images of areas of Venus larger than the immediate area in front of the landers. SAGE would also have a pancam camera on a periscope, presumably to take panoramic images of the landscape around each lander.

In other ways, SAGE was very much like the Venera landers. It would have only an hour -- perhaps two -- on the surface before heat would end its mission. During that time, an arm would grab a sample [presumably from a fixed location relative to the lander] and delivered that sample to an air lock. Once inside the lander, an X-Ray Fluorescence and Diffraction spectrometer would analyze the surface sample. A dedicated microscopic imager in the lander would image the area from which the sample had been taken.

The geometry of the mission trajectory and the need to sequentially collect each lander's data by the carrier craft would have limited the choice of landing sites to a circle around the Venusian globe. Landing sites would have been further limited by the need to land in areas where the circle lay in daylight.

The presentation describing the SAGE mission listed a number of challenges that would have to be resolved. Developing craft and instruments that could survive the heat and pressures at the Venus surface within the New Frontiers budget were among them. [I have heard that these challenges have been major obstacles for Venus in situ Discovery and New Frontiers missions. Venus is hard to explore, and hard equals higher risk and costs.] Test facilities that replicated the Venus surface would have to be built. Doing all of this technology and test facility development within the time frame allotted for a New Frontiers mission development was also listed as a risk. And the best launch opportunity for SAGE lay outside the allowed time frame for the second New Frontiers mission. [I have heard through the internet grapevine -- for whatever that is worth -- that this ultimately disqualified SAGE. If so, ironically, the launch of the second New Frontiers mission was delayed past the original deadline to fit funding profiles.]

Update: In 2008, a new panel reviewed candidate missions for the New Frontiers program. They kept Venus in situ exploration as a candidate mission, however the goals were simplified: "The New Frontiers announcement of opportunity [for the mission selection that is in progress] should not exclude a Venus In Situ Explorer (VISE) mission that addresses the major goals for chemical sampling of Venus’s mid- to lower atmosphere and for characterizing atmospheric dynamics but that lacks a surface sampling component." It appears that including a landed mission component within the New Frontiers mission may not be possible within the allocated budget. The Venus Exploration Analysis Group (VEXAG) looked at a SAGE-like mission and estimated its costs at ~$800M. That is not necessarily outside the New Frontiers mission scope. The craft plus instruments and operation must fit within $650M, but the launch vehicle does not. The VEXAG document does not state what was included within its estimate. However, it seems likely that SAGE would be a tight fit if it is possible within a New Frontiers budget.

SAGE's limited surface lifetime would also limit the quality of the chemical analysis of the soil or rock collected. Recent work has suggested that stand off chemical laser analysis coupled with Raman spectroscopy may be possible for Venus. (This would be similar in concept to the Mars Science Laboratory's ChemCam instrument.) Such an instrument on a Venus lander could conduct chemical analysis at a number of points in the landing area. However, this would be another system that would need to be developed.

Editorial note: A SAGE like mission to Venus would be my preference for the next New Frontiers mission. It has simply been too long since we have visited the surface of Venus and there are key outstanding questions about the chemical composition of the atmosphere that bear on the formation and evolution of Venus. I suspect, however, that this may be too complex a mission for the New Frontiers budget. I would love to be proven wrong. 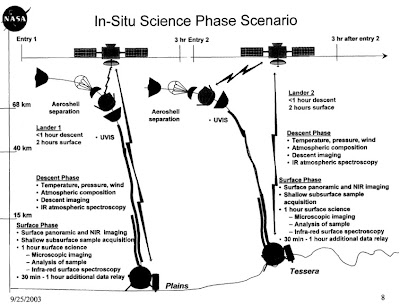 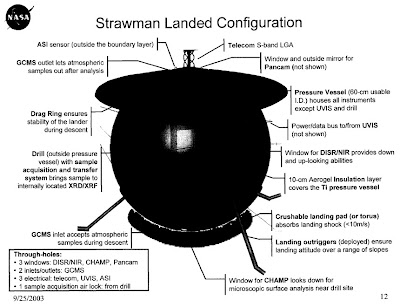