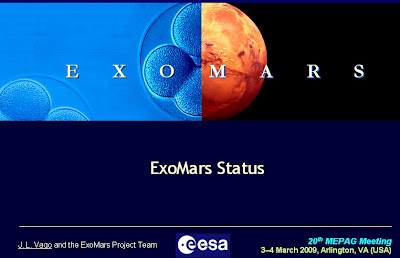 Aviation Week in its subscription only print edition has an article describing how the ESA ExoMars mission "is now struggling to stay within its specified weight limits, making the downsizing of its science paload seeminly inevitable." This comes on top of the mission's challenges to fund the mission: "Only 850 million [euro] ($1billion) of the mission's estimated 1.2 billion [euro] price-tag has been committed so far and, despite talks with NASA and Russia about joining forces on the mission, planners are skeptical they will obtain the full amount needed."

This article led me to read up on ExoMars on the web and in the update presented at the last Mars Exploration Program Analysis Group (MEPAG) meeting (see links to resources below). ExoMars has effectively grown into two sophisticated missions. The first is the rover that most readers of this blog are familiar with. It will focus on exploring Mars for signs of past or present life. It carries the Pasteur package of 12 instruments that was originally estimated at 16.5 kg and now estimated at 24 kg.

The second mission is housed in the lander stage that carries the rover to the Martian surface. It carries the Aurora package of 11 instruments that was originally estimated at 20 kg and now estimated at 60 kg. This lander would be the first sophisticated geophysics package delivered to Mars with instruments to study seismology, the radiation environment at the surface of Mars, meteorology, and magnetics among other goals. 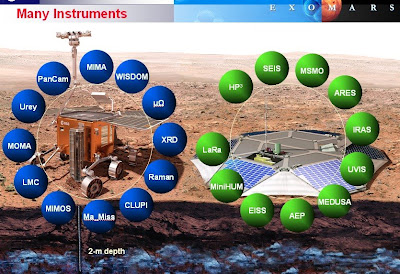 The MEPAG ExoMars presentation clearly laid out the priorities for the mission in order of priority:

"To search for signs of past and present life on Mars;
To characterize the water/geochemical environment as a function of depth in the shallow subsurface;
To study the surface environment and identify hazards to future human missions;
To investigate the planet’s subsurface and deep interior to better understand its evolution and habitability."

The presentation also showed a landing band between 5 degrees south and 45 degrees north. Areas circled included northern plains where subsurface ice may lie within a meter of the surface -- within the reach of the rover's drill. Other sites circled include low elevation ancient cratered terrain including Mawrth Vallis which has phyllosilicate (clay) minerals and Meridiani.

I was surprised by the growth in the ambitions for the geophysics package; I guess that I haven't paid enough attention to the mission. Given the priorities for the mission, the many of the measurements of the Aurora package appear to be lower priority. I would expect cuts in its instruments before those of the rover based on these priorities. Unfortunately, the seismology instrument appears to be included based on the lowest priority goals for the mission. A network mission for Mars is high priority for the coming decade by both NASA and ESA. I've read elsewhere that having the seismology of Mars characterized by ExoMars would aid in the design of the seismology instruments for the follow on network mission.

A description of instruments planned for both the rover and lander can be found at http://www.scitech.ac.uk/SciProg/Aurora/ExoMars/ExoMarsHome.aspx Click on "next" for a brief overview of the mission followed by instrument descriptions.