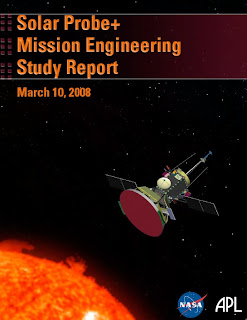 The science magazine Discover (April 2009 issue) has a colorful two page spread (sadly, not available on the web) on the solar probe mission scheduled for launch in 2015. This mission will use multiple Venus flybys to lower its perigee (perisol?) until the craft skims as low as 9.5 solar radii above the sun's equator. While the body of the craft hides behind a high tech sun shield, instruments will study the composition of material leaving the sun and image the activity on its surface. In the words of a preliminary study report that defined the mission:

"Solar Probe+ will be an extraordinary and historic mission, exploring what is arguably the last region of the solar system to be visited by a spacecraft, the Sun’s outer atmosphere or corona as it extends out into space. Approaching as close as 9.5 RS * (8.5 RS above the Sun’s surface), Solar Probe+ will repeatedly sample the near-Sun environment, revolutionizing our knowledge and understanding of coronal heating and of the origin and evolution of the solar wind and answering critical questions in heliophysics that have been ranked as top priorities for decades. Moreover, by making direct, in-situ measurements of the region where some of the most hazardous solar energetic particles are energized, Solar Probe+ will make a fundamental contribution to our ability to characterize and forecast the radiation environment in which future space explorers will work and live."
This mission implementation is a lower cost version of an original plan that would have used a Jupiter flyby to enable a flight over the sun's poles and two encounters just four solar radii above the sun. That mission, however, was unaffordable with NASA's current budgets. The new plan trades closeness to the sun for the ability to make repeated passes within 35 solar radii in orbits that gradually lower to the planned minimum encounter distance for a minimum of three passes below 10 solar radii.

This full report provides a full description of the science, spacecraft and mission. The Solar Probe website itself hasn't been updated and much of the material reflects the previous, higher cost design.

There's no word on when the proposal for the follow on solar lander mission will be released. 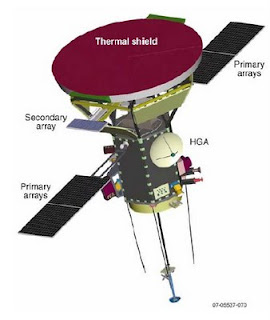 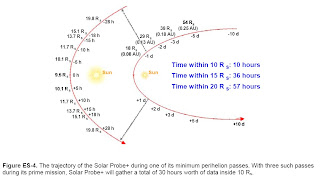 Spacecraft and solar encounter profile; click on image for a larger version. (These two illustrations are from the preliminary report.)