Following up on Mars' Methane 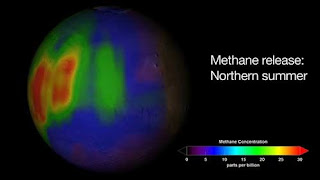 Today brought exciting news of local concentrations of methane in the Martian atmosphere. From the press release:

"A team of NASA and university scientists has achieved the first definitive detection of methane in the atmosphere of Mars. This discovery indicates the planet is either biologically or geologically active... "Methane is quickly destroyed in the Martian atmosphere in a variety of ways, so our discovery of substantial plumes of methane in the northern hemisphere of Mars in 2003 indicates some ongoing process is releasing the gas," said Michael Mumma of NASA's Goddard Space Flight Center in Greenbelt, Md. "At northern mid-summer, methane is released at a rate comparable to that of the massive hydrocarbon seep at Coal Oil Point in Santa Barbara, Calif." Mumma is lead author of a paper describing this research that will appear in Science Express on Thursday."

Look here for a longer explanation of the importance of the methane discovery.

Observations of trace gases from Earth observatories will always have problems with precisely pinpointing sources, amounts, and any possible seasonal variation. A mission, the Mars Science Orbiter (MSO), has been proposed to follow up on previous studies that suggested the presence of methane. Here's a summary of the proposed mission as presented to MEPAG (a group of Mars scientists that advises NASA about science and mission priorities) (click here for the entire presentation; this material is from slide 23): 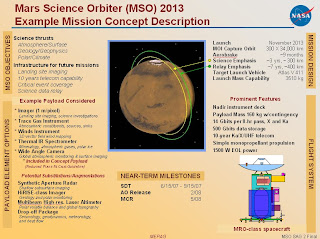 Possible MSO plan (note: 2013 launch no longer possible; see below). Click on image for a larger version or see the original presentation.
This presentation dates from last June; the presence of methane apparently is no longer controversial. In addition to studying the martian atmosphere, the orbiter would also act as a telecommunications relay for landed missions for a decade or more. A high resolution camera (~1 meter resolution) has also been discussed for this mission. If you'd like to read a lot more about the science and mission scenario, look at this report which examined possible orbital missions to the Red Planet for the next decade. (After this report was published in 2007, atmospheric focus was selected for MSO.)

At ~$1.1B, this mission would not be cheap. Right now, the Mars Science Laboratory (MSL) for 2011 and the MAVEN orbiter focused on the upper atmosphere for 2013 are firmly on the roadmap. After the MSL cost overruns, NASA can put only about $450M into a 2016 mission, which would presumably be used to make NASA a junior partner with in a joint rover mission for 2016. So the earliest MSO could fly would be 2018. However, it would be in competition with a NASA led rover. NASA is concerned that if it delays a follow on rover to MSL beyond 6-8 years, it will lose the engineering team that knows how to build these craft.

So the earliest we are likely to get a mission to Mars to follow up on this exciting discovery would be 2018 or possibly 2020. Such are the realities of living within a budget. Perhaps this discovery will be seen as exciting enough for the administration and Congress to provide NASA with additional money. Even in this case, 2016 would probably the the earliest launch date for MSO given realistic planning, engineering, and testing leadtimes.