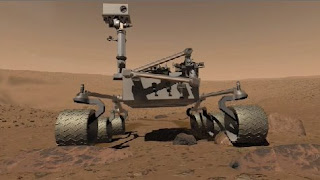 I listened this morning to the Planetary Science Subcommittee (PSS) meeting to get the science community thoughts on the proposed plan handle the slip in the Mars Science Laboratory (MSL). First, some very quick background:

- The MSL mission slipped from a 2009 to a 2011 launch. This will cause a ~$400M cost increase in this mission that must be absorbed by NASA in its 2010 and 2011 budgets by taking money from other places in the budget.
- NASA has a number of standing committees of outside scientists who provide recommendations for various aspects of its program. This is the mechanism by which the larger science community can be informed of the options NASA is investigating and to provide a single voice of input back to NASA on those options. The PSS looks at the entire planetary program. (Other committees look at smaller portions of the program such as Mars, Venus, small bodies, and outer planets.)

Much of the disucssion was done with the audience in attendence being able to see slides that presented complicated budget informaiton. I could not see these. So that I minimize the chance of getting the facts wrong, I will keep these notes at a high level. The PSS traditionally posts presentations made to it on the web within a few days of meetings, so I presume that this will happen again and we can all see those details.

In making it's recommendations on how to handle the MSL budget increase, NASA made certain ground rules:

1) The other major planetary mission in development (Juno Jupiter mission (2011 launch), lunar GRAIL mission (2011 launch), and the Mars MAVEN mission(2013 launch)) would proceed as planned. NASA emphasized that slipping the Juno mission would be a huge hit to post 2011 budgets. MAVEN will not be slipped because NASA wants to ensure that it will be in place as a communications relay mission if necessary. (NASA expects both Mars Odysey and MRO to still be operating, but both will be in extended missions at that time frame. At current fuel consumption rates, MRO could still be operating, it was said, into the 2020s.)

2) The planetary research and analysis budget would not be touched. This is the budget that funds the science community and cuts here would have the impact of causing scientists to leave the field (as well as mean that the science results returned from previous missions would not be analyzed).

3) The New Frontier mission selection in progress will continue as planned. A number of universities and industry teams have committed significant funds to prepare proposals, and NASA felt that it would be unfair to slip the selection process.

4) The outer planet Flagship mission will launch around 2020 (a decision made independent of MSL to align NASA and ESA budgets), which slips the need for large amounts of money to carry out preparatory analysis to post 2011.

5) NASA and ESA will merge their 2016 Mars missions into a single mission. 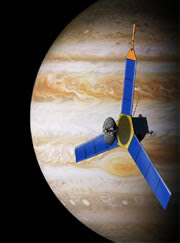 Juno orbiter
The good news is that NASA found ways to fund approximately $353M of the cost increase by moving money around in budgets that don't impact the rest of the planetary program (beyond the Mars program). The other ~$47M would come from one of the following (1) reducing reserve funds for Juno, which increases the risks to that mission, (2) delay the start of the selection of the next Discovery mission from 2009 to 2010 (which would possibly also delay the first use of the the new ASRG power sources, which apparently NASA would prefer not to do (although it still hasn't formally decided to use ASRGs -- still working through technical and other issues)), or (3) delay the international lunar network (which would also use ASRGs, apparently). The PSS was asked to rank these three options. If the MSL budget increases beyond what is currently planned, then NASA would have to execute more than one of these options.

The net impact of all of these slips, NASA said, was to reduced the funding available for a 2016 Mars mission from a large (unstated) amount to something in line with a Scout mission (~$450). By combining efforts with ESA (which has budgeted ~$800M as a recall), the two space agencies can still fund a substantial mission. In addition, technology development for future Mars missions will be cut. Either the Discovery or lunar network may also be slipped.

On another, non budget issue, slipping the MSL launch creates a conflict with the Juno launch. Both will use the same launch pad, and by the rules currently used for pad preparation, the two missions cannot both launch in 2011. NASA is looking at two solutions (1) using a Type I trajectory for MSL instead of the currently planned Type II which moves out its launch by a couple of months but has some technical issues relating to the entry and landing that sounded workable or (2) finding ways to reduce the preparation time needed so both Juno and MSL can launch in their preferred launch windows.

I've done my best to capture the options and impacts and will let you know when the actual slides become available, but there may be some errors in my reporting. As an editorial aside, I will say that I fully agree with the approach that NASA is taking to this problem. The priorities are the same as I would have selected. Based on my management exerience (in high tech and not in aerospace), I suspect that the movement of funds to cover the first $353 mission will increase the risk that new budget problems will be found. NASA had previously budgeted these funds to other uses for good reasons. There may be additional budget impacts in future from spending this money on MSL instead.