The journal Nature just published a long article on the choice between Europa-Jupiter or Titan -Saturn for the next Flagship mission to launch around the end of the next decade. (Follow the links at this blog entry for detailed descriptions of the two mission proposals.)

Nature, in a separate editorial in their subscription-only issue comes down marginally in favor of Titan over Europa. For them the deciding factor is that the Titan mission can sample Titan directly with its lander and balloon. The Europa mission can identify possible sites for landers. Conclusive proof of life on Europa would have to come with yet another flagship mission that samples the surface or subsurface.

For the last two decades, NASA has launched a Flagship class (~$3B in today's dollars) about once a decade (Cassini in the late 1990s and Mars Science Laboratory in 2011 and the outer planets flagship in 2018-2020). That means the loser of this contest likely would get its next shot in the 2020s, when it will have to compete for selection against Mars, Venus, and possibly other destinations. Even if the losing outer planets Flagship mission is selected then, it would not reach its destination until the 2030s or even 2040s.

This blog entry looks at the question of what mission could fly at a fraction of the cost of the proposed flagship mission within the next 20 years and provide a meaningful fraction of the science for the full proposed mission. For this mental exercise, I will set a few rules. ESA's contribution must be less than 650M euros (~$850M), which is what it may spend on the flagship mission. NASA's contribution would have to be less than $650M (above what it will pay for the selected Flagship orbiter) including instruments but not including launch vehicle, which is the price of a New Frontiers class mission.

I'll make a disclaimer here. I am not a planetary mission planner, just an enthusiastic follower. What I suggest may in fact be folly on one or many points. Wherever I can, I draw use analogies to past mission proposals to make sure that the ideas have at least some basis in reality.

A study was done a few years ago was done to see what the cheapest meaningful Titan mission would be, and based on several mission concepts, the answer came back that it would be ~$1.5B (with a Titan balloon judged as having the greatest science value). That floor means that no New Frontiers-class mission alone could meaningfully add to our knowledge of Titan.

So, we need to look for ~$1.5B to mount a mission to Titan-Saturn. Let's suppose that instead of providing a Jupiter-Ganymede orbiter, ESA decided to go ahead an build the Titan lander and balloon that is part of the (in this scenario) not selected Titan-Saturn proposal. ESA's 650M euro appears to be enough to provide those two craft, but not a launch vehicle or a carrier craft to ferry the two in situ vehicles from Earth to Titan over a flight of nine years or so. NASA could provide another $650M plus a launch vehicle that would bring resources near $1.5B.

While many possible mission concepts could be done, in this case I'll suggest a mission based on the study mention above. In the version we'll look at here, the two ESA in-situ probes and and a carrier craft launch in 2020 and arrive at Titan in 2029. Both Titan probes are released as the carrier passes Titan without entering Saturn orbit. The balloon in this imagined mission would have to relay its data directly to Earth. Most of its instruments would use low data rates and might not be overly impacted. The number of pictures returned, however, would drop dramatically without a capable Saturn orbiter to act as relay. The Titan-Saturn Flagship mission's balloon would have returned ~1.3Tb of data. Back of the envelope calculations based on data rates stated for a standalone Titan balloon like that considered here suggest a data return of ~20Gb. Also lost in the scenario is the detailed global mapping of Titan as well as the loss of the Enceladus flybys the orbiter would have done. 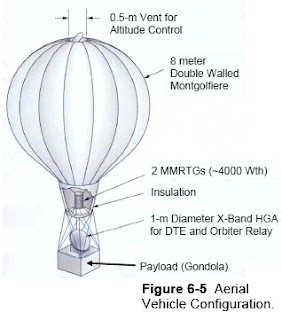 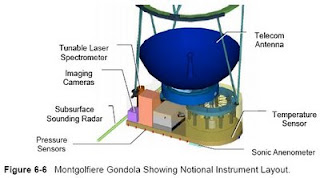 Design concept for a Titan balloon that would not use an orbiter for data relay. Click this link for the full document.
Under this scenario, science is also lost at Jupiter. The ESA craft was to have done a campaign of Callisto encounters and the close up examination of Ganymede from orbit that the ESA orbiter would have done. The NASA Europa orbiter already is planned to carry out a handful of flybys of these moons (plus Io flybys). Perhaps some of this science loss in this scenario could be made up by having the NASA Europa orbiter do an extra year of Callisto and Ganymede flybys prior to entering Europa orbit.

In this scenario, the full ESA funding goes to the Titan lander and balloon that are support by a NASA Saturn-Titan orbiter. Any Jupiter mission, therefore, would have to fit within the $650M New Frontiers budget. ESA estimates that it needs the equivalent of $850M to build and fly a Ganymede orbiter. To make our mission fit within the New Frontiers budget, we'll assume that it would be a Jupiter orbiter that conducts multiple flybys of the icy Jovian moons but orbits none. We'll also assume that the orbiter comes no closer to Jupiter than Europa's orbit to minimize radiation exposure and therefore the cost of radiation hardening. Based on past studies, I think solar cells could be used, but if not, we'll assume that a plutonium-based power system is available within the budget.

A mission similar to what I'll propose, a Ganymede observer, is already a high priority for the New Frontiers program. That mission is generally assumed to be a Jupiter orbiter that makes multiple passes by Ganymede. In this exercise, we'll assume that the craft is the same (with additional radiation shielding) but also includes Europa and Callisto as targets of flybys. I'll call this mission the icy moons observer.

Jovian and Saturnian icy moon missions have been studied a number of times, and similar instrument suites keep being proposed. I'll assume that our mission includes a narrow angle camera, an ice penetrating radar, instruments to sample the vapors sputtered off the moons, a magnetometer, and a visual-near infrared spectrometer. Several additional instruments, such as a thermal spectrometer and a wide angle camera, would be useful but may not fit the budget.

In the 1990s, missions to study Europa after the Galileo mission were done. They all assumed a Europa orbiter as the preferred mission, but analyzes of multiple flyby missions for Europa were also done. Such missions included up to 30 Europa flybys. I don't know if the radiation hardening available within our budget would permit that many flybys. (Jupiter's radiation field increases as you come closer to Jupiter. The radiation at Europa is more intense than at Ganymede which in turn is more intense than at Callisto). I'll simply assume that as many Europa flybys will be done as the radiation hardening permits.

In addition to Europa, our craft would perform flybys of Callisto and Ganymede. ESA's Jupiter-Ganymede orbiter would have done 19 Callisto flybys before orbiting Ganymede. In theory, our conceptual icy moons observer could do that many flybys of both moons each. However, mission operations are expensive, so perhaps 5 flybys of each of the three moons during the primary mission might be more reasonable. If the spacecraft is healthy at the end of its nominal mission, additional moon flybys coud be done in an extended mission. The craft also would make long distance observations of Jupiter and Io.

It is important to remember that the science returned by our conceptual mission would be much less than that which would have been done by orbiters of those moons. Several studies of icy moon flybys have concluded that 15-25Gbits of data could be returned per flyby – far more than returned on each moon by the Galileo missio with its crippled main antenna. That is a small fraction of the data that would have been returned by the Ganymede orbiter (~1.5Tbits) or the Europa orbiter (~4.5Tbits).

We need to think of each flyby as sampling a small portion of a moon with high resolution images and a transect of ice penetrating radar data immediately beneath the ground track at closest approach. This is a far cry from the high resolution coverage of the entire globes that would have been done by the orbiters. The science is far more than Galileo provided but far less than the dedicated orbiters. Still, if a Ganymede observer with these limitations has been ranked as a high priority mission, then a mission that observes three icy moons should be even higher priority.

This mission would also be a nice compliment to the Titan-Saturn mission. Titan is a an icy world, but one in which atmospheric haze and active surface processes will likely will make it hard to determine the history of internal geologic processes. The results of those processes are exposed on the surfaces of Jupiter's icy moons for easy study. 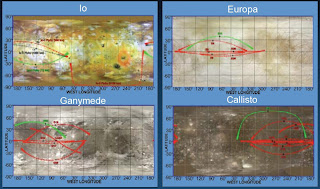 Examples of ground tracks from flybys that would be done by the Jupiter-Europa orbiter prior to Europa orbit. An icy moons explorer might have similar ground tracks except for Io, which probably could not be visited because of radiation. Click on image for larger image or this link for the full presentation.

Editorial: If I Were King

If I were king, my preference for exploring the outer solar system would be to select the Titan-Saturn mission and a New Frontiers icy moons observer. The reduced Titan mission described in this post feels too compromised to me without the orbiter to relay the balloon's data. Also, we would lose all the close flybys of Enceladus that were planned for the Titan-Saturn mission. Exploring Titan after Cassini seems to need a flagship class mission. At the same time, Jupiter and its icy moons are fascinating targets in their own right. If my thought exercise has a basis in reality, it would seem that we could add significantly to our knowledge of those worlds (plus remote observations of Jupiter and Io) for something within or approaching the cost of a New Frontiers missions. And we launch New Frontiers missions two to three times a decades so there could be launch opportunities that would deliver the icy moons observer to Jupiter before or within a few years of the arrival of the Titan flotilla.

I welcome comments from professional mission planners correcting my mistakes and oversights.