A Solution to the Plutonium Problem

In a previous post, I discussed the limitations of NASA's plutonium 238 supply to power future planetary missions. Using radioisotope thermoelectric generators (RTG), which have flight heritages to the 1960s, NASA has enough plutonium on hand or on contract to purchase from Russia to fuel the Mars Science Lab (MSL), the next outer planets flagship mission, and 2-3 smaller missions. Restarting the production of plutonium would cost hundreds of millions of dollars (I haven't seen a firm figure in today's dollars), which haven't been budgeted. Without a solution to this conundrum, exploration of the outer solar system would largely halt after the launch of the next Flagship mission ~2020.

NASA has been aware of this problem and been working on a solution. As I understand it, thermoelectric generators work by creating an electron flow from a hot material (heated by the plutonium) to a cooler material. An alternative approach uses a Stirling Engine, dubbed the advanced Stirling radioisotope generator (ASRG). The heat source now is used to power a piston that generates the electricity. The cool part of this (if that term can be applied to a fuel source that literally glows red hot!) is that only about a quarter of the plutonium is needed to generate the same power as NASA's most recent RTG, the MMRTG being used by the Mars Science Lab. Until recently, NASA wanted a flight demonstration of the ASRG before committing it to a major mission such as an outer planets Flagship craft. In the most recently posted documents for the Saturn-Titan Flagship mission, however, ASRG's were the stated solution. ASRG's were an alternative to MMRTGs in the Jupiter-Europa presentation. The reason for the switch wasn't stated in the presentations. It could be, however, that the launch delay (for programmatic funding reasons) by 2-4 years gives NASA the additional testing time it feels it needs to commit a major program to a new technology.

ASRGs do create some design challenges for the spacecraft. Because they have moving parts, they create vibrations that could affect instruments requiring stability such as cameras. For this reason, the units are supplied as pairs that time the movement of their pistons to dampen vibrations. I had a hallway conversation with a NASA engineer at a recent conference, and he felt that the dampening would be sufficient to not interfere with cameras. He expressed concerns, however, about whether or not the vibrations could be dampened enough to work on a station with a seismometer.

If the next Flagship mission uses ASRGs, the plutonium supply problem seems to be solved for the next 10-20 years. (Eventually, the plutonium will decay sufficiently that it will not be useful. The half life is 87.7 years.) In fact, it would appear that NASA would have more plutonium than it it needs for identified missions (assuming all missions after MSL use ASRGs).

There are many places in the solar system where missions using solar panels are impossible -- Neptune or the permanently shadowed craters at the lunar south pole -- or inconvenient -- exploring the moons of Jupiter or floating in the clouds of Venus. What types of missions could be enabled if NASA had small plutonium power supplies available? Each ASRG pair produces ~280 W of power or ~6700 W hours each day. The MER rovers on Mars with freshly cleaned solar panels produce about 650 W hours each day. Even a single ASRG (they apparently don't have to used in pairs if vibrations aren't a problem) still produces far more power than the MER rovers have available on a good day.

About a year ago, NASA funded a number of studies of small Discovery and Mars Scout missions (~$450M) that would use ASRGs as an enabling technology and provide long life tests (ASRGs are designed for 14 year lifetimes). I'm told that eventually the results of all the concept studies will be made available. In the meantime, four of the teams have made details of their proposals public. One, the Io Volcano Observer, has already been discussed in this blog and more thoroughly by Jason Perry. In the next few weeks, I'll summarize the information available on the other three missions. 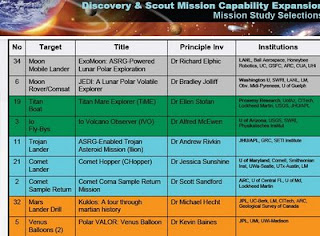 List of small mission concept studies in progress that would use ASRGs. From http://www.lpi.usra.edu/opag/march_08_meeting/presentations/dudzinski.pdf Click on image for a larger image.