What's on the Planetary Mission Roadmap

The latest update on NASA planetary program includes several slides on NASA roadmap of missions. This got me to thinking that it might be useful to provide a list of all planetary missions that are currently planned for future launch or that have not yet reached their destinations.

I'll start with the three roadmap slides from the NASA presentation (click on images for larger views). 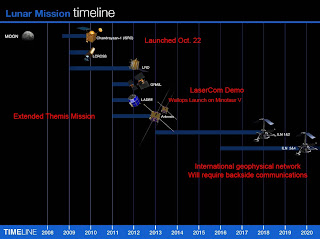 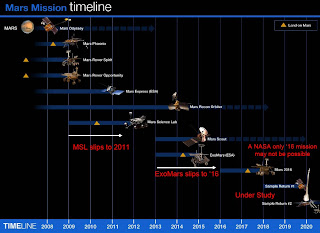 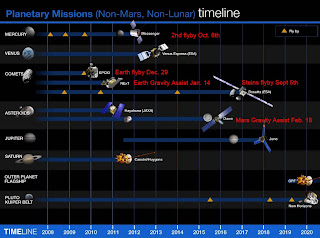 The European Space Agency's (ESA) roadmap is simpler (click here to go to their website for more information):

Rosetta will arrive at comet 67P/Churyumov-Gerasimenko in May 2014.
BepiColombo will launch in 2013 and arrive at Mercury in 2019.
I'm not sure why the ExoMars rover and network station (launch 2016) aren't on ESA's graphic; perhaps it has not been formally approved.

The Japanese Aerospace Exploration Agency has two approved planetary missions that I know about. Venus-C will launch in 2010 to study that planet's atmosphere. The Mercury Magnetospheric Orbiter (MMO) is part of the BepiColombo mission and shares that mission's timeline. Japan is also considering a Jupiter Magnetospheric Orbiter if Europa-Jupiter is chosen by NASA and ESA as the target of the next outer planet's Flagship mission.

So far as I know, the Russian and Chinese space agencies have a single joint mission, Phobos-Grunt planned. The Chinese craft will orbit Mars while the Russian craft will collect samples from the surface of Phobos and return them to Earth. The Finns are planning to provide two Mars landers for network science. Launch is scheduled for October of this year with Earth return in 2012.

The Indian space agency has announced plans for future lunar landers and Mars orbiters, but I don't know if they are funded or not.

All in all, the 2010s are shaping up to be as rich as the last decade for planetary exploration.

I'm sure that there are missions I've missed (and possibly contributions by entire nations). If you see errors or ommissions, please let me know and I'll update this post. vkane56[at]hotmail[dot]com.