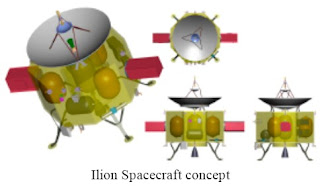 This is (for now, see below) the last of the descriptions of Discovery mission concepts being studied that would use the new ASRG plutonium power sources. Previous entries looked at the Io Volcano Explorer, the Venus VALOR balloon, and the CHopper comet mission.

The Jovian Trojan asteroids share an orbit with Jupiter. Their exploration was ranked as a high priority by the last planetary Decadal Survey (2003):

"The Trojan Asteroid/Centaur Reconnaissance mission would send a KBP-like flyby reconnaissance spacecraft equipped with imaging, imaging spectroscopy, radio science, and, potentially, other instruments to make the first explorations of both a jovian Trojan asteroid and a Centaur. Beyond simply opening up these two new classes of primitive bodies to exploration, this mission has deep ties to understanding the origins of primitive bodies. In particular, the Trojan flyby would sample primitive material from the jovian accretion region of the nebula; it would also allow an important recalibration of the bombardment flux on objects in the jovian system and would offer new insights into space weathering and other processes affecting asteroids, particularly in the main belt."

"The Ilion mission will flyby several Trojans and rendezvous and land on one of them. It carries remote sensing instruments to characterize the asteroid’s structure and landed instruments to measure its surface composition. Preliminary orbit calculations have shown that several of the Trojans can be reached by Discovery-class missions with reasonable travel times... Approximately the final 2 years of the cruise will be spent within the L5 Trojan cloud... After [orbit insertion], Ilion will observe the target asteroid for several months and a landing site will be identified. After landing, a variety of compositional and physical measurements can be made."

See this abstract for more information.

The mission concepts that have been summarized in this blog are only about a third of the concepts under study, but they are the only ones that have had information about the proposals released publicly. My understanding is that the final report from each team preparing a report will be released publicly after they have all been collected; however, this information is more than a year old and I don't know that it is still the plan. If the proposals are released, they will be discussed in this blog. 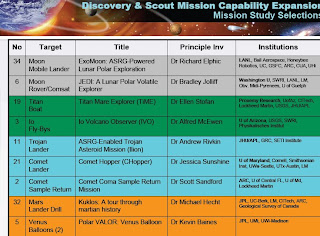 List of small mission concept studies in progress that would use ASRGs. From http://www.lpi.usra.edu/opag/march_08_meeting/presentations/dudzinski.pdf Click on image for a larger image.
The concepts that have been released show that the small, lightweight (and plutonium frugal -- important with a limited supply) ASRG power systems open up a whole new class of small missions. The Venus VALOR and Io Volcano Observer could be done with batteries or solar cells, respectively, but the science return is much greater with the ASRGs. Missions that are combinations of orbiters and landers like CHopper and Ilion appear to be uniquely enabled by lightweight plutonium power supplies.

A bit over a year ago, I shared a beer with one of the members of the team preparing the proposal for the Titan Flagship mission. He told me that the current plutonium power systems limited the flexibility of mission designers. Because of the size and weight of these power systems, it just wasn't practical to design small Titan balloons and long-lived landers. He said that with smaller plutonium power supplies, a Titan Flagship mission could conceivably have more than one plutonium-power in situ craft. (The current proposal for Titan has a battery powered, short-lived lander and a single plutonium-powered balloon.) Perhaps the availability of ASRG power supplies would enable a Titan Flagship mission to have two balloons (each smaller than the one currently planned) or a balloon and a long-lived lander.

ASRGs also would enable another class of missions -- long lived networks of stations to monitor seismic activity, heat flow, weather and the like on the moon or Mars. That will be the subject of a future blog entry.