NASA and ESA have just posted two comprehensive joint summary reports of the proposed Flagship missions to Jupiter-Europa-Ganymede and Saturn-Titan-Enceladus. If you want readable descriptions of the science rational and mission plan, then I highly recommend these documents. In this blog entry, I'll provide a brief review of the documents.

Both summary reports begin with compelling cases for the science for each mission. The short extracts below give an idea of the flavor the cases made for these missions.

The Case for the Jovian System and Europa
"Jupiter is the archetype for the giant planets of the Solar System and for the numerous planets now known to orbit other stars. Jupiter’s diverse Galilean satellites—three of which are believed to harbor internal oceans— are the key to understanding the habitability of icy worlds. The Galilean satellites are quite distinct with respect to their geology, internal structure, evolution, and degree of past and present activity. To place Europa and its potential habitability in the right context, as well as to fully understand the Galilean satellites as a system, the two internally active ocean-bearing bodies — Europa and Ganymede — must be understood. Thus, the Europa Jupiter System Mission (EJSM) is guided by the overarching theme: The emergence of habitable worlds around gas giants.

"Europa is unique among the large icy satellites because its ocean is in direct contact with its rocky mantle beneath, where the conditions could be similar to those on Earth’s biologically rich sea floor. The discovery of hydrothermal fields on Earth’s sea floor suggests that such areas are excellent habitats, powered by energy and nutrients that result from reactions between the sea water and silicates. Consequently, Europa is the prime candidate in the search for habitablezones and life in the solar system. However, the details of the processes that shape Europa’s ice shell, and the fundamental question of its thickness, are not well understood."

The Case for the Saturn System and Titan
"Titan is a complex world more like theEarth than any other: it has a dense mostly nitrogen atmosphere, the only other place besides Earth to have one, it has an active climate and meteorological cycle where the working fluid—methane—behaves under Titan conditions the way that water does on Earth (Figure 2.2-1). And its geology—from lakes and seas to broad river valleys and mountains—while carved in ice is, in its balance of processes, again most like Earth. Beneath this panoply of Earth-like processes an ice crust floats atop what appears to be a liquid water ocean. Goal A seeks to understand Titan as a system, in the same way that one would ask this question about Venus, Mars, and the Earth...

"Titan is also rich in organic molecules— more so in its surface and atmosphere thananyplace in the solar system, including Earth ... Goal B is to understand the chemical cycles that generateand destroy organics and assess the likelihood that they can tell us something of life’s origins...

"For Goal C, two aspects of the Saturnian system must be studied. These are Enceladus, whose interior is exposed to analysis through an active plume-geyser system, and the Saturnianmagnetosphere which is a medium of exchange of matter and energy with Titan. Here the objectives divide into exploring those aspects of the Saturnian magnetosphere directly related to Titan, and exploring the composition of the Enceladus plumes and whether the source region is liquid water (with implications for the sources of heating). Exploring Enceladus, if liquid water exists in its interior, adds a second target of astrobiological importance to the mission: a “two for one” in the search for life and its origins in the solar system."


The reports also provide considerable detail on the mission implementations. The following chart, compiled by myself, gives a comparison of key facts pulled from the reports (click on the image for a larger view): 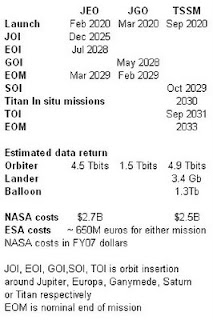 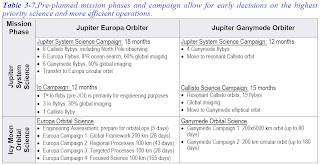 and an example of the detail from the Titan Saturn System Mission report: 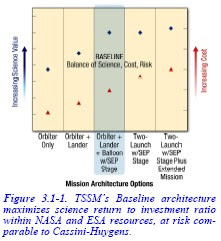