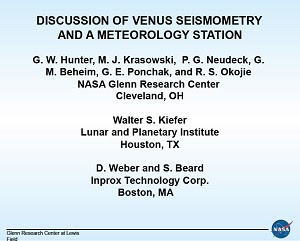 A high priority goal for Venus exploration has been to enable long term stations on the surface of that planet for meteorology and seismic measurements. The heat and pressure of Venus has seemed to put this goal out of reach. At the last VEXAG meeting, a possible solution was presented.

I'll let those with an engineering bent look at the presentations for details. Basically, the solution is to return to instrument concepts from before the advent of current, electronics based solutions. Modern instruments on Earth, or that would be sent to less hostile planetary surfaces, use electronics to hold a reference mass nearly motionless relative to a reference frame. In previous eras, geophones performed a similar function in which a coil generating field was affected by the motion of a magnet. Magnetic materials apparently are questionable for the temperatures and pressures of Venus, so a proposed instrument would use a high temperature variable inductor.

Power would be supplied by a sodium sulfur battery that, with some moderate technical development, could power a station for over a half year, the baseline requirement. Data storage apparently wouldn't be possible within the station. Instead, any data would be relayed real time to a orbiter. A series of stations would be placed on the surface so that one or more would always be in communication with the orbiter.

Basic meteorology measurements would be enable by the same approach of using older technology approaches, updated to function on the surface of Venus.

Editorial thoughts: The presentation lays out a technology development plan to make long-lived (at least within the context of the surface of Venus) measurements possible. Costs of the stations was not addressed. However, Venus is a sister planet with a hellish twist. Understanding the deep interior would allow us to better understand how terrestrial planets evolve and function. I hope that this approach is realistic. It would be nice if it could be afforded within a Discovery class mission. If not, it may be a possible add on to the proposed Venus Flagship proposal that will be discussed in this blog in about a month when the final proposal report is published.

One could imagine a hybrid lander/station. Part would be designed to last for an hour or so on the surface and could provide descent images and surface images. Perhaps basic surface chemistry measurements could be made. After that portion of the lander fails as a result of heat and pressure, a longer lived network station could make measurements for half a year, perhaps significantly longer.