Several small items today:
More Ice on Mars - The journal Science has an article about how studies of small fresh craters on the surface of Mars have revealed pure ice beneath a thin soil surface.  "Spanning northern latitudes of 43° to 56° (Phoenix landed at 68°N), five new craters were a few meters in diameter, a few decimeters deep, and floored with a bright, white material that looked like clean ice."  This discovery brings two thoughts to mind.  First, we still know so little about Mars.  A series of moderate price missions to increase our knowledge seems very sensible to me (as opposed to moving quickly to a $6-8B sample return).  Second, a Phoenix-like lander with a drill that could bring up samples from 1-2 m beneath the surface would be a great vehicle to explore this northern ice.  If the mission were powered with Advanced Stirling Radioisotope Generator (ASRG) fuel sources, it could potentially study the surface for a period of a year or two, giving it the luxury of time that Phoenix did not have. 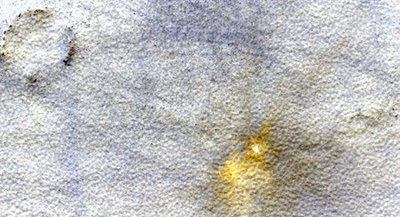 Ice within a small crater in the northern plains of Mars
MetNet - In the comments, Ted Stryk writes, "MetNet's precursor mission did not get bumped by the Chinese orbiter - there is room for both. Finland had funding problems and couldn't get the penetration ready for 2009. The plan now is a launch of one or two penetrators as a stand-alone mission to be launched on a Volyna rocket in 20011. However, if Phobos-Grunt is indeed delayed to 2011, it may indeed carry the precursor mission."  That is good news.  You can check out http://metnet.fmi.fi/ for more information on this Finnish Mars penetrator. 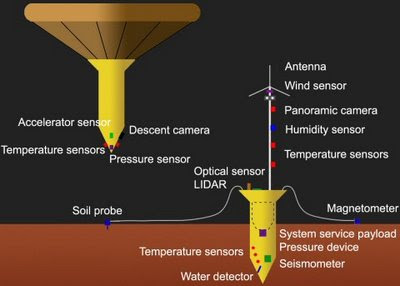 Finnish MetNet Mars Penetrator
Europa Small Landers - Anonymous said [about Europa penetrators and hard landers]: "Very interesting, but I wonder why no mention of any type of lander/impactor/penetrator was made in the EJSM Joint Summary Report. The Titan mission had 3 in situ elements...I always wondered why the Jupiter team left any mention of in situ out of their reports."
My understanding is that their were a number of ground rules for the Flagship studies.  For example, the ESA Titan in-situ craft had to be carried by the American orbiter.  Similarly, the Europa orbiter could not include any lander.
Now that the destination for the next Flagship has been selected, my understanding is that a lot of variations can be studied.  I remember reading somewhere that small landers provided by a non-American party can be considered.  These small landers should be cheap enough that an individual European nation, Japan, Russia, India could provide one.
There are issues of technology that can survive the radiation field at Europa.  While the lander may only need to survive a few days of independent operation, it will also accumulate radiation exposure through the entire period leading up to its release.  The lander(s) could be carried in shielded tubes or boxes (essentially, vaults) but that weight might add up quickly.
Mars 96 - Anonymous wrote, "Didn't Mars 96 have two penetrators onboard? IIRC, these were supposed to use the inflatable descent system developed by Lavochkin."  Good catch.  I had forgotten about the two small landers and penetrators carried by the ill-fated Mars 96 mission.  Wikipedia has a nice entry summarizing the mission.  http://en.wikipedia.org/wiki/Mars_96