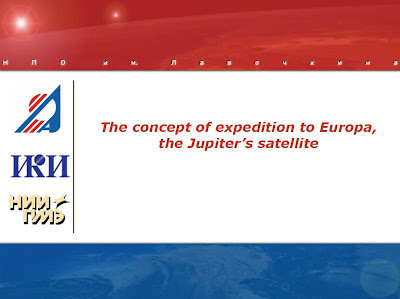 At the Russian sponsored Europa lander meeting last January, the Russian space agency presented a concept for a Europa orbiter. This presentation focused on the spacecraft hardware. Other presentations looked at possible scientific instruments.

The mission outlined is an ambitious one. The mission consists of a series of stacked stages and spacecraft. The first stage would be a solar electric propulsion unit that would help deliver the orbiter stack to Jupiter following a three years cruise. A propulsion stage brakes the stack into Jupiter orbit where gravity assists allow the eventual Europa orbit insertion in early 2024. The stack then separates into a Europa orbiter and a highly capable soft lander. 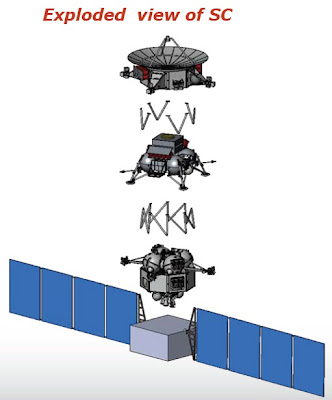 The science potential of the mission could be substantial. During the Jupiter system tour, the spacecraft would perform thirteen Ganymede and four Callisto flybys. The orbiter would carry 50 kg of scientific payload. That is sufficient for capable studies during the flybys and while in Europa orbit. The lander would host 70 kg of instruments. Both the orbiter and lander would be powered by RTG's, providing the mission with considerable operational flexibility. 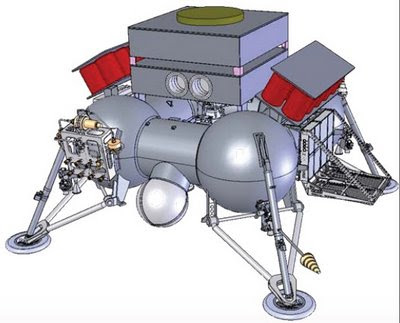 Editorial Thoughts: The mission concept certainly is ambitious. Left unmentioned is the elephant in the room for any Europa mission -- the radiation environment. This seems a curious oversight. NASA has spent a decade developing technology that can withstand the radiation at Europa. Perhaps considerable work is underway to develop the technologies to solve this problem and simply wasn't included in the presentation. It appears that the time in Europa orbiter may be limited to a small number of months, which would help. Without this issue being addressed, however, I am left wondering whether or not this mission is merely a pipedream or a serious proposal. If anyone reading this blog attended the mission, your clarification would be very welcome.

Even without the issue of radiation, the mission is technically ambitious, especially for a first flight by the Russian space agency beyond the orbit of Mars. The presentation does point out that the Europa lander concept builds upon technologies that will be used in the Phobos sample return and the lunar lander missions. I don't doubt that the Russians are capable of developing the technologies needed -- they are the only nation to have landed on Venus. The Venus program, however, built up capabilities over time with missions becoming more sophisticated as technologies were developed and concepts proven. Going directly from Phobos and the lunar surface to Jupiter and the surface of Europa seems a large step.

I also think that the time frame for the mission seems wrong. It would seem more logical to me to have the lander arrive after NASA's Jupiter Europa orbiter has mapped the moon and identified both safe and scientifically interersting locations. This would delay arrival to 2029. The extra five years also could provide more time for the Russian space agency to hone the technologies for a Europa mission.

I hope that my skepticism is unfounded. A Europa lander would be an excellent addition to the 2020's exploration of the Jovian system.

Website with all presentations. Look towards the bottom for a number of presentations on potential instruments. http://arc.iki.rssi.ru/conf/2009elw/presentations/

Email ThisBlogThis!Share to TwitterShare to FacebookShare to Pinterest
Labels: Europa