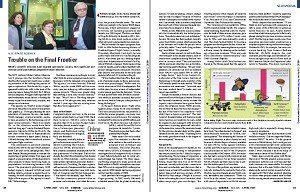 The journal Science (April 3) has a two page article on the problem of cost overruns in NASA science missions. The article quotes the head of the science program, Edward Weiler, as saying that the thing that prevents him from starting " 'sexy science" missions is all the "new sexy missions started 5 years ago that are costing more than they were supposed to... When I walked into this office, there were a lot of promise made out there, and [the science] communities were pretty happy... Over a 10-year period there were $6 billion of promises made [in planetary sciences] that could not be met.' " Weiler needs $900 million more each year just to keep up with missions on the Earth science roadmap.

The article notes the James Webb space telescope that has grown from $1B to $4B, the $600M Mars Science Laboratory has become $2.2B, the Glory mission to sutdy aerosols and black carbon in Earth's atmosphere is 50% over budget, and the Solar Dynamics Observatory is three times its initial cost. An independent study showed that 25% of NASA's mission went at least 40% over budget.

The article notes that there are no simple answers. If there were, they would have been implemented already. The existence of an "iron triangle among NASA centers, lawmakers, and contractors," is part of the problem. Missions developed by a NASA center are protected by the local Congressional delegations. Every member of the triangle knows that NASA will cave when faced with cost overruns. Missions that have been approved are protected at the cost of starting new missions.

Weiler blames scientists on the Decadal surveys for believing lowball cost estimates. Scientists reply that their estimates come from both NASA and independent assessors.

The process of preparing cost estimates will be much more rigorous in the next round of Decadal Surveys. (Astronomy and planetary surveys are in progress.) Any mission that isn't already underway goes back into the process to be re-evaluated.

Science also has a interview with Weiler posted on its website. A choice tidbit:

Weiler says that the science of the Titan Flagship mission was absolutely compelling, but that the Titan mission was "more or less in the blueprint stage. When we looked at a cost schedule and technical readiness, it was a slam dunk [in favor of Europa]."
Editorial Thoughts: I'm not sure that the iron triangle isn't an iron quandrangle. The science community -- or at least those whose missions become started -- also benefits from lowball estimates that become protected missions.

I would like to think that better run Decadal Surveys will solve the problem. I expect that missions proposed in the next round of Surveys will be better costed. Two issues will remain, I believe. First, estimating the costs of complex, one of a kind missionss is hard. Second, if we knew the true costs to begin with, we would still end up with fewer missions. Our expectations would simply be more realistic.

In my mind, part of the solution could be to include a mix of mission costs within the high priority list of recommended missions. For example, the planetary Decadal Survey could say that flying three Discovery and two New Frontiers missions in the next decade must be budgeted first. Then remaining funds can go to Flagship missions. With this approach, its likely that 4 - 6 missions will fly in the next decade, even if the highest ranked Flagship mission overruns its budget and must be delayed.

Link to Science article (will cost $15 unless you have a subscription) http://www.sciencemag.org/cgi/reprint/324/5923/34.pdf