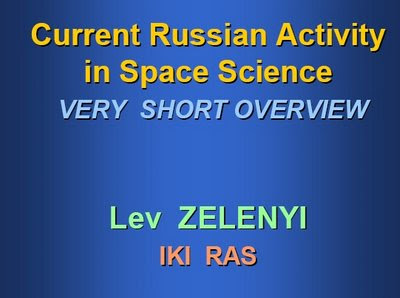 The last several posts on this blog have focused on issues of management and budget. It's time to return to hardware and flight missions. The next several blogs -- assuming no breaking news -- will focus on information in presentations from a Russian-hosted conference on Europa landers.

Today, though, we'll start with an overview of the Russian planetary exploration program. In the United States, the Russian space program receives little attention. I was delighted to find a "very short overview" of their program presented at a conference on Europa landers last January. Information on the planned astronomy missions was indeed a very short overview. There was, however, a good amount of information on their upcoming mission to the Martian moon Phobos and short summaries of future missions.

Phobos appears to be a D-type asteroid captured into Martian orbit. Previous gravity measurements by other craft have shown that its density is too low to be a solid object. It instead appears to be a rubble pile.

The Phobos Sample Return mission (also known as Phobos Grunt, which means "Phobos soil") due to launch this fall will be an ambitious mission. Its primary goal will be to collect and return a 0.2 kg sample from the surface of Phobos for analysis in Earth laboratories. The return craft will also carry an experiment prepared by the Planetary Society that will take samples of micro-organisms to Phobos and back to Earth. The goal of this experiment will be to assess whether micro-organisms can withstand the rigors of space travel with the sample canister playing the role of a simulated meteoroid. If the organisms survive, then it is possible that life could have passed from planet to planet in meteoroids blasted off their surfaces by large impacts. 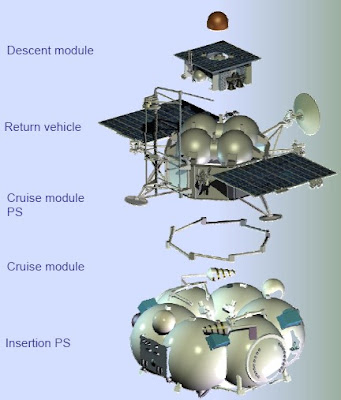 Phobos Sample Return spacecraft.
In addition to the sample return, the mission will study Phobos with an array of remote sensing and in-situ instruments. The presentation doesn't provide details of the instruments except the gas chromatograph, which appears to be detailed as an example of the sophistication of the instrument suite. I found relatively little detail on the mission on the web. From the instrument list, it appears the the spacecraft will conduct remote sensing of the moon prior to landing. Following the landing, according to Wikipedia, the spacecraft will collect surface samples and launch the return craft on its journey to Earth. The lander will then study the soil with a variety of instruments over a period of a year.

The mission will also carry a small Chinese orbiter that will study the interaction of the solar wind with Mars' atmosphere.

Brief information was also given in the presentation for several other planned planetary missions:

A roadmap slide showed the schedule for the missions. The Phobos sample return and the two lunar missions were shown as firm dates. The other missions had their launch dates covered with a question mark indicating that they may not yet be committed missions.

Editorial Thoughts: It's good to see Russia returning to planetary missions. The Phobos sample return promises to deliver a wealth of information. According to Wikipedia, the schedule for the 2009 launch is tight. A backup launch date would be 2011.

As I recall, the Phobos mission originally was to carry a prototype of the Finnish MarsNet penetrator. Apparently that has been replaced by the Chinese orbiter. I am a fan of the MarsNet penetrators, and am disappointed to see testing of the landers delayed.

The Venus mission seems to me to be in the early conceptual stage. The list of vehicles and science goals is quite long. The U.S. Venus science community has been putting together a proposal for a similar mission that would cost ~$3B. Even assuming less ambitious goals for the Russian mission, it still seems like quite an undertaking for a launch date that is just 7 years away. If any of the readers of this blog have more information on this, I hope you will post them in the comments.

I do have one armchair explorer hope for the Phobos mission. I would love it if the landing site provided a view of Mars on the horizon. Given Phobos' low orbit, the Martian surface would dominate the sky. That would be a picture worth hanging on the wall. 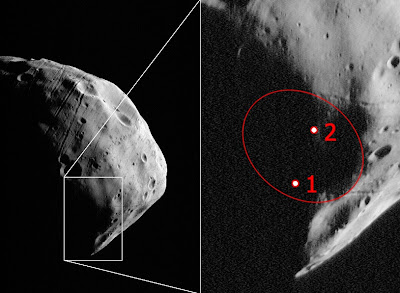