Casey Drier is the Advocacy and Outreach Strategist for the Planetary Society.  He and I both follow the politics and budgets associated with NASA's Planetary Science program. Casey writes excellent commentaries on these topics, and he has kindly given me permission to repost his posts from the Planetary Society's blog on my post.  (The Planetary Society has also asked me to be a guest blogger, and you will see many of my posts on their site.)

Next week, the President will propose the budget for Fiscal Year 2014 and give projected budgets for the next five years.  As Casey points out below, NASA uses the projected budgets to determine which missions it can afford to develop.  While Congress may change budgets each year (and fortunately did so for FY13), NASA requires a stream of funding over several years to plan, develop, launch, and operate a planetary mission.

Casey posted a couple of weeks ago on the final Congressional action on the FY13 budget, which provided one year increases to several key budgets.  I've used the amounts in his post to update the graph below that shows actual, Congressionally approved budgets and the proposed out year budgets from the President's FY13 budget proposal released over a year ago.  (You can read what I wrote about the original FY13 budget here.) 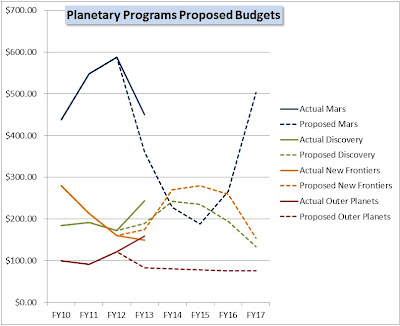 
I've copied Casey's post from yesterday on what to watch for in the FY14 budget proposal below.  You can read the original here. 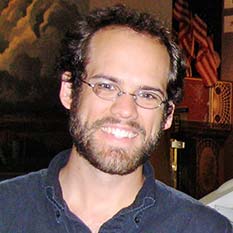 In less than a week – April 10th – the White House will release its proposed budget for 2014. Even though Congress ultimately approves federal spending, this is a very important document for NASA for the following reasons:
Here's what to watch for:

Will Planetary Science see funding restored?
Last year, the White House requested a $309 million cut to NASA's Planetary Sciences Division, which manages all spacecraft and research for planetary missions. This was a big cut from the 2012 level that was the beginning of a decline that would last several years. The program was set to lose an additional $59 million in 2014.
But just a few weeks ago, Congress funded Planetary Science at a much higher rate than the White House requested for 2013. Will the President's budget acknowledge this, or will it stick to the original plan and continue to underfund the program?
A New Start For a Europa Mission?
Congress mandated that NASA set aside $75 million in 2013 on "formulation activities" for a mission to Jupiter's moon, Europa. This long-sought-after mission is not in the five-year budget projections, though, so NASA cannot make long-term spending decisions to actually build the thing. If funding is specified within the future budget of the Planetary Sciences Division, we'll know that the Administration has bought into the idea and we'll have a real mission.
How will NASA pay for its Asteroid Retrieval Mission?
Last week, someone leaked the news that NASA will use $100 million to start planning a mission to capture an asteroid and move it somewhere in the vicinity of the moon. It's unlikely that NASA's total budget will increase, so the money will have to come from areas within the Agency. Will it come out of the science budget? The Exploration budget? If so, what programs will be cut to enable this program?
What about those spy satellites?
Remember when the NRO donated two space-ready telescopes to NASA? Will there be funding to utilize this hardware and make a mission? If so, where does the money come from within the very tight Astrophysics budget?
Will Education funding be safe?
NASA recently issued internal memos suspending all major education and public outreach activities. This was due to the Sequester, but, similar to Planetary Science, the White House had requested a cut for the Education division last year, only to see Congress restore it. Will they cut education and public outreach officially?
Shenanigans
We're always on the lookout for these. For example: last year, funding for scientific research in Planetary Science appeared to see an overall increase, but it was only because a previously unrelated robotics program had been moved into its purview.

We'll be parsing the details closely as soon as the document becomes public, sometime on Wednesday morning on the 10th.