Reactions to the Budget Proposal

The future of NASA’s planetary science for the next decade will be decided here on Earth in the offices of the President’s administrators and Congress.  It takes five years to conceive, develop, and launch relatively simple missions such as those flown by the Discovery program.  Technically complex missions such as Mars rovers or Europa orbiters require longer periods to mature the concepts and bring all the required technologies to flight readiness.  NASA’s funding over the next two or three years will determine whether it will be ready to launch complex missions seven to ten years from now. 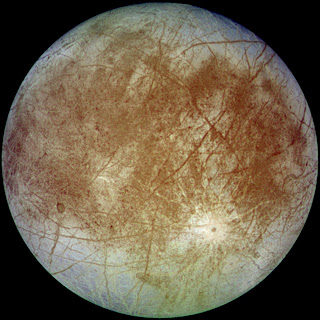 The President's proposed FY14 budget would end planning for a NASA mission to Europa.

A week and a half ago, the President releasedhis proposed budget for Fiscal Year 2014 and budget projections for the following five years.  That proposal continues support for NASA’s smaller planetary missions in the Discovery ($450-500M) and New Frontiers ($750M-1B) programs.  Funding for a 2020 Mars rover based on the Curiosity rover’s design is foreseen in future budgets.  The technology program to mature technologies to enable future missions was cut to provide funding to develop new supplies of plutonium-238 to enable missions that cannot depend on solar power. (I missed this implication in my initial budget analysis because the budget documents provided no detail on how technology funding would be spent.)  The budget proposes no funding for maturing the design of a future Europa orbiter even though Congress had just weeks earlier inserted funding for this in the FY13 budget signed by the President.

The budget did proposed detailed analysis of and technology development for a major new manned spaceflight initiative to bring a small (~7 m diameter) asteroid into lunar orbit where it could be examined by NASA astronauts.

Entangled in discussions of the FY14 proposed budget are plans of how to cut the just enacted FY13 budget by approximately 5% to meet the terms of the sequester.  Press reports have suggested that NASA plans to cut much of the increase approved by Congress for the planetary program in the FY13 budget to reduce cuts to other programs.

The President’s budget proposals are just that – proposals subject to change as Congress, the scientific community, and private citizens review the impacts and lobby for changes.  Since the budget proposal was released, the dance of lobbying and staking out positions has begun.  In this post, I’ve rounded up a summary of reactions as reported on various websites.  If you are an American citizen, I urge you to make your opinions known to your representatives in Congress.  (See the end of the post for information on how to easily do this.)

The American Astronomical Society’s Division for Planetary Sciences is one of the major associations for professional planetary researchers.  They released their analysis of the budget last week: [The proposed budget] “continues the same cuts to NASA’s planetary science program that were proposed in last year’s FY13 Budget Request. The FY14 request is almost $300M less than the FY12 approved operating plan… There is some good news: the Research and Analysis (R&A) program appears to receive an $8M increase in FY14 compared to FY12, and remain flat for the out-years. Funding would be provided to the Discovery Program which may enable advancement of the next AO to FY14… Many other elements of the NASA planetary program, however, suffer. The Europa Clipper pre-project study funded by Congress in FY13 has no future according to the FY14 Budget Request… Cassini might be shut down in FY15… One concern is that while the total funding requested for the Mars 2020 rover mission seems adequate, the funding profile is heavily “back-loaded” meaning the bulk of the funds would be provided in the last two years. Lessons learned from past missions show back-funded missions to be at high risk of cost over-run.”

Space News reports that Senator Mikulski, chairwoman of the Senate’s  Appropriations Subcommittee on Commerce, Justice, Science, and Related Agencies that funds NASA among other agencies, is “concerned” about the level of cuts proposed for the planetary program in the FY14 budget compared to the FY13 approved budget.

A group of two Senators and two Representativeswrote NASA reminding its administrator that Congress approved a larger FY13 budget and requesting that NASA apply the sequester evenly across its programs.  This letter apparently was in response to the reports that NASA planned to eliminate much or all of the increase in the approved FY13 planetary budget to preserve funding for other programs from the sequester.

Editorial Note: As is usual in NASA related Congressional positions, all the senators and representatives taking stances represent districts or states with substantial NASA activity.  While protecting local jobs is a primary survival instinct for any politician, the support for a broader planetary program among these members of Congress seems genuine.  They took care to ensure that a substantial portion of the cuts proposed by the administration were reversed in the final FY13 bill in ways that supported the scientific community’s recommendations in the Decadal Survey.  The proposed FY14 budget would reverse much of the increase in the FY13 budget.

The Planetary Society advocates for a vigorous robotic and human programs to explore the solar system.  After leading (and largely winning) a spirited fight to have many of the cuts proposed in the original FY13 budget reversed, they are back again this year fighting the cuts in the FY14 budget.  You can read their plans here.
Editorial: U.S. Planetary Science: Fading to Black

Two former senior managers in NASA’s science program, Robert Braun and Noel Hinners, wrote an editorial forSpace News (which does not require a subscription to read).  “By any objective measure, planetary science is one of America’s crown jewels… Despite the success that has built up over decades, today we are on a path that relinquishes U.S. planetary science leadership. Starting in 2017, with the end of the Juno mission at Jupiter and the Cassini mission at Saturn, NASA will only have spacecraft at or on their way to one planet: Mars… Because it takes at least five years to conceive, design and implement a planetary science mission, this cliff is not only upon us, it is getting larger with each passing day. The next suite of planetary science missions should already be in development… Unfortunately, President Barack Obama’s 2014 budget request for NASA continues the draconian path for planetary science laid out in the administration’s 2013 request… Does the U.S. really want to cede leadership of the scientific exploration of the rest of the solar system to other nations?”

Editorial Note: The opinion piece somewhat overstates the Mars focus.  The administration’s proposed budget continues support for the Discovery and New Frontiers programs.  While Discovery selections can target Mars (and the InSight Mars geophysical station in development does), it is likely that at least some future selected missions will target other destinations.  None of the approved targets for New Frontiers missions, including the OSIRIS-REx asteroid sample return mission in development, include Mars.

However, Braun and Hinners are correct in their assessment of large missions (>$1B), where only Mars missions are envisioned.  And by the end of the decade, 60% of NASA’s planetary mission budget would focus on Mars, with the rest split between the more limited Discovery and New Frontiers missions.  This is not the balanced program of destinations envisioned in the Decadal Survey.

Reaction to the Asteroid Retrieval

In general, the most positive responses to NASA’s proposal to bring an asteroid to lunar orbit came from supporters of future asteroid mining.  Among other observers, the reactions ranged from wait and see the results of the analysis to be done this year to skepticism.  (If this proposal interests you, both the Space Review and Space Policy Online articles go into some depth in their analysis.)

The Space Review quotes Steve Squyres, (Principal Investigator for the Mars Opportunity mission, past chair for the planetary Decadal Survey, and current chair of NASA’s Advisory Committee) as saying, “I can’t assess it,” he said. “I don’t know if this can be done or not. I don’t know what it’s going to cost. It’s a very new idea, it’s very immature, it needs a really hard, carefully considered look, and then we’ll see.”

Space Policy Online reports that, “Skeptics point out that, apart from technical challenges, there is no explanation of where the money will come from to execute the mission in future years...   NASA said it thinks it might be able to do it for less [than the current ~$2.5B estimate] because some of the work is already underway, but the basis for that optimism is obscure since the agency will not even complete a mission concept study until the end of this summer… there is confusion over the relationship of this mission to protecting Earth from asteroids as well as why about humans are needed to bring back a sample of an asteroid when NASA already is building a robotic probe (OSIRIS-REx) to do that (not to mention that Japan already has done so and is planning a second mission), and the budget is murky in the short term and lacks credibility for the long term.”

Editorial Thought: I find the asteroid retrieval proposal intriguing.  I think too little is known about the technical issues and true cost to build a strategy around it just yet.  I look forward to learning those details as they become available in the next year.  For the current year, NASA is increasing funding for technologies essential to a possible retrieval but that would also be useful for other missions.

The DSP news release provided practical advice on how you can share your opinions on NASA’s planetary budget with Congress, which will write the final FY14 budget:

“We urge every member of the Division to write letters to your two senators and your representative expressing: (1) your thanks for the past support of Congress; (2) your concern about the sequester and the implications of the President’s FY14 Budget Request for the FY13 budget and all later years; and (3) your plea for continued support from Congress.

“Please write to your senators and representative today. A hand-written letter, faxed to your representative, is best. You can also use the website provided by The Planetary Society to send your own letter or their letter, which you can edit (http://www.planetary.org/get-involved/be-a-space-advocate/take-action/); you do not need to be a member of The Planetary Society to use their website.

“To influence the FY13 NASA operating plan and the FY14 budget, the time to act is now. Please support planetary science and do not delay. A sample letter is given below, and will be posted on our website.”