The President’s Office of Management and Budget has released its requested for NASA funding for Fiscal Year 2014.

The budget also projects funding for an additional five years.  Because NASA’s missions require multiple years of funding to develop, launch, and operate, these projections are what NASA’s managers will use to decide what missions they can fly.  So if Congress, for example, funds a new mission for a single year (say an Europa mission, as it did in the final passed FY13 mission) and that mission isn’t in the five year forecast, NASA’s managers cannot plan to take that mission to completion.  (Because NASA is part of the President’s administration, NASA managers are required to support and plan to the projected budgets provided by the President’s Office of Management and Budget.)

My description below is based on the FY14 budget proposal.  The President’s larger budget proposes to replace the sequester (which began in FY13 and is current law to continue for a decade) with budget cuts elsewhere in the budget.  NASA’s FY12 budget was $17.8B.  Under the sequester, the FY13 budget will be $16.6B.  However, the proposed budget for FY14 is $17.7B.  If Congress does not agree to end the sequester starting with the FY14 budget, the numbers in the post may well go down.

Because the planning to implement the FY13 budget sequestration will not be completed for another month or so, the budget document does not list an FY13 budget amount for most items.  The graphs in this post either use the projected budgets in the FY13 proposal or the amounts that Congress approved (but that may change because of the sequester).

The budget does propose to define a mission to capture an asteroid and return it to the vicinity of the Earth.  Very little of this funding is in the Planetary Science Division, so I will not discuss this program in this post. 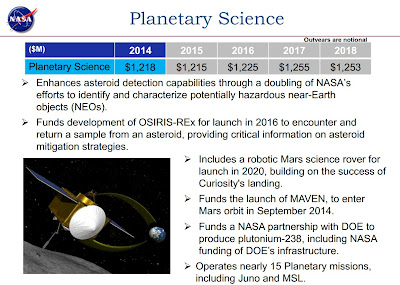 All missions in development or currently flying remain fully funded (but see below on continuing mission funding).  Missions in development are the lunar LADEE orbiter (2013 launch), Mars MAVEN orbiter (2013), Mars InSight geophysical station (2016), and the OSIRIS-REx asteroid sample return (2016)  (and contributions for several foreign planetary missions).  In NASA’s Heliophysics program, funding is maintained for two solar missions, a joint mission with the European Space Agency, Solar Orbiter (2017), and a NASA mission that repeatedly will approach very close to the outer atmosphere of the sun, Solar Probe Plus (2018).

The budget proposes to increase the Discovery program ($424-500M missions) sufficiently to enable the selection of the next mission to begin in early 2014 instead of 2015.  At this higher funding rate, NASA can afford three to three and a half Discovery missions per decade (my back of the spreadsheet calculation) instead of two.

The budget fully supports a robust Mars program.  Funding is projected for the Mars 2020 rover, which will be based on the Curiosity rover’s design and entry and descent system.

The New Frontiers program would continue at essentially the same funding rate, which would allow slightly less than two missions per decade.  The selection of the next New Frontiers mission is scheduled to begin in 2016.

Funding is provided for producing new plutonium-238 to enable missions that cannot operate on solar power.

The budget proposed to double funding (to $40M per year) for the search for Near Earth asteroids.

Funding for Research and Analysis (which supports the planetary science research community) will have a small increase (from $122M in FY12 to $130M in FY14).  The Technology program, which develops new technologies to enable future missions, will have a slight budget decline in FY14 and then relatively flat budgets (but with ups and downs) in the out years. 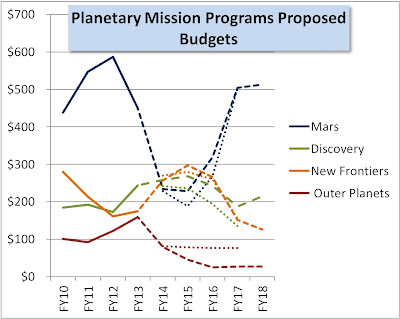 Congressionally-approved budgets for major Planetary Science mission programs (solid lines) and projected budgets from the FY14 budget proposal (dashed lines).  Dotted lines show projected budgets from the FY13 budget proposal.  The Mars and Discovery programs are projected to have larger budgets in the FY14 proposal than in the FY13 proposal, while the Outer Planets program is projected to have smaller budgets.  The FY13 sequester may cause changes to the Congressionally-approved FY13 budgets, especially for the Outer Planets program.  Click on the image for a larger version.

The administration really, really does not want to fund a Europa mission.  The Outer Planets budget drops precipitously after FY14 and the end of the currently funded Cassini Solstice mission (but see below on Cassini’s future).  The budget documents state that, “The Europa Study Team submitted its final report in response to the recommendation by the decadal survey to immediately examine ways to reduce the cost of the mission… The budget, however, does not, and cannot, accommodate any of these mission concepts at this time. ... The Outer Planets Flagship project is not funded in FY 2014. NASA is not able to support development of an Outer Planets Flagship mission in the foreseeable future.  Instead, as described in the Mars Exploration Program section, available funding supports a future Mars program that is consistent with the first priority of the National Academies' decadal survey for planetary research. “

While Congress added significant new funds to the final FY13 NASA budget to begin work on a Europa mission, this funding is not continued in the new budget proposal.  [I suspect that this funding will be deleted from the FY13 budget as NASA adjusts budgets to account for the sequester (see this post for more).]

As mentioned above, the proposed budget appears to fully fund all operating missions through the end of their currently approved missions.  Where a spacecraft is expected to still be operational at the end of the currently approved funding, the document states that future mission extensions can be funded if approved by NASA’s Senior Review process.  (This is a review by senior scientists to evaluate and rank the value of continued mission operations and funding.)

For the Mars program, the budget proposal shows the operating budget for FY14 for each mission, and then has a large (>$80M per year) line item to support extended mission after that.  Other programs do not have this type of funding bucket to pull from for extended missions.  This may be particularly important for the Cassini mission, where the Outer Planets budget drops from a projected $79M (FY14) to around $25M by FY16.

Per the budget documents, “The [Cassini] Solstice mission [now funded] will continue to operate and conduct data analysis through September 2015, at which time it will undergo competitive Senior Review with all other PSD operating missions.  Pending successful Senior Review in 2015, the mission will conclude in 2018, after another 155 revolutions around the planet, 54 flybys of Titan, and 11 flybys of Enceladus.”  However, if operations are to be funded from 2015 to 2018, NASA will need to find new funds to support Cassini.

Editorial Thoughts:  When I started this blog, I decided it would not be an advocacy blog.  Other organizations, particularly the Planetary Society, do an excellent job of advocacy.  As you can read on the Planetary Society blog, the reaction to this budget is not positive.  (See 2014 NASA Budget Cuts $200 million from Planetary Science -- Again and Bad Budget News for NASA's Planetary Exploration Program.)

I’m pleased to see the increase to the Discovery program that will increase the number of missions that will fly per decade.  This has been an incredibly successful program; the whack the program took in the FY13 proposed budget, if maintained, would have been devastating.

I’m disappointed to see the budget ruling out any chance for a Europa mission, but I had expected this.  The administration has decided to put its planetary Flagship (>$1B missions) dollars into Mars.  I hope that Congress continues to push for funding for a Europa mission and inserting it into the budget.  I really want to see the Europa Clipper mission fly.

I am worried about the future of the Cassini mission.  While the budget document talks about the possibility of an extended mission to 2018, there isn’t a budget bucket to pull the dollars from.  My experience with budgets over a couple of careers has been to view money as either there or not.  So I am worried and hope that my worry will prove to be for naught.  Here is how the budget document describes what a further extension of the Cassini mission would do: “In 2017, an encounter with Titan will change its orbit in such a way that, at closest approach to Saturn, it will be only 3,000 kilometers above the planet’s cloud tops, and below the inner edge of the D ring. This sequence of approximately 15 ‘proximal orbits’ will provide an opportunity for an entirely different mission for the Cassini spacecraft, investigating science questions never anticipated at the time Cassini was launched. Cassini completed its prime mission in July 2008, completed its Equinox extended mission in July 2010, and began the Solstice extended mission in October 2010. The Cassini mission will end when another encounter with Titan will send the Cassini probe into Saturn’s atmosphere.”  What is at stake is the ability for the Cassini mission to begin an entirely new mission in its close orbits that will capture much of the science that the Juno mission will for Jupiter. 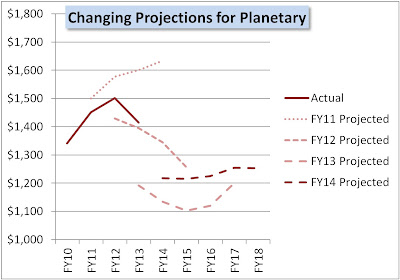 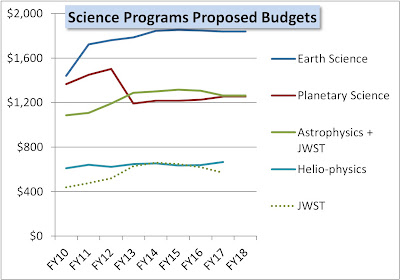