A conference on the  Europa Jupiter System Mission (EJSM) has just completed, and the presentations are a treasure trove of information on the proposed missions from three space agencies.  (The presentation from the fourth, the Russian space agency, has not been posted.)  The conference focused on the science questions and goals for these missions, and I recommend reading them (http://jakal.sp.ph.ic.ac.uk/EJSM/#Presentations)

This is the next to last post in a series that looks at the science of the EJSM missions (see Satellites, Jupiter, and Magnetosphere), with a focus on science other than that which would be done in orbit around Ganymede and Europa.  In this post, I’ll summarize the proposal for penetrators for Ganymede and Europa.  These are not the only lander concepts that are being investigated.  A conference was held last year to discuss lander missions that range from a very large Russian lander to small hard impact landers and penetrators.  I summarized these concepts in two blog posts (Russian Lander and Small Landers) or your can read the presentions at http://www.iki.rssi.ru/conf/2009elw/

At the more recent EJSM conference, presentations were given on the large Russian lander (not posted at the time I write this) and for a small penetrator that would be carried by the Jupiter Ganymede Orbiter and the Jupiter Europa Orbiter (see Europa Surface Element presentation).  The penetrator would weigh just 15 kg with 1 kg for science instruments.  The deorbit module for Ganymede would weigh 70 kg.  After achieving orbit around its target moon, the orbiter would release the penetrator, the deorbit module would perform the deorbit maneuver and orient the penetrator for impact.  Penetration into the surface would be a half to a full meter.  Polar landing locations would provide optimum data relay opportunities since the orbiter would pass over the poles each orbit but over each equatorial location just twice twice for every revolution of the moon around Jupiter. Surface lifetime for the penetrator would be just two orbits of the moon around Jupiter (~7 days for Europa and ~14 days for Ganymede).  [No explanation is given for why the Europa lander would not also operate for 14 days.  It seems unlikely to be due to radiation; the penetrator will have already been subjected to intense radiation while still attached to the orbiter.] 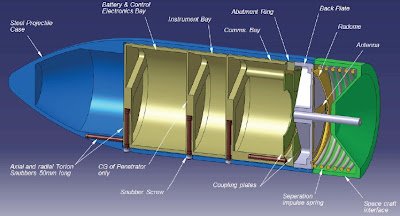 The scientific goals for the penetrator would focus on the internal structure of the moons, surface composition, and surface strength and mechanical characteristics.  The core payload would be a seismometer to study the internal structure of the moon, which would consume a third of the payload mass.  A number of other instruments could also be added.  One slide lists a possible instrument compliment that adds a mass spectrometer, accelerometer, thermal sensor, descent imager, and a magnetometer.  The slide notes that including the descent imager could pose problems for the other instruments sampling the surface.

Not discussed in this presentation is a possible enhancement that would essentially be a mini-probe carried within the penetrator that has received some publicity lately (see thermal drill article).  This would be a thermal drill that would melt and drill its way to depths as great as 10 m below the surface where the material should be free of chemical changes caused by radiation.  The unit would be a small, self contained package that would leave the body of the penetrator but remain connected by wires for power and communications.  A paper in Advances in Space Research is vague about what kinds of useful instruments could fit within the small body of the unit: “A melting system could sample waters which are transported into the instrument by the use of a micro-pump. A series of filters retains biogenic material, if present, for further analysis by an optical microscope, a chemical micro-laboratory or spectrometry.  Gases, as indicators of biological activity, could be acquired by this combination of heating and drilling... Current GCMSs are not suited to be integrated into the thermal drill itself (due to size), but could eventually be mounted inside the penetrator... A wet experiment was developed for the Deep-Space-2 penetrators and tested in impact trials.”

Editorial Thoughts: Penetrators would significantly enhance the science return from these missions, and I hope they will be flown.  As I understand it, neither ESA nor NASA are planning to pay for their development.  Their inclusion into the mission would require another national space agency to fund the development.  The presentation on penetrators was made by the Penetrator Consortium, a group of researchers located primarily in Britain.  (The site has several interesting presentations on penetrator concepts for various solar system targets.)

The presentation at the EJSM conference and those at the consortium website suggest that the primary focus for now is on a penetrator for Ganymede.  Analysis of for a Europa penetrator has several "to be determined" entries, with the key one probably being whether the penetrator's electronics could withstand the radiation dose as the orbiter maneuvers into Europa orbiter and then in Europa's orbit.  It's hard enough to design electronics that can withstand slamming into an icy surface.  Designing electronics that could also withstand the radiation may be too difficult.  However, the metal body of the penetrator would provide some shielding and perhaps additional shielding could be carried by the orbiter (think of the penetrator and deorbit module inside a box or tube mounted on the orbiter).

And I am disappointed that there’s no mention of a surface camera.  I understand the problems of including a deployable mast in a small penetrator.  Still, it would be wonderful to see Jupiter in the sky above these moons.