The Mars III workshop was help at the end of March into early April.  Unlike many conferences, this one didn't focus on the latest findings reported in 15-20 minute presentations.  Instead, this workshop was a synthesis with a goal "to integrate the main results of both the recent Earth-based observations and the missions to Mars (MarsExpress, Mars Reconnaissance Orbiter, Phoenix and Mars Exploration Rovers) into a new global picture of Mars evolution."  As such, the presentations that are posted are fantastic tutorials on a wide range of topics, from the geological history, to the climate, to the interior structure.  Typical presentations (presumably with time for questions) lasted one-and-a-half hours.  A series of hour long presentations on current and recently ended (Phoenix) missions and thirty minute presentations on future missions rounded out the program.

If you are interested in Mars, this is a great place to spend some time.

I found three slides in the introduction presentation by Jack Mustard, particularly interesting.  The two following slides present key questions that dominated the field ten years ago and the key questions that dominate the field today.  Note how little overlap there is.  The past decade of exploration has done a great job of answering what had been the key questions, but of course that just led to new questions for the coming decade.  The exception to this story was studies of the Martian interior which largely will remain on hold until a network of geophysical landers is eventually flown.  (The presentation on network missions gives the long and sad history of attempts to get a network mission flown.  Best current hope is for a mission around 2020, assuming that it once again is not bumped to fund higher priority missions.) 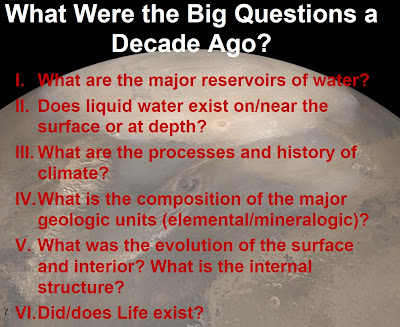 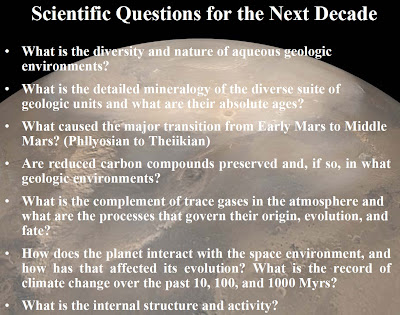 The third slide from Mustard's presentation provides the goals for exploration of the terrestrial worlds (which would in this context include the other half of our double world system, our own moon).  All are key questions to understanding the evolution of our own world.  I am beginning to feel that the goal for the next decade of exploration should be twin focuses on the terrestrial planets (with Mars receiving the bulk of the money and attention, but significant missions to Venus and/or the moon) and on the icy moons of Jupiter and Titan as possible abodes of life.  Perhaps $5B to each set of missions, leaving ~$2B for Discovery class missions to asteroids and comets.  While this would leave many missions I would very much like to see fly such as the Io Volcano Explorer and the Argo Neptune-Triton flyby, the success at Mars in answering a string of high priority questions in the past decade shows the power of focusing exploration. 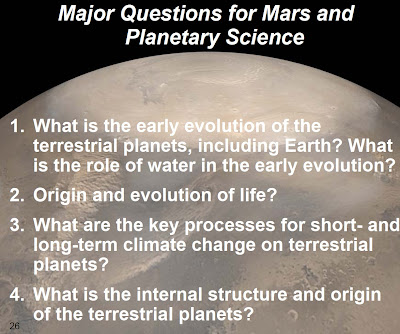