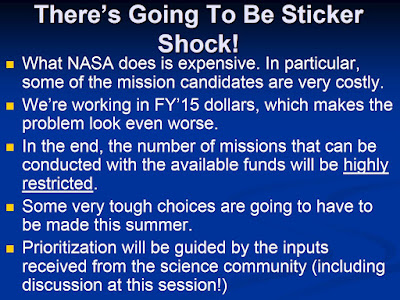 Other than these updates, formal news from the Survey has been scarce.  Each of the working panels have been meeting over the past month in closed session to work on their reports.  Several news articles, including one in the subscription only version of Aviation Week and Space Technology, have been touting the search for present and past life as an overarching theme likely to emerge from the Survey.  (See a summary of the Aviation Week article here or the Space Daily article.)

Each of the science panels (inner planets, Mars, giant planets, etc.) has been including science goals that link to astrobiology (See slides at end of this blog entry from Squyres' presentation).  For Mars and the outer planet satellites, this is easy since they include habitats that could be past or present abodes of life.  For the inner planets and primitive bodies, the goal is to tie into the evolution of habitable worlds.  Only the giant planets has not been able to find a tie to astrobiology.

The Aviation Week article lists several missions that best tie to an astrobiology theme; I've included possible costs that I've read in the past, but not Squyers' warning about sticker shock.  (Note, for the purposes of the Survey, the decade runs from 2013 through 2022.)


Add this up, and assume 2-4 Discovery missions for those destinations without an astrobiology tie, and this would pretty well fill the expected budget of $12-13B over the decadal period (FY11 dollars).

One of Squyres' slides showed a schedule for the Survey's meetings.  It showed that the results of the analyses of candidate missions will be available to the Survey in July of this year.  It's not clear when those results will be made public.

Astrobiology
Evolution of [potentially] habitable worlds
Non-astrobiology Missions
In another area of Squyres' presentation, reemphasized that only missions that already flying or have formal new starts are excluded from the Decadal Survey's review.  The missions in development that have formal new starts, plus the next New Frontiers selection (since the selection is in progress) are listed below:
Missions still to launch not included in Decadal Survey:

The following slides are from Squyres' presentation and list the science goals of each sub-discipline (astrobiology goals are presumably highlighted since Squyres was presenting at an astrobiology conference). 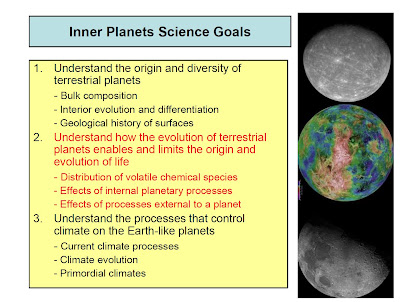 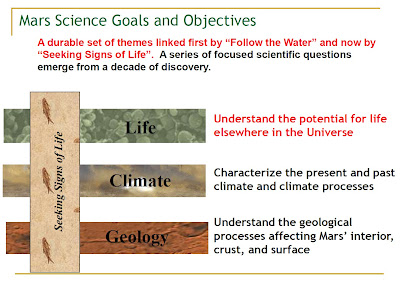 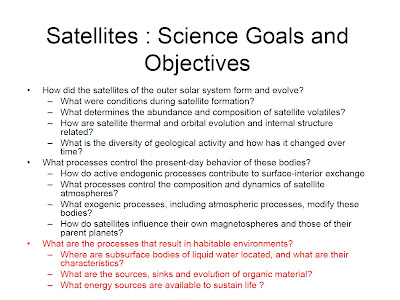 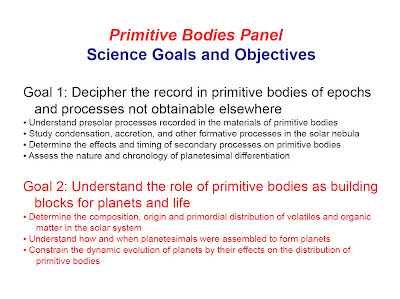 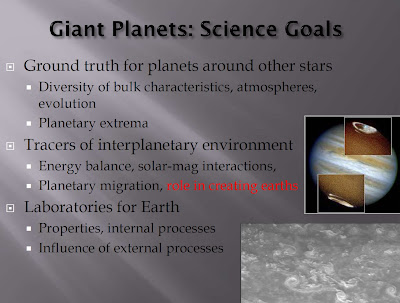