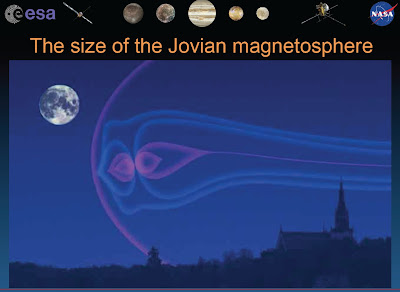 Across the universe, plasmas are the dominant form of baryonic matter (that is the particles that make up the universe we can see and touch).  Many missions have been flown to investigate the (magnetic) fields and (charged or ionized) particles within them, both around our own planet and around the sun and other planets.  This blog entry continues the series that looks at contributions that the Europa Jupiter System Mission can make beyond the studies of the primary targets, Europa and Ganymede.  Although this entry will touch upon those worlds since understanding the magnetic and radiation fields at those two moons are key to exploring them.  The interaction of these moons with Jupiter's magnetosphere is a key method to explore their interior oceans, and the radiation delivered to Europa's surface may be a key source of energy to create the organic compounds that might enable life within its ocean.

Slides are from a presentation given at the last OPAG meeting in February (http://www.lpi.usra.edu/opag/feb2010/presentations/KruppEJSMSynergisticScience.pdf).

Before I get too far into the topic, I'll be the first to admit that I lack the training in physics to properly understand this field, so I apologize if I don't go into depth (and for any mistakes I make).  This is also not a topic that receives a lot of public attention.  There's no pretty pictures (beyond auroras) and little that we can compare to our everyday lives.  However, Jupiter offers an extreme laboratory to study magnetospheres and their plasmas.  To quote from Wikipedia (http://en.wikipedia.org/wiki/Jupiter#Magnetosphere and http://en.wikipedia.org/wiki/Magnetosphere_of_Jupiter):


"Jupiter's broad magnetic field is 14 times as strong as the Earth's... making it the strongest in the Solar System (except for sunspots). This field is believed to be generated by eddy currents — swirling movements of conducting materials—within the metallic hydrogen core. The field traps a sheet of ionized particles from the solar wind, generating a highly energetic magnetic field outside the planet — the magnetosphere. Electrons from this plasma sheet ionize the torus-shaped cloud of sulfur dioxide generated by the tectonic activity on the moon Io. Hydrogen particles from Jupiter's atmosphere are also trapped in the magnetosphere."
"The action of the magnetosphere traps and accelerates particles, producing intense belts of radiation similar to Earth's Van Allen belts, but thousands of times stronger. The interaction of energetic particles with the surfaces of Jupiter's largest moons markedly affects their chemical and physical properties. Those same particles also affect and are affected by the motions of the particles within Jupiter's tenuous planetary ring system. Radiation belts present a significant hazard for spacecraft and potentially to humans."
Both NASA's Jupiter Europa Orbiter and ESA's Jupiter Ganymede Orbiter will carry advanced sets of instruments for studying magnetic fields and their plasmas such as megnetometeris, plasma/energetic particle packages, UV spectrometers, plasma wave instruments, and ion/neutral mass spectrometers.  The JGO spacecraft may also carry an energetic neutral atom (ENA) camera (http://en.wikipedia.org/wiki/Energetic_neutral_atom) to image particles within the magnetosphere similar to the instrument carried by the Cassini spacecraft at Saturn.

The true power of the mission, though, comes from having two spacecraft in orbit around Jupiter at the same time that can measure conditions at different places within the magnetosphere.  That capability may be substantially enhanced with the addition of a dedicated Jupiter Magnetospheric Orbiter supplied by the Japanese JAXA space agency. 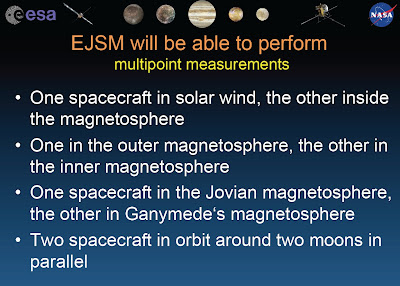 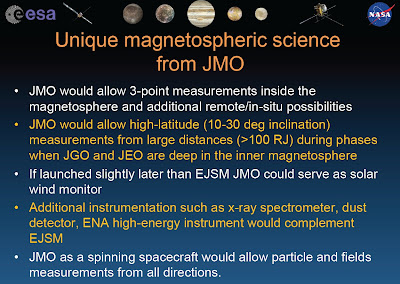 This is the third in a series of posts that look at the science of the EJSM mission.  You may also want to check out EJSM Jupiter Science and EJSM Satellite Flyby Science.