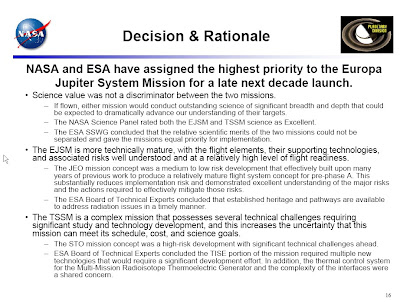 From http://www.lpi.usra.edu/opag/march09/presentations/02Niebur.pdf
Most of us have seen concepts for planetary missions that simply sound too good not to fly. Some of my favorites are landers for Venus, comet sample returns, and networks of small landers for Mars. Word on the street has it that these missions have been proposed for NASA's New Frontiers (~$650M) and Discovery ($350-450M) programs. None have flown.

Sometimes the reasons good mission concepts don't fly is because of technical readiness (Neptune orbiters, for example), higher priority missions (Mars network landers), or simply too little money (Europa orbiters). Sometimes the proposers simply make silly mistakes in their proposals. Steven Squyres wrote in his book of a team he led proposing an instrument and simply reversing some key dimensions.

Usually NASA is quite tight-lipped about why missions aren't selected (or even disclosing which are proposed, except for those that become semi-finalists). We know that NASA conducts a thorough review (as does ESA in its competitions). The reviews concentrate on the importance of the science to be conducted, the ability of the mission to answer the key scientific questions, and the technical readiness of the proposal.

The recent competition between Jupiter System and Titan System missions for the next outer planets target provides a rare exception. In this case, NASA released the findings of the review boards for the NASA-led orbiter missions. (I don't know if ESA will release equivalent information for its contributions.) The Jupiter-Europa orbiter essentially received all thumbs up in all categories. This isn't surprising given that the mission had several previous full definition efforts over the last decade or so.

The Titan orbiter wasn't so fortunate. It received top marks for the science questions and for the ability of the proposed mission to address them. However, it fell short in a number of areas (see below) for technical readiness of the concept. That the proposing did so well starting from scratch just a couple of years ago speaks to the effort and expertise they put into the mission. I expect that once the Titan mission has had its own multi-year effort at definition and working issues, that it too will achieve high technical readiness.

The list of short comings found by the reiview team follows. Note how specific they are. I am told that it is not unusual for a mission proposal that would perform a great science mission to fail in a competition for similar reasons. The lesson is that putting together a winning proposal is hard. It must do something new to had exciting science, but at the same time the mission design and technology readiness have to be at a high level. This is a tough bar to clear.

Issues with the Titan orbiter proposal, from the presentation at the last OPAG meeting:


There was one additional issue that leads to bigger questions that I'll address in the next blog entry.