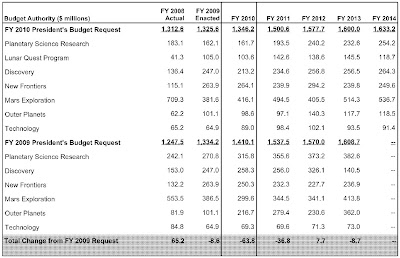 From http://www.nasa.gov/pdf/344768main_science_3_astro.pdf. Click for larger view.
President Obama's proposed budget for NASA in fiscal year 2010 (which starts October 1, 2009) was released today. Before going into the details for future planetary missions, I'll give a brief overview of the U.S. budgeting process. The President proposes a budget for the entire federal government. However it is Congress which actually writes the funding bills. Since the U.S. Congress has two houses, each passes its own version of the budget. These are then reconciled in a final budget bill which doesn't become law unless the President signs it. The result is a series of compromises in which the final spending bill may be quite different than what was initially proposed. In recent years, the conflict between political parties has been so great that Congress has not been able to agree on a federal budget. In those cases, federal agencies, including NASA, are funded at the previous year's funding rates.

The proposed FY10 budget essentially is flat with the budgets of the last three years. (The budget projects gradual increases over the four years following FY10, but this projection is for NASA's planning purposes and has no force of law.) The budget continues the planetary program that has been in place over the last several years. The Mars program is the largest line item with 30% of the budget. The New Frontiers program is funded at a rate that allows for new missions of approximately $650M approximately every 3 - 4 years. New Discovery (~$450M) can be started approximately every two years.

One program that has received substantial new funding starting in this current fiscal year is the Lunar Quest program. This program funds research programs and modest robotic missions. (The latter will be the topic of a future blog entry.)

The Outer Planets program, which funds data analysis, Cassini operations, and preparatory work for the Jupiter-Europa orbiter (JEO) mission remains modest ($98M) in this and projected budgets. The primary funding for JEO starts after the current budget window.

Editorial Thoughts: The Obama administration has decided to continue the planetary program at its current levels. Within NASA's science program, only the Earth observation program was singled out for significant increase. (Most of that increase comes from the previously enacted Recovery Act.)

If the budget plan presented is funded at approximately these levels over the next few years, then the planetary program will continue to be robust. I see two potential threats to this plan. The first is the size of the federal budget deficit. NASA (and much of the federal government) is funded by a combination of borrowing and printing money. Any of several changes in the global finance system could make this more difficult. As a discretionary program, the planetary program could suffer as a result. The other threat I see is that NASA's budget is not sufficient to keep the manned Exploration program on schedule and fund the science program as envisioned. If the administration and Congress decided to prioritize the manned program, then the entire science program is likely to see substantial cuts in future years.

A final thought is that after 2014 (as far as the current budget projects go), JEO will need substantial funding averaging several hundred million dollars per year for around five years. If the planetary program continues to be funded as foreseen in this budget plan, then funding JEO will mean decreasing funding for other parts of the planetary program. My back of the envelope (and therefore wrong in the details) figures show that the needed funding would about equal what is projected for the Mars program in 2014 or the combination of the New Frontiers and Discovery programs in the same year. Put another way, building JEO would seem to require substantial cuts to other parts of the planetary program. 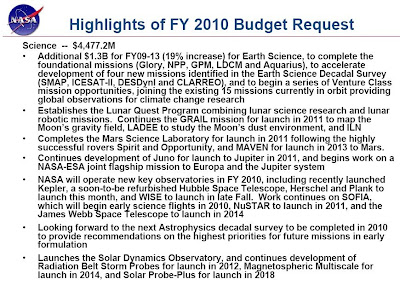