What Next for Titan? 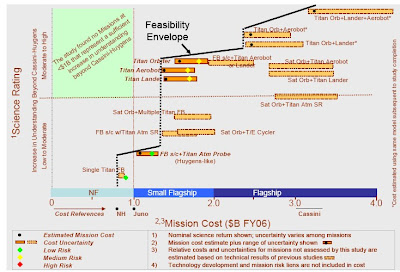 “The NASA-only mission, consisting of only a Titan orbiter as described in the Final Report, clearly makes fundamental advances in our understanding of Titan and Enceladus. However, in the absence of an in situ element, the mission falls short of providing the fundamental advances expected of flagship missions such as Galileo and Cassini.”

The proposed Titan-Saturn orbiter mission represented a $2.5B (FY07 dollars) mission. (If the issues listed in the previous blog entry were addressed, the mission may in reality have been more.) If $2.5B doesn't buy a Titan-Enceladus mission worth doing, is future exploration of Titan realistic? Is an investment of $3.5-4B (an approximate cost with the ESA lake lander and balloon added) the minimum increment needed to continue exploring Titan.

Based on recent and projected budgets, NASA and ESA do planetary missions of this scope just once a decade. That would put the launch of a return to Titan and Enceladus into the late 2020s or 2030s. That mission proposal would have to compete with other missions of this scope such as a Mars sample return or a Venus Flagship mission.

A NASA report published in 2006 looked at missions to either or both of these moons that would have cost substantially less than a Flagship mission ($2-4B). It also gave a range of estimated costs and judgement as to whether the mission would provide science value worth the cost. Here is a list of the missions (quoted from the report with costs reported elsewhere in the report added by me in brackets):

The unfortunate message is that any scientifically justifiable return to Titan and Enceladus seems to run between $1.3-1.9B. (My guess is that the high range of the estimates may be more realistic of actual costs given the propensity of costs to increase as serious design work and hardware manufacture and testing begins.) Given that the TSSM orbiter would have cost $2.5B, and it would not have sufficiently enhanced our knowledge for the cost, the bar for returning to these worlds could be unobtainable for the next decade.

Two possibilities, though, give me hope. First, Ellen Stofan has a Discovery-class Titan lake lander proposal. I've not seen the presentation, but a friend who has tells me that it is less capable than the ESA lake lander proposed for TSSM. (This would make sense – ESA had a budget of ~$1B for just the lake lander and balloon. Stofan has just $450M and has to fit a carrier craft and launch vehicle into that budget.) The 2007 report did not look at lake landers. I know of Stofan by reputation, and she's highly competent. However, fitting in a carrier, lander (with entry shell), and launch vehicle within a Discovery mission budget seems ambitious. Perhaps this could be done with a New Frontiers budget ($650M with the launch vehicle provided by NASA outside this budget), although the 2007 budget suggested that a budget twice this amount would be needed just for an atmopheric probe.

The other possibility that is see comes from the Io Volcano Observer mission, which is another Discovery-class mission proposal. Perhaps a craft of similar capability (included a tightly constrained instrument suite) could be flown to orbit Saturn and flyby Titan and possibly Enceladus as well. The 2007 report stated that this mission wasn't scientifically justified since the incremental return in information beyond Cassini would not be worth the approximately $1.5-2.0B cost. A return mission, however, could carry cameras that could make use of spectral windows in Titan's haze to better image the surface and a more capable mass spectrometer to analyze Enceladus' plumes. If such a mission could be done for $450-650M, the cost-benefit ratio would be favorable.

The issues listed above certainly are well known to the planetary science community. Now that there are no plans to return to Titan with a Flagship mission earlier than the 2030s, I expect that the community will be looking for clever, tightly focused missions to return earlier. I expect that we may see a proposal or two like this proposed for consideration in the Decadal Survey in progress.