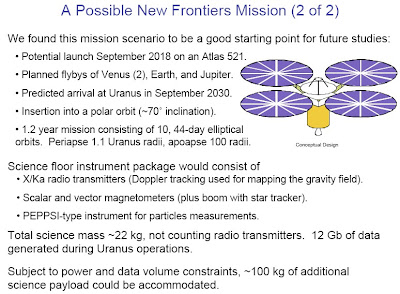 Presentations from the March OPAG meeting continue to trickle onto the website. Today I found a short presentation on a concept study for a Uranus orbiter. JPL has a team that looks at possible mission concepts, both to see what could be done with today's technology and what technologies would be needed to enable certain missions. (Talk about a dream job!)

The goal of this study seems to have been two fold: First to see if a Uranus orbiter could be done within a New Frontiers budget cap ($650M not including launch vehicle) and second whether a solar powered mission could be done. The answer to the first question was not quite. The final mission price tag was around $715M. The answer to the second question was just barely. The solar panels would produce about 100W at Uranus. As the presentation says, "Power is a significant constraint, but batteries, radioisotope heating units, and phasing of instrument on/off times would allow the needed science return with solar panels producing only 100 W."

The mission that would fit into that price figure would be tightly constrained. The only instruments would be an ultra stable radio system for gravity studies, magnetometers, and a fields and particles instrument. This would be a Juno like mission without Juno's microwave radiometer for deep sounding into the Uranus atmosphere, the ultraviolet and near IR spectrometers, and the wide angle camera. (I have read that a microwave radiometer might not be useful for Uranus and Neptune because of the depth of the water layers in their atmospheres, but this is an old memory and I can't find the reference.)

Editorial Thoughts: I don't think that a $715M mission with this limited of an instrument set would be a competitive New Frontiers mission. I would want at least the instrument set of the New Horizons craft for a return to Uranus. Juno was a competitive proposal, in my opinion, because its microwave radiometer addressed fundamental questions about the structure and composition of gas giants and the mission carried out a number of other key studies enabled by the mission's orbit. I don't think that Juno without the microwave radiometer would have been a successful proposal.

This proposal does get me thinking about potential strategies for mid-cost missions to the outer solar system. The New Horizon flyby mission to Pluto and a KBO required a New Frontiers budget. This study says that a craft that is in many ways simpler would require a bit more than a New Frontiers budget. The Io Volcano Observer team says that it could do a Jupiter orbiter-Io flyby mission for around $500M, which puts it at the low end of estimates for outer planet missions.

Right now, the only options for outer planet missions are Flagship missions ($3B), or missions stripped to the bone to fit into New Frontiers budgets (or if the IVO estimates are correct) into Discovery-plus missions.

If the Decadal Survey wanted to increase the priority of outer planet missions, it could get creative. Generally, I've read, the cost of a second close copy of a spacecraft is around 60% of the cost of the first. Let's say that a reasonably instrumented outer planet craft mission cost $800. That price would bust a New Frontiers budget. However, for the price of two New Frontiers missions, two craft could be built if they were near duplicates of each other. The Decadal Survey could call for two New Frontiers competitions to be combined. NASA would provide two core spacecraft that presumably would allow some mission specific configuration (say, to carry enough fuel to enter orbit around an outer planet or two carry and atmospheric probe on a flyby mission). Then NASA could hold a competition to determine which specific missions each craft would conduct.

With a little thought, I can think of a number of possible candidate missions: A Saturn multiprobe to study the atmosphere, a simple Saturn orbiter to continue studies of Enceladus and Titan with 2-3 instruments with capabilities greater than those on Cassini, a Uranus orbiter, a Trojan or Centaur asteroid flyby or rendezvous, a Neptune-KBO flyby mission, and perhaps an Io observer if the radiation hardening could be done for a common design.

The easy answer out of the Decadal Survey would be to just continue the current planetary exploration program of regular Mars missions supplemented with three Discovery and two New Frontiers missions. (I still haven't figured out how the Jupiter-Europa mission gets included within this budget framework.) The ideas above, which are little more than day dreaming, are one example of alternative approaches. Are these daydreams better than the current direction, probably not. I do hope, though, that the Decadal Survey will look at lots of innovative approaches.