The National Research Council just released its report justifying the restart of production of plutonium 238 to enable future space missions. (Start up money for that production is in the proposed FY10 budget for the Department of Energy.) Several of the charts are interesting in their own right. Click on any of the images for a larger view. 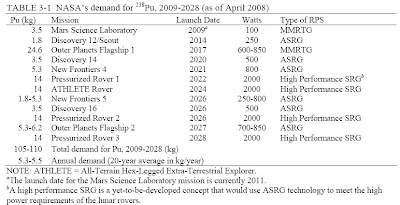 This chart gives the current expectations for future planetary missions. It assumes that Discovery missions are started every three years and that every other selection will use ASRGs (Advanced Stirling Radioisotope Generator). New Frontiers missions would launch every six years. Unfortunately, the launch date for the fourth New Frontiers mission, 2021, would be too late to enable the Argo mission to Neptune and a KBO. Also, the list shows two outer planet flagship missions, but no follow-on Mars flagship mission after the Mars Science Laboratory.

The pressurized and Athelete rovers would be lunar rovers for manned exploration. (If you think I'm a cynic about Mars sample return missions, don't even get me started on manned lunar exploration on this scale. Sorties, maybe. Big bases? Yeah, sure.) 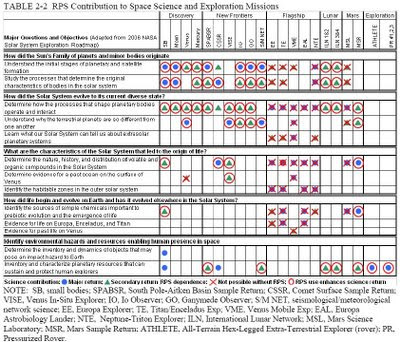 This chart is a laundry list of ideas for future planetary exploration. Unfortunately, only a small fraction of these missions are likely to fly. 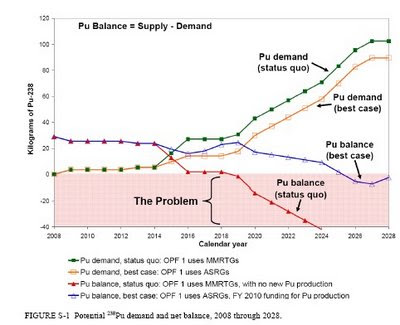 This chart shows why plutonium production needs to restart.