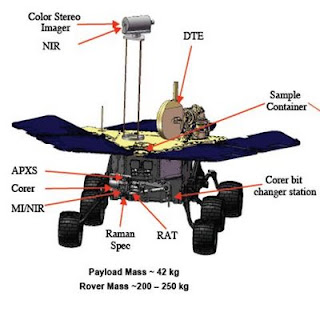 In a previous post, I discussed possible options for NASA Mars missions following the Mars Science Lab (MSL) and the Scout Maven upper atmosphere mission for 2013. In this post, I will discuss current thinking about a follow on rover mission.

There are three explicit goals for a next generation Mars rover:

o Launch within 6 to 8 years of MSL to keep the rover development team intact. This would require a launch by 2016 if MSL holds to its current 2009 launch.
o Explore a new type of Mars terrain that has an apparent history of an aqueous environment and therefore a possible past site of biological activity. The flotilla of Mars orbiters has identified at least 8 types of terrain with aqueous history. Opportunity is exploring one type, MSL will explore another, and hopefully ExoMars will explore a third. A 2016 rover would target yet another.
o Collect and cache a sample suite that could be retrieved by a future sample return mission.

And one implicit goal:

The 2016 rover would be larger than the MER rovers (~250kg vs 174kg) with ~11kg of instruments (vs 4.5kg for MER) plus the sample collection and caching system. A precision landing capability would require a landing system similar to MSL’s skycrane. Using solar power would reduce costs compared to MSL nuclear power system. Funding the development of the 2016 is stated to be difficult within projected budgets for that launch opportunity.

The current rover concept looks like MER, probably to emphasize its modest goals compared to MSL (I expect that the final design will be different than both).

A straw man science payload would be an expanded set of MER instruments. An alpha-proton-x-ray spectrometer would identify rock and soil elements. A near infrared (NIR) spectrometer replace’s MER’s mini thermal emission spectrometer (mini-TES) for remote mineral identification. A second NIR would work in conjunction with the microscopic imager for close up mineral identification. A Raman spectrometer would identify minerals, including those bearing carbon molecules. The sample cache system could be able to cache 20 rock cores and 3 regolith samples.

So far, this post has reported on the current thinking presented at Mars Exploration Program Analysis Group (MEPAG) meeting. What follows are my editorial comments. As currently envisioned, the 2016 rover would be a one of a kind mission flown in only one launch opportunity, like MER (but with two rovers) and MSL. I personally disagree with this plan. Designing and testing each rover and entry and landing system is an expensive proposition. Given limited Mars program funds, I think that flying one off mission designs is sub optimal. The Mars program has reused its orbiter designs across multiple missions. So far, though, the apparent reuse of rover design between missions has been much more limited.

In my opinion, the Mars program after 2013 should focus on exploring the diversity of Mars surface terrains. The 2016 opportunity should be used to fly the Mars Science Orbiter (MSO). This orbiter would study trace gases in the Martian atmosphere and continue climate studies. Most importantly for future rover missions, this orbiter could also carry a new high resolution camera to examine landing sites and enable traverse planning as well as act as a communications relay.

The next several Mars launch opportunities would then fly identical copies of the new rover design to study a variety of Martian terrains. This approach amortizes the high cost of the initial design and testing across multiple flights. It also gives us ground truth at multiple sites and ready to retrieve sample caches from a diversity of sites. Landing sites could either be selected by the whole community as done for MER and MSL, or principle investigators could compete with proposals to fly to particular locations.

There are issues with my proposal. The later flight date for the first rover flight creates a long delay after the MSL design (and hopefully its launch) making it hard to keep the design team together. Improvements in technology would make it impractical to refly the same design too many times (although subsystems could be enhanced between launches). Two to four launch opportunities (~4-8 years) seems to be the maximum practical before a redesign to make use of new technologies makes more sense than reusing an existing design. Another issue is that this roadmap has no place for a Mars network mission, which has the second highest science priority after a Mars sample return. One solution would be to fly the network mission in 2018 and delay the rover mission to 2020, although this exacerbates the problem of keeping the rover team intact. Another solution would be for another nation to fly the network stations with NASA providing communications relay with MSO.

I welcome your comments and alternative proposals.