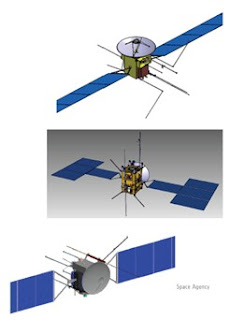 Current concepts for the JUICE spacecraft.  All illustrations are from the JUICE presentation at the recent OPAG meeting.

This time last year, both NASA and ESA were considering a joint mission to the Jovian system, with the former to concentrate on Europa and the latter on Ganymede.  Today, NASA’s budget outlook has caused it to abandon its plans for the Jupiter Europa Orbiter (although it is looking at ways to reduce costs to enable a Europa mission should budgets become increase).  ESA, however, is still considering its Jupiter-Ganymede orbiter as part of a competition to select is next large science mission.  The new moniker for the mission is JUICE for JUpiter ICy moon Explorer.

At the recent Outer Planets Analysis Group (OPAG) meeting, two members of the JUICE proposal team provided an update on their proposal.  Ganymede remains the focus of the mission, with the spacecraft studying it from orbit about the moon for the better part of a year with the final orbits just 200 kilometers from the surface.  The original mission also included a number of Callisto flybys that have been retained in modified form in the latest proposal. 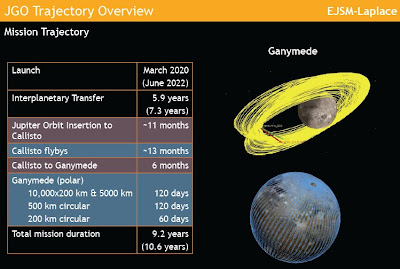 In the last few months, the JUICE team has looked at whether the mission could be enhanced to more thoroughly study the rest of the Jovian system, including Europa.  From the point of view of celestial mechanics, adding Europa flybys to the mission would be relatively straightforward.  Unfortunately Europa orbits Jupiter deep within that planet’s radiation belts.  Targeting Europa requires enhancing the radiation hardening of the spacecraft and instruments, increasing mass and costs.

In the end, the team is recommending just two flybys of Europa as a compromise.  The team looked at two options for those flybys.  One would have the spacecraft make its closest approach to Europa at different faces of the moon to maximize geophysical measurements of the gravity (mass distribution) and interaction of the subsurface ocean with Jupiter’s magnetosphere.  The second option would have the spacecraft fly over the same hemisphere and would focus on remote sensing surface composition measurements of high priority areas.  The team has chosen the latter approach both because detailed composition measurements of Europa from the Galileo mission were limited and to simplify the spacecraft design.  The proposal team recognizes that two flybys capture just a tiny fraction of the science that NASA Europa orbiter would have.  However, the team estimates that as many as 50 - 100 flybys would be needed to fully replace a dedicated Europa orbiter, which would require radiation hardening not feasible within the mission’s budget but which would also result in the loss of the rest of the science objectives of the mission, that of Ganymede and Jupiter system science. 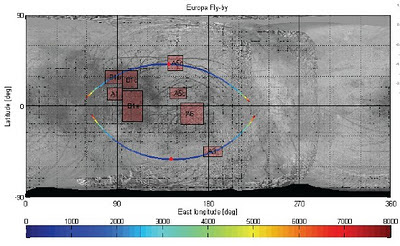 The team also looked for ways to enhance studies of Jupiter’s atmosphere and magnetosphere.  For both sets of studies, scientists would like to move the spacecraft out of Jupiter’s equatorial plane.  By doing so, the instruments can view the atmosphere at higher latitudes and get a better understanding of the three dimensional structure of Jupiter’s magnetic field and plasma fields.


The team proposes to incline the spacecraft’s orbit around Jupiter by 29 degrees by using the Callisto flybys to first pump up and then pump down the inclination.  There will be a price to pay for these orbital maneuvers.  The previous mission plan had the closest approaches to Callisto well distributed around the moon’s surface.  The new plan fixes the approach geometry so that the spacecraft follows nearly the same ground track for each flyby.  As a result, the instruments will see the same portion of the surface and sense the same area of the gravity field as a measure of internal structure for each flyby. 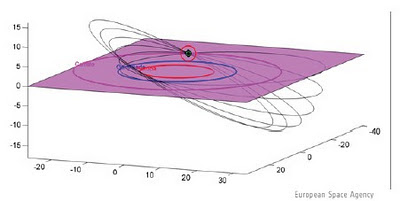 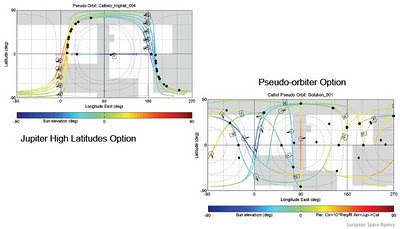 In the new plan, the JUICE spacecraft would follow nearly the same ground track for each Callisto flyby (left) instead of distributing the ground tracks around the moon as previously planned (right)
Unfortunately, Io remains too deep in Jupiter’s radiation field for the mission to flyby it.  Future studies of this moon will depend on the success of the proposers of the Io missions in future NASA New Frontiers and Discovery mission selections.

Currently three missions, JUICE and two astrophysics missions, are in contention for the single funding slot for the next ESA large science mission.   In February, ESA plans to select either its final choice or to eliminate one of the three with a final winner selected after further study.  If JUICE is selected, it would launch in 2020, with a backup launch opportunity in 2022.  Approximately six years later, the spacecraft would reach orbit.  Another two and a half years would be spent exploring the Jovian system and preparing to enter Ganymede orbit for ten months of orbital science observations before the mission ends.

Editorial Thoughts:  The budget for ESA’s next large science mission is capped, and major changes to the original Jupiter Ganymede Orbiter proposal are not possible.  The proposal team has done a nice job of enhancing the proposal with limited additional studies of Europa, Jupiter’s atmosphere, and the magnetosphere.

The other two missions in competition for selection by ESA are exciting astrophysics missions in their own right.  The competition is likely to be tough.   Barring a significant budget increase for NASA, however, JUICE appears to be our only option for exploring the icy moons of Jupiter in the next two decades.


My thanks to Michele Dougherty, Professor of Space Physics at Imperial College and Lead of the JUICE Science Study Team, for reviewing a draft of this post.