"...land at Thera, and you might be able to taste Europa's ocean!" 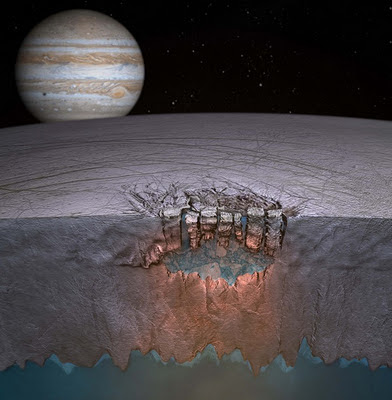 Artist's conception of a lake beneath a chaos region on Europa but above the global ocean.
Courtesy of University of Texas at Austin
"So for all of you people who were secretly hoping the thin-icers would win the argument because you are hoping to see humans send a probe onto Europa's surface and maybe even drill through the ice to its ocean, you have a consolation prize... land at Thera [Macula], and you might be able to taste Europa's ocean!"
Emily Lakdawalla,
Is Europa's ice thin or thick? At chaos terrain, it's both!,
The Planetary Society Blog

As many of you probably know by now, a paper to be published in the journal Nature next week postulates a new theory for the chaos terrain on Europa.  As the nomenclature implies, 'chaos terrains' are jumbled areas on the surface of Europa that appear to be huge blocks of ice scattered across the surface with rifts between them.  This new theory suggests that these areas are caused by the formation of large subsurface lakes beneath the surface.  Initially, the formation of the lake reduces volume beneath the surface (water fills less volume than ice), causing the surface to crack and collapse.  When the lake eventually refreezes, the volume expands pushing the shattered surface up into a dome.  The surface of a chaos region, then, is a mixture of surface ice and water that upwelled from the subterranean lake.  Current imaging suggests that up to 50% of Europa's surface represents chaos terrains ranging from fresh to old.  One area that looks to represent chaos terrain with an active lake with greater volume than all the great lakes of North America combined is Thera Macula.


These chaos regions appear to represent the best locations to sample the ocean that underlies the surface of ice at Europa.  Beneath that ocean lies a rocky core, which is tidally flexed and heated by the gravitational pull of Jupiter.  That puts the ocean in contact with minerals and energy (think of the hot vent plumes beneath the Earth's oceans) that could provide the mixture needed to support life.  In this respect, Europa may be unique among the icy worlds believed to have subterranean oceans.  On Ganymede and Titan, by contrast, the oceans would be sandwiched between layers of ice, removing the oceans from the minerals and heat needed to support life.  (A lively debate continues as to whether or not Enceladus' plumes come from an ocean in contact with the rocky core.)


The NASA press site has a summary of the findings and nice illustrations.  I recommend reading Emily's write up even if you've read this or other press accounts.  She does a nice job expanding on the press release.


Fortuitously, NASA has also asked a team of scientists and engineers to develop the concept for a minimalistic Europa lander mission.  This follows the definition of minimalistic mission concepts for an Europa orbiter and a multi-flyby mission (see my post, Europa - New Options) that would each cost approximately $1.5B (not including launch).  The hope is that the lander mission will also cost ~$1.5B, but that's not a requirement.


Since the team has yet to formulate it's plan, all details are subject to change.  However, I'll summarize the presentations giving the current thinking captured in the kick off meeting (presentations posted here). 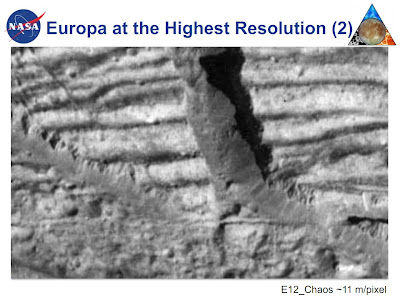 Europa's surface roughness presents a landing challenge.
Except as noted, all illustrations are from the Europa Lander Forum presentations posted at http://www.lpi.usra.edu/opag/Oct2011/lander_forum_presentations/

The surface of Europa at all scales at which it has been imaged (the best images come from the Galileo mission) looks forbidding to land on.  Jumbled surfaces of ice appear everywhere, especially in the now high priority chaos regions.  For this reason, the current concept includes two landers in the hope that one would make it to the surface intact.  The landers would descend under rocket power, much like the Mars Phoenix lander.  An instrument (lidar) would scan the surface to find the location with the smoothest surface, and the lander would steer itself to land there. 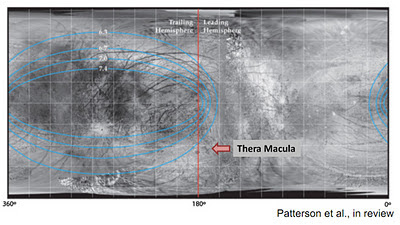 The jagged surface presents one problem.  The radiation at Europa presents another problem.  A radiation field surrounds Jupiter that becomes more intense closer to the planet.  Europa lies fairly deep within this field and an unshielded spacecraft either would have a short life (~1 month) or would require expensive radiation hardened electronics and a price tag well above $1.5B.  Here, the current concept proposes to use Europa itself as a radiation shield. 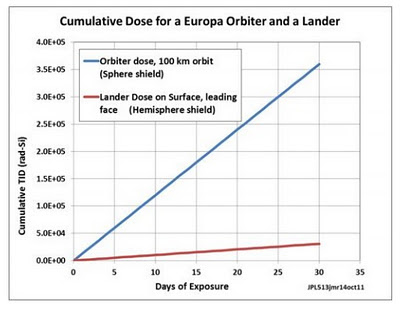 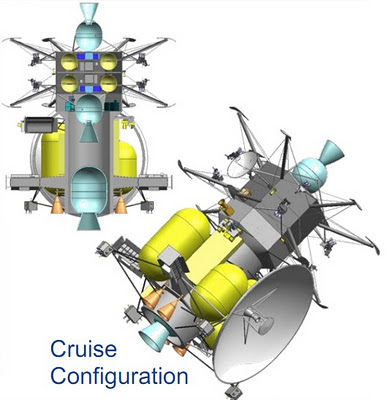 Concept for the orbiter and two lander stack

The landers would be carried into Europa orbit by a carrier spacecraft.  After entering Jupiter orbit, the combined spacecraft would perform sixteen Ganymede and Callisto flybys before entering Europa orbit.  (The presentation doesn't specify how many Europa flybys would be performed, although the goal would be to get into Europa orbit as quickly as possible to minimize time in the high radiation fields.)  After a few orbits around Europa, the first lander would be released with the second lander released at the same time or a few orbits later.  Once on the surface, the landers might either communicate directly with Earth or use the orbiting carrier craft for data relay. 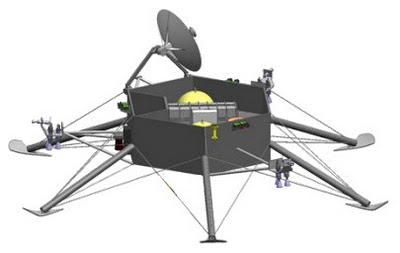 Concept for the lander

Many details of the mission are still to be worked out.  For example the landers might either be battery powered if they are to last just a few days or carry nuclear ASRG power sources to enable life for several weeks until radiation kills the electronics.  The concept images in the presentation show ASRG's on the carrier spacecraft and on each lander.


The minimum instrument compliment for the landers is one of the decisions to be made by the lander concept team.  The slides suggest that the minimum might a mass spectrometer to measure the surface composition, a seismometer to examine the subsurface structure, and a suite of physical state instruments to measure temperature, radiation, light levels, and acceleration (presumably from surface flexing).  An enhanced instrument suite might have more comprehensive chemistry and geophysical instruments as well as cameras.  A likely key decision for the concept team would be how the samples would be acquired for composition measurements -- arm and scoop, drill, ? 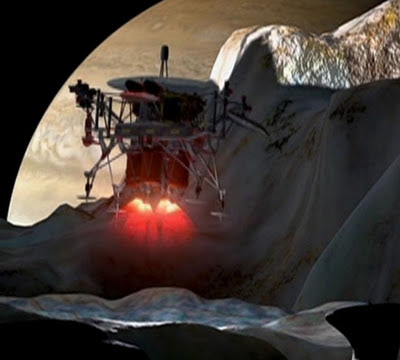 Artist's concept of landing within a chaos region on Europa

Editorial Thoughts:  Given the recent study suggesting ideal landing spots on Europa -- fresh chaos regions -- the idea of a landed mission as our next Europa mission becomes very attractive; hell, it is exciting.  To temper that excitement, however, remember that a simple orbiter with a few instruments or a simple multi-flyby spacecraft with a few instruments would each cost ~$1.5B.  This mission would require an orbiter plus two landers that each would have the approximate sophistication of the Mars Phoenix lander.  That feels tight for a $1.5B budget.


There is also the practical problem that most of Europa has not been imaged or spectrally mapped to determine surface composition at high resolution.  When we had a similar situation with Mars and the MER rovers, we selected a landing site for Spirit that looked at moderate resolution to be a lake bed but turned out to be a lava flow bed.  (Fortunately, Spirit reached hills above the lava flow that retained clear evidence for past watery environments.)  Unfortunately, our highest resolution imaging of Europa is on the trailing hemisphere, leaving the highly desirable low radiation leading hemisphere terra fuzzy.


So, should the carrier spacecraft include a high resolution camera and spectrometer to image Europa during flybys prior to orbit insertion to select the best landing locations?  Orbital mechanics plays a dirty trick on us here.  Galileo imaged the trailing hemisphere at highest resolution because the natural location to encounter Europa at around the 3 o'clock position (again, looking down from above the northern hemisphere of the Jovian system).  At that position, the trailing hemisphere is fully illuminated and the desirable leading hemisphere is in darkness.  A mission that tries to get into Europa orbit as quickly as possible would face a similar problem.  Gravity assists can be used to walk the location of Europa encounters around the clock (so to speak) but at the cost of a longer mission and higher operation costs.


Once the carrier craft is in orbit, should it carry any instruments?  For a truly minimalistic mission, the simple answer is no.  However, much of the cost of the orbital science is getting to Europa and orbiting for a few days to a few weeks.  The orbiter's radio system would allow gravity mapping, a high priority measurement to study the interior of the moon.  I suspect that the temptation to carry at least a camera and a magnetometer (which enables inferences about the subsurface ocean through magnetic induction) would be strong.  (The orbit would dip to just five kilometers above the surface to deploy the probes where a simple camera's resolution might be ~5 m.)  The laser altimeter to measure the flexing of the surface to estimate ice thickness and the Langmuir probe to measure the particle and fields environment (and isolate their impact on the magnetometer measurements) might be too much.  I think a camera to document the terrain of the landing sites both to pick safer spot and to put the surface measurements in context would be strongly desired.


I would not be surprised to learn that the final cost estimates for this mission with any carrier craft instruments deemed necessary or minimal added cost will be above $1.5B.  Given that NASA's projected budgets cannot afford even a $1.5B mission, selling the political system on a, say, $2B orbiter plus two landers is probably not much harder than selling them on a $1.5B orbiter or multiflyby mission.


I'm hoping for good news out of this task force.