Portion of Venera 14 landing image.  Ted Stryk's website has the nicest versions of these images I've seen.
A bit over a year ago, I wrote that a return mission to Venus would be compelling because "We live on a terrestrial planet, and one on which we are undertaking a grand experiment to see what happens when we dramatically increase the proportion of greenhouse gases in the atmosphere.  As a result, I think that furthering our understanding of Venus as a terrestrial planet and a greenhouse atmosphere carried to extremes is a compelling target for exploration in the next decade."

While NASA has taken a pass on Venus for now, Europe has no missions in the offering, and Japan's Akatsuki mission is struggling to reach orbit, Russia has a mission planned for 2018.

Russia's Venera-D mission has gone through several iterations.  At one time, Russia had hoped that international cooperation might lead to a truly ambitious flotilla consisting of advanced orbiters, multiple balloons, and multiple landers.  The new plan appears to be a Russia-only mission, but one that is still ambitious with a capable orbiter and lander.  It is really three missions in one, with significant capabilities for studying the atmospheric structure and composition, the plasma environment enveloping the planet, the surface geology.

The orbiter will carry a number of spectrometers that will measure the structure and composition of the atmosphere from its top to the planetary surface.  One of its instruments, the interferometer spectrometer, will replace the Planetary Fourier Spectrometer that failed on the Venus Express mission that would have measured the atmospheric structure below the cloud tops.

A second suite of instruments on the main orbiter and a small sub-satellite will extend our studies of the plasma environment.  A key problem with studying plasmas environments is that they are dynamic, and it is hard to separate local conditions surrounding a single spacecraft from more global conditions.  The sub-satellite will provide a second point of measurement to compare results.

The atmospheric and plasma experiments will continue, and significantly extend, studies that have been made by previous missions extending as far back as the Pioneer Venus orbiter in the late 1970s and continuing today with the Venus Express mission and hopefully continuing with the Akatsuki mission if it can reach orbit.

For me, though, the key contribution of the Venera D mission will be a return to the surface.  The lander will explore a different terrain than previous landers, which landed either on the basaltic plains that cover most of the planet or on the fringes of the highlands.  Venera D will be targeted to explore the tessera highlands of Venus that rise, like continents, above the surrounding lowlands.

NASA studied a tessera lander as part of its recent Decadal Survey.  The authors of the report on the mission concept summarized the importance of a mission to these highlands: "The key science driver... is to measure the mineralogy and major elemental composition of tessera terrain, which is distinct from the plains and is yet unsampled... Tesseara terrains appears.. as the oldest material on a planet where the average surface age is ~500 million years.  Thus, the tessera proved the best chance to access rocks that are derived from teh first 80% of the history of the planet, an era for which we currently have no information."

In many ways, the lander portion of Venera D is similar to the twice proposed New Frontiers SAGE Venus lander.  A comparison of their instrument lists shows that both missions would have similar capabilities.  In its most recent incarnation, the SAGE lander was targeted toward an area that Venus Express scientists believe may have been covered with recent lava flows.  Should both missions fly, we will have sampled the dominant younger (<500 M years old) plains of Venus with the older Venera landers, possibly the much older surface on a tessera, and possibly the some of the youngest surface with SAGE. 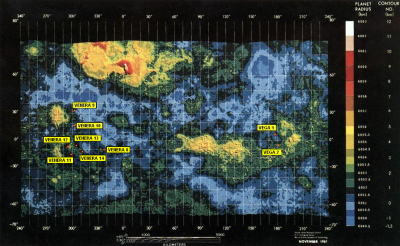 Location of previous Venera landing sites from the Wikipedia article on the Venera landers.

Editorial Thoughts: Venera D is an exciting mission.  I don't know whether it is a fully approved mission, or whether it is still a mission concept that needs to be formally approved by the Russian government.  (If any of you have insight into its status, please post a comment.)  A recent conference abstract (link below) says the mission is in Phase A, which is the earliest phase of a mission's conceptual definition and design.  This would be normal for a mission still six years from launch.

You can read Ted Stryk's summary of the Venera D mission (which provided essential background for this post) at http://planetary.org/blog/article/00003210/.  He also posted a photograph of a poster on the mission from a recent conference.

I wrote a post on NASA's tessra lander concept, which you can read at http://futureplanets.blogspot.com/2010/06/venus-tessera-lander-concept.html.You can read NASA report on its tessera mission concept at http://ia600505.us.archive.org/30/items/VenusIntrepidTesseraLanderConceptStudy/03_Venus_Intrepid_Tessera_Lander.pdf

There is a summary of the SAGE mission proposal at http://lasp.colorado.edu/sage/archives/PDF/SAGE%20Fact%20Sheet-p6_for%20print_April-21-2010.pdf

I wrote a post on previous concepts for international Venus missions that would have been more capable than the current concept for Venera D: http://futureplanets.blogspot.com/2010/01/russian-and-european-venus-ambitions.html